Hailey King did those two things time and time again on the second stop of the PDGA National Tour at the Dynamic Discs Open and, as a result, she left Emporia with a glass-blown trophy.

After three rounds of back-and-forth scoring, King pulled away from Catrina Allen at the Emporia Country Club on Saturday for a six-shot victory, her second National Tour victory in as many months and the second PDGA Elite Series win of her young and burgeoning career.

“It feels really good,” King told the Disc Golf Network’s Nate Perkins. “I was throwing the disc well and I was being confident.

King, who took down the 26th Annual Texas State Disc Golf Championship in March, let her play do the talking. Cool, calm and collected as she and Allen exchanged the lead over the first three rounds and into the finale, King showed tempered emotion throughout the final nine holes – a mini flex after a ripping drive on hole 14 and a big smile with a leap walking to the 18th, the victory locked-in.

It was King’s blend of aggressiveness, confidence and cool-under-pressure mentality that was once again on display throughout. 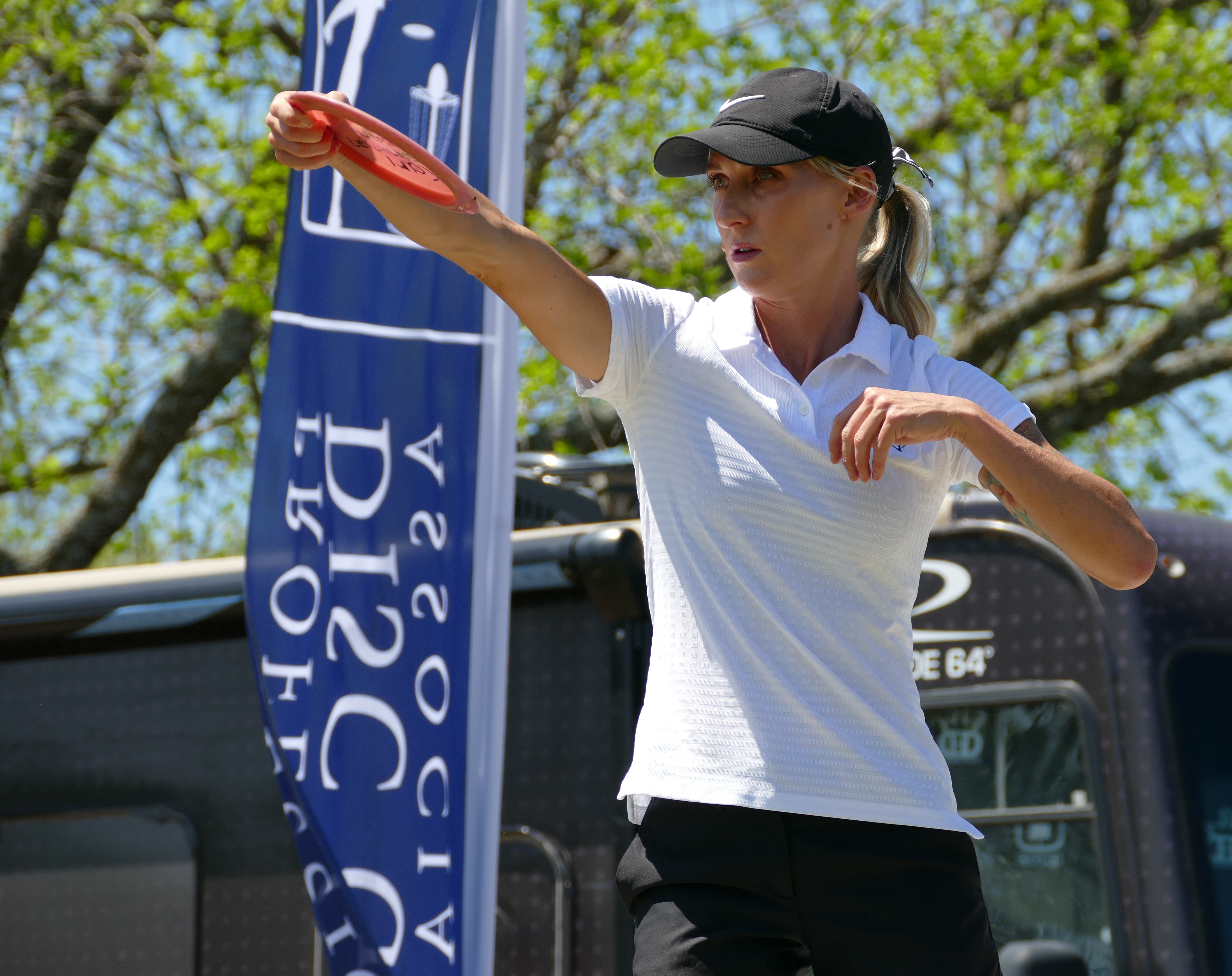 After entering the round with a one-shot lead over Allen, that slim margin disappeared with a two-stroke swing on hole 5 when Allen grabbed a birdie and King two-putted for bogey.

Once again in Kansas, the top of the leaderboard changed in the FPO division, but it wouldn't be the last time on Saturday.

From there, the duo, who had long separated themselves from the rest of the field, engaged in their match-play-style battle, going stroke for stroke with one another over the next four holes. Both carded bogies on six, birdies on seven, hit tester putts for pars on eight and grabbed fours on the par-5 ninth.

On the tricky 399-foot 11th, the door opened after Allen found the out-of-bounds. King responded with a big drive and a tap-in par.

After ripping a huge drive into the headwind on 14, King was feeling it and showed her first bit of emotion with a small fist pump while walking back to her bag. Allen’s upshot sailed OB and, again, King attacked with her upshot for par.

The top of leaderboard changed, and for the last time.

King finished with a 15-under par total for the four-round event and led in Circle 1 in regulation, Circle 2 in regulation and scramble. Allen finished at 9-under. 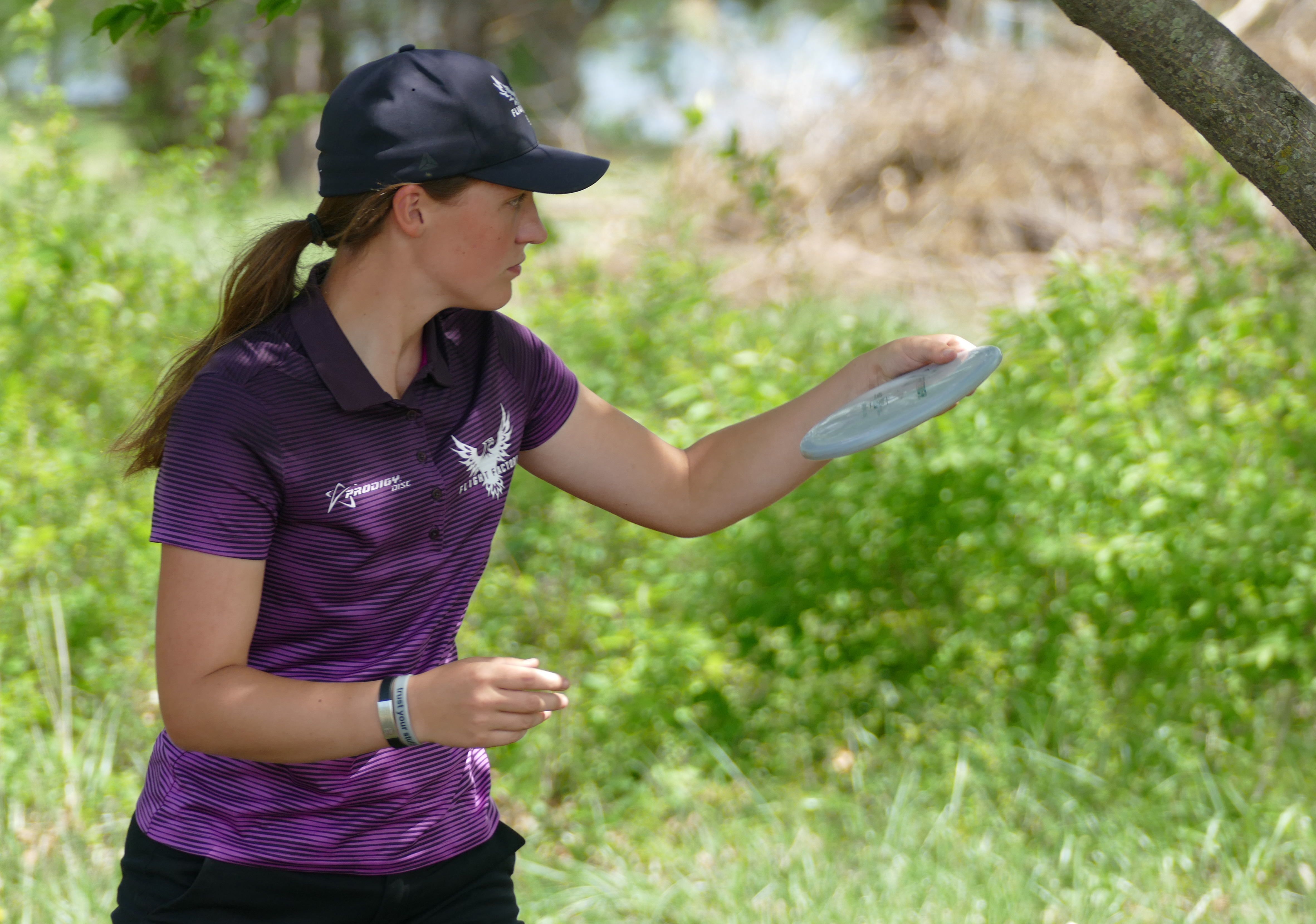 Heather Young was dominant on the putting green for a podium finish at the DDO. Photo: Hayden Henry / PDGA

Heather Young turned in the hot round of the day on Sunday with a 4-under 63, unofficially rated 993, to jump into a tie with Macie Walker for a podium finish.

For Walker, the tie for third capped a breakout run on the Elite Series. The Tennessee native finished fourth at the Disc Golf Pro Tour – Jonesboro Open in April.

King will look to make it a three-peat while the rest of the ever-growing competition in FPO will look for their first NT title of 2021 at the Santa Cruz Masters Cup on May 28-30, a week after the first PDGA Major of the season, the United States Women's Disc Golf Championship on May 21-23.