McBeth and Pierce Add Another National Tour Win to Their Resumes

McBeth and Pierce Add Another National Tour Win to Their Resumes

After three days of seemingly nonstop activity, the 2015 Dynamic Discs Glass Blown Open has finally come to end. The weather finally took a turn today, not so much for the worse, but for the usual. For the first time this week it was actually windy. Drives, approaches, and upshots were plagued by air-bounces and unpredictable flight paths. At a course like Emporia Country Club, this is actually a good thing, as it forces all the players into a situation where only the best will survive.

Only one division had a player that didn’t start the day in the lead, coming from behind to emerge as the winner. That division was Open Masters, and the player to take home the title was San Francisco’s own, Patrick Brown #25713. He started the final round one throw behind Ken Climo #4297, but that wouldn’t last long.

After seven holes he had already moved ahead of Climo on the leaderboard. He then gained two throws on Climo on both Hole 12 and Hole 13, giving him a five throw cushion with only five holes to go. He’d end the day by being the only player to card a birdie on the infamous island Hole 18, allowing him to take home the title by a margin of five. While standing on the Hole 18's tee, he said "Why not go for it?", knowing even if he ended up in the water he'd be throing for three from the drop zone for an all but guaranteed bogey. It paid off, as his drive came to rest safely on the island allowing him to tap in for an exciting birdie to finish the tournament.

Ken Shepperd #4980, in the same situation as Climo, started the day in the lead by one in the Open Grandmasters division. Shepperd however would hold his lead and eventually widen it, shooting the hot round in the division of 62 (even par), unofficially rated at 999. He headed into the clubhouse with a well-deserved smile, winning by three strokes or more over the rest of the Open Grandmasters division.

Here’s a story you may have heard before. Paige Pierce #29190 teed off on the lead card a few throws ahead of the competition, and walked away with yet another PDGA National Tour title. And she didn’t just win, she won by a landslide, turning in a final score for the day of 61. Even with a handful of penalties on the last few holes, Pierce still won by 11 throws.

Catrina Allen #44184 held her position in second place the entire round, but without ever gaining any ground on Pierce. On the 18th hole, one too many penalties strokes allowed for Jennifer Allen to gain two throws on her, forcing them into a tie for 2nd place overall. Val Jenkins #17495 threw the hot round of 60, unofficially rated at 1014, moving up from the chase card to end the day in 4th place overall.. 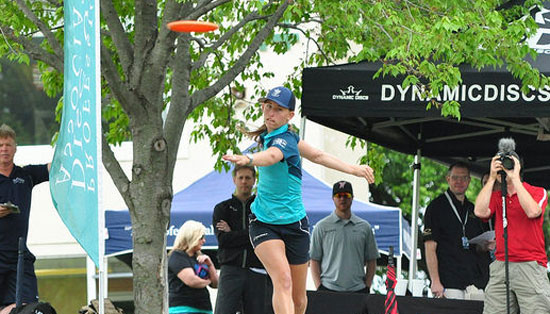 Speaking of stories you might have heard before. Ever heard of Paul McBeth #27523? Yeah, we know you have. If there were some sort of dramatic story to tell about his victory today at Emporia Country Club, we’d be the first to tell you. McBeth was joined on the lead card this afternoon by Eagle McMahon #37817, Dave Feldberg #12626, and Will Schusterick #29064.

Feldberg was the only one to make a legitimate run at McBeth’s lead, bringing it to within one on several occasions. Despite his best efforts, Feldberg never did take the lead away from McBeth, nor did he even tie it up. Nikko Locastro #11534 and Paul Ulibarri #27171 took advantage of the misfortunate rounds that McMahon and Schusterick were having, throwing their way from the chase card to finish in 3rd and 4th, respectively.

If that wasn’t enough, there were also multiple other camera crews here this week filming the lead cards of the MPO and FPO divisions. Combine that with live scoring and tweeting on PDGALIVE.com, wrap-up shows by DynamicDiscs.TV and SmashBoxxTV, and an ace by Billy Engel #44458 during Round 2 that was seen by millions on Sportscenter’s Top Ten Plays, high-resolution photos on the PDGA Flickr page, and it’s easy to say that the media coverage of the 2015 GBO was an interesting story in and of itself.

There are so many people to thank for the success of this PDGA National Tour event. The crew and staff of Dynamic Discs did a truly incredible job of running the show. SmashBoxxTV and DynamicDiscs.TV did a great job of providing live streaming coverage. Jomez Productions and Prodigy Disc brought in some of the best post-production videos of disc golf YouTube has ever seen. The list goes on and on...

We hope you enjoyed the 2015 Dynamic Discs Glass Blown Open. Congratulations to all of the division winners on both the Pro and Am side. We look forward to coming back to Emporia next year!

Big tournaments all over this weekend. I Just finished a big one today. This sport will only grow from Here. Proud to be part of it!