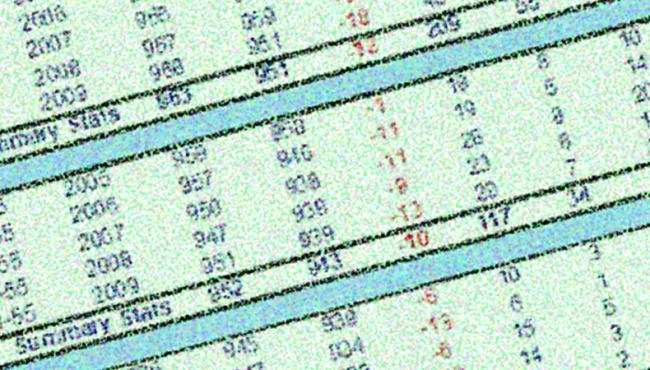 In addition to trying to win events, many players are also trying to increase their Player Rating. However, once you pass a certain age, it can become a struggle to improve your rating or just hang on to the one you have despite your best efforts. So, when is that certain age (if you don't already know) when the march of time starts messing with your game, barring sickness or injury? The answers to these mysteries and more will unfold in the following analysis of player ratings gathered since 2002.

If you were born after 1979, none of your stats are used for this analysis. However, these results could be your "road more traveled" as you continue to compete in your favorite sport. Those of you who were pro propagators, current PDGA members for any 9-year stretch between 2002 and 2014, and born before 1980, your stats were likely used in this analysis. Only stats for members who had been pros for at least four years, before we looked at their rating changes for their next five years of competition, were used. The assumption is that the ratings of pros who were competitively active for at least four years had stabilized or were close to leveling out before analyzing their ratings for the next five years.

Of course, most of these "stabilized" pros were still trying to improve. But, the one constant in this analysis is that every pro in each age group has aged by five years. We take a snapshot of their rating before and after the five years have elapsed and see what the numbers show. Only ratings from 2006 to 2014 were used. The ratings calculation process went through a small transition during 2005, so no ratings data older than the end of 2005 was used outside of determining whether or not a player was a pro at the time.

Let's jump right in with the summary graphs showing the overall results for men. 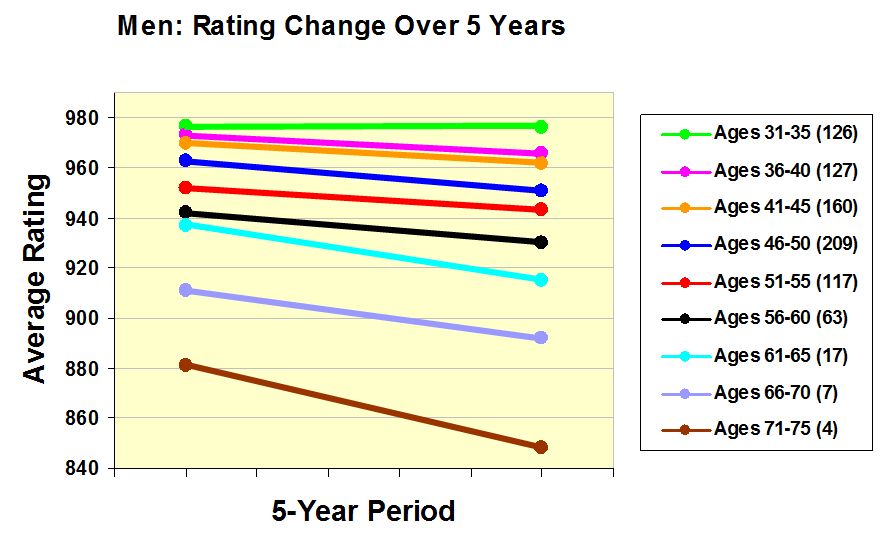 The graph shows the starting and ending average ratings for each group of pros for 5-year periods from ages 31-35 all the way to 71-75 for men. The number of players for each starting age is shown in parentheses. The graphs only include age ranges where we had data on at least four pros. Even though some of those groups are small, they do include every pro who qualified. The full PDGA data set has been included for each 5-year period; this is not a random sample of data.

The graph lines for men confirm what many might expect; ratings eventually decline with age. It appears the 5-year period from 36-40 is where the decline starts. For the age 31-35 group, ratings hold steady for men.

No amateurs, in terms of PDGA member status, were included in this study. In theory, the pros analyzed were the best players in their age group striving to win and improve their rating if possible during the 5-year period being reviewed. It doesn't mean some amateurs in the same age range might not be able to play as well or even improve during a 5-year period. But, the groups of pros analyzed likely present the best high-water benchmark for what players of a similar age could expect currently, or for that matter, any active player when they get to those age ranges.

Unfortunately, we found few women who met the selection criteria for each 5-year period. Here are the graph lines for five groups of women between the ages of 31-55 ranging between five and nine players per age group (shown in parentheses). 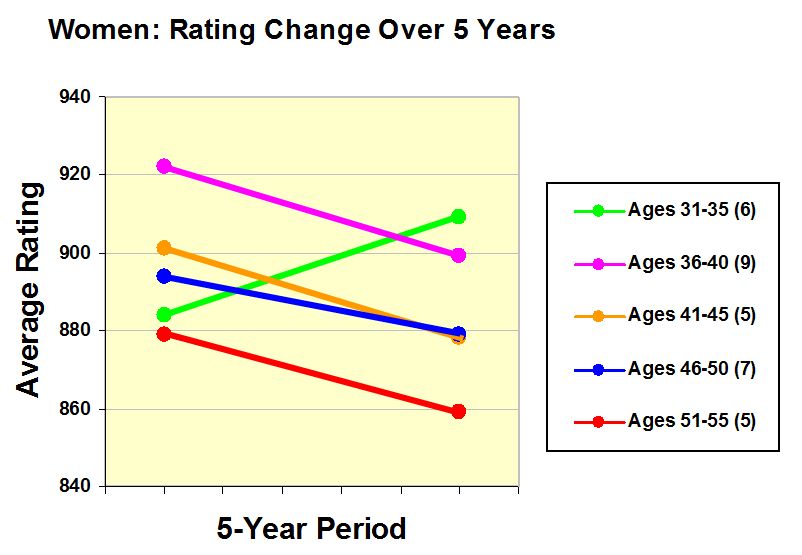 Ratings for women actually increased from age 31-35, unlike the men who remained stable. It's hard to glean much from just six players, but perhaps women in that age range turned pro later in their 20s than the men and were still on a faster learning curve. From ages 36 through 55, women's ratings dropped about twice as fast as the men every five years.

The results support the start of our Masters division around age 40, as it's been since the qualifying age was moved up from 35 in the year 2000. For men in their 40s and 50s, there's about a 20-point drop per decade. The data is very thin for over 70 year old men, but likely indicates the move to 5-year division breaks for Legends was a good call. The numbers for the 66-70 range indicate breaking the 60s into 5-year divisions could also be warranted (Super Senior Grandmasters?).

When this aging study was done in 2005 with limited data from the first seven years of ratings, there was no indication of a drop off in ratings from ages 36-40 among men. This time, there was a slight drop-off in four of the five years. Mere speculation, but it’s possible that a variety of factors such as newer disc technology, longer courses, better training, and perhaps more athletic 20+ year olds during this time period, along with open pros in their 30s not being able to dedicate as much time to their sport has not so much lead to their decline as the young men have raised the bar a bit by "stealing" rating points from older open players.

The tables below show the stats that produced the Summary values for the graphs above. There's not much more to say other than average performance stats do not have to be your destiny, just a reference to measure your efforts against as you continue to play disc golf. Until men got to the 66-70 age bracket, at least some men in the study improved their ratings up to 50 points over their 5-year period. The road was a bit tougher for the women, but at least one increased her rating in each of the age ranges up to age of 60.

More information about ratings, SSA, Points Systems, and more can be found on the PDGA Player & Course Rating System as well as the Ratings FAQ page. 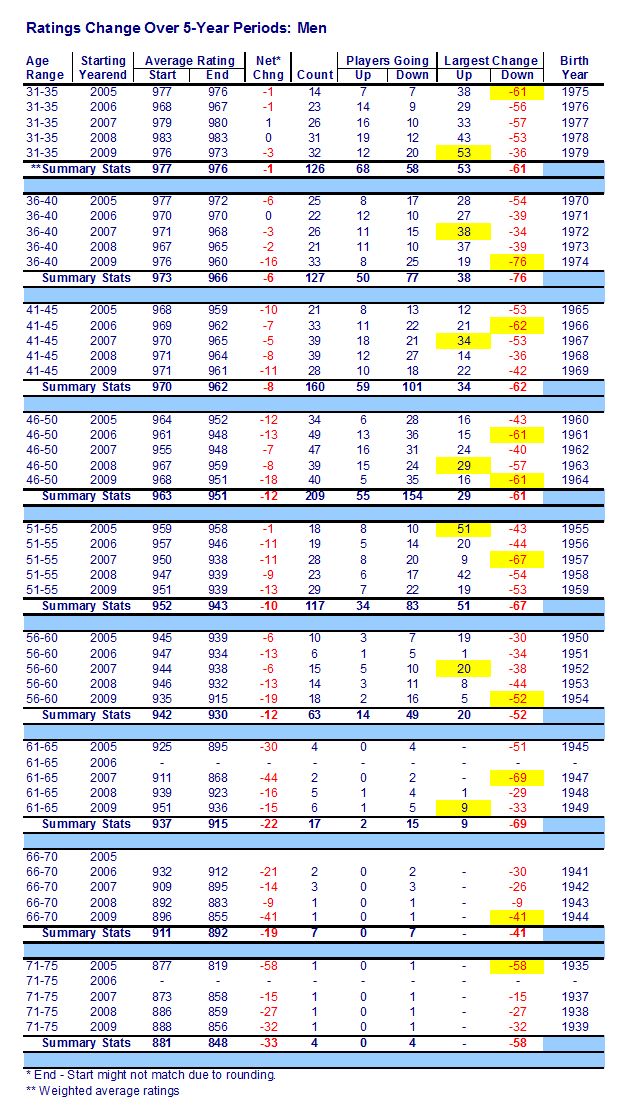 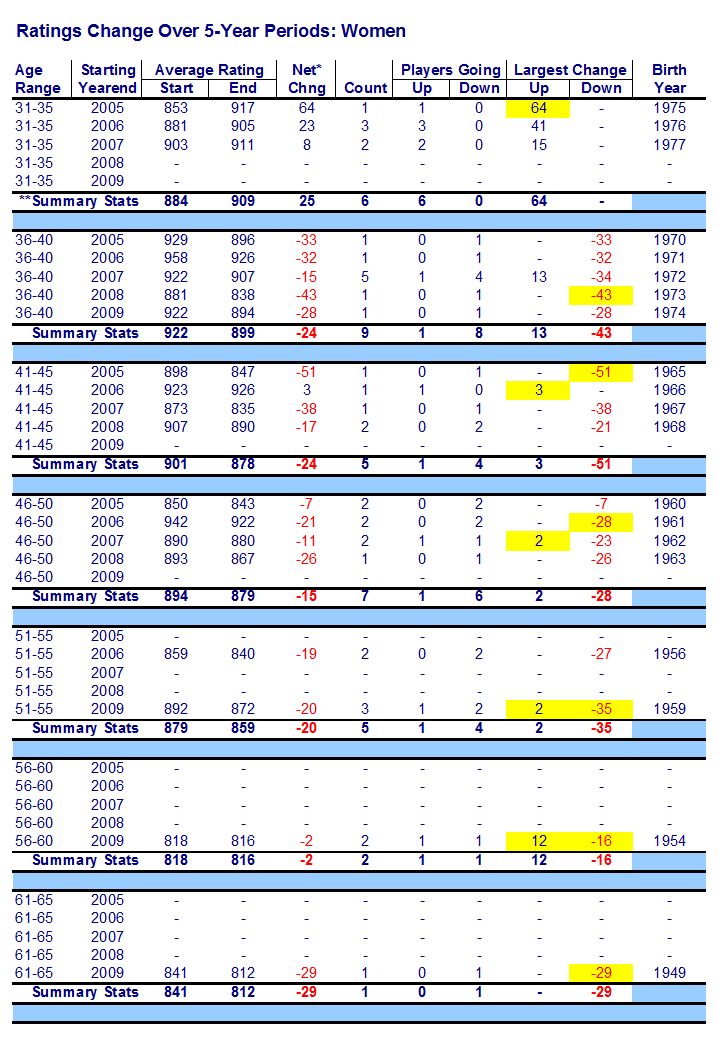 My rating seems to fluctuate up and down each year by a few strokes like a yoyo. Would these stats be the reason why the Pro Senior Legends only get to play 4 rounds of tournament play in the past year and this year. We pay the same entry fee as all the other divisions yet we only play one round a day for four days. Yet the Pro Legends, and the Pro Senior G/M women 2 rounds on Friday the same course totaling 5 rounds of play?