The Cat's Out Of The Bag

The Cat's Out Of The Bag 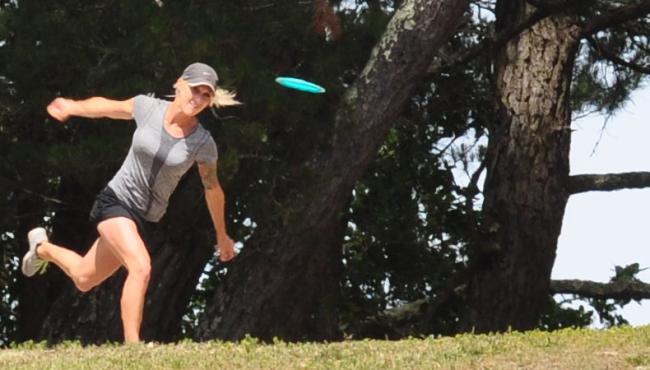 In the ball golf and disc golf world, Saturday is often referred to as “moving day”. In any Friday-Saturday-Sunday event, the way you play on Saturday often plays the biggest role in determining, to at least some degree, where you will end up overall at the end of the day on Sunday. Whether you play well and move up the ranks, or play terribly and move down, it will likely impact the way you carry yourself for the final round(s) both mentally and physically.

At the 2014 “Steady” Ed Memorial Masters Cup, played on the cruel but beautiful DeLaveaga Disc Golf Course in Santa Cruz, “moving day” proved to be more than just an idea in the Open division. A prime example of this would be Simon Lizotte #8332, who shot the best round of the entire event thus far, finishing the day at 11 under par, unofficially rated at 1079. He went into round two this morning knowing that 26 of the 72 players in his division outplayed him the day before, and still managed to move all the way up to third place, which he now shares with Ricky Wysocki #38008.

As exciting as it was to hear about the scores coming in from the Open division, it doesn’t really hold a candle to what was going on in the Open Women’s division. At the start of the round, Catrina Allen #44184 and Val Jenkins #17495 were tied for the lead, with Paige Pierce #29190 just three strokes behind in third. Paige and Val are both more than capable of playing lights out and opening up a lead against Catrina, but it certainly didn’t happen today. In fact, it didn’t even come close to happening.

Catrina slowly but surely took control of the round, gaining strokes on the rest of the field whenever the opportunity to do so presented itself. After the first eight holes of the course were completed, she had already put herself three strokes ahead of Val and six ahead of Paige. And it didn’t stop there.

Catrina continued to steamroll the competition, both women and men, which we'll get to later. After 18 of the 24 holes on one of the fiercest courses in the country were completed, Catrina was still bogey free. She even managed to save par on hole 13, nicknamed the “I-5” by locals and considered by many to play as a par four, after leaving herself with what appeared to be no options for an approach. An insane spike hyzer and 40 foot putt later, she proved what appeared to be impossible, possible.

The icing on the cake was on the final hole, the "Top of the World”, where Catrina crushed a midrange from the tee pad. It was one of the greatest drives these eyes have ever seen on any hole at any course. It slammed into the ground a few feet outside of the circle, took a gentle skip, and settled 15 feet from the basket. After hitting the birdie putt, her final score would be three under par, unofficially rated at an astonishing 1025. Out of the 162 professional disc golfers in this event, only 15 (all of which were men) would shoot a better round. Seven of those 15 only beat her by a single stroke, and I highly doubt all seven of them took a par on the I-5 and a parked a drive with a midrange from the Top of the World.

Not to be overlooked, Val also parked the final hole with a flat hyzer, as you'll see in the video below. She was only 20 feet out and nailed the putt.

Tune in tomorrow for the final round of the 2014 “Steady” Ed Memorial Masters Cup. DeLaveaga is the type of place where it doesn’t matter how big of a lead you have. It’s always anyone’s event to win, or lose. We’ll have live coverage once again on PDGALive.com for the final rounds tomorrow and if you’re looking for high-resolution pictures from the first two rounds, check out the PDGA Flickr page.