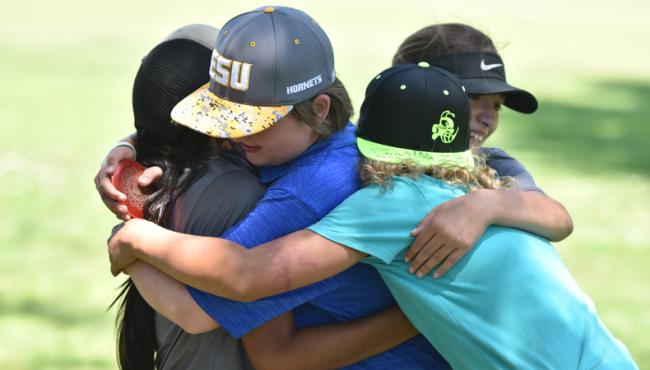 After three and a half days of battling in the blazing summer heat of Emporia, Kansas, nine champions were crowned at the 2019 PDGA Junior Disc Golf World Championships presented by Dynamic Discs. By the time the preliminary rounds had come to an end, a clear leader had emerged in each and every division, leaving very little question as to who was likely to emerge as the world champion when the 9-hole finals at Emporia Country Club were all said and done.

The finals produced far more showdowns for the second, third, and fourth place positions than anything else, as a majority of the divisions had a competitor at the top of the leaderboard so far ahead of the field that the finals were essentially just an unfettered march to victory.

Zach Arlinghaus tapping in for what will likely be his last round as an amateur to become the MJ18 world champion.

In the largest divisions, Junior 18 & Under (MJ18) and Junior 15 & Under (MJ15), Zach Arlinghaus and Gannon Buhr, respectively, had amassed leads that were simply uncatchable. Despite shooting the third best score in his group during the final nine, Arlinghaus still went on to win by 15 strokes or more for his second world title as a junior ahead of Kevin Kiefer, Harper Thompson, and Elijah Bickel, who finished second, third, and fourth, respectively. Buhr did much of the same, except with even more of a cushion than Arlinghaus. As the highest-rated player in the entire event at 986, it’s no surprise that the recently-turned 14-year-old Buh crushed the competition to emerge as the champion by a whopping 27 strokes.

Gannon Buhr finishing off a week of domination in the MJ15 division.

The eldest of three Castruita sisters competing at this year’s Junior Worlds was Melody Castruita, who took the lead position away from Kat Mertsch after a lights-out second round on the opening day and never looked back. Maintaining the lead throughout the rest of the week, Castruita teed off for her final nine with a lead of six and added two more to her lead to finish eight ahead of Mertsch for her first world title as a junior. 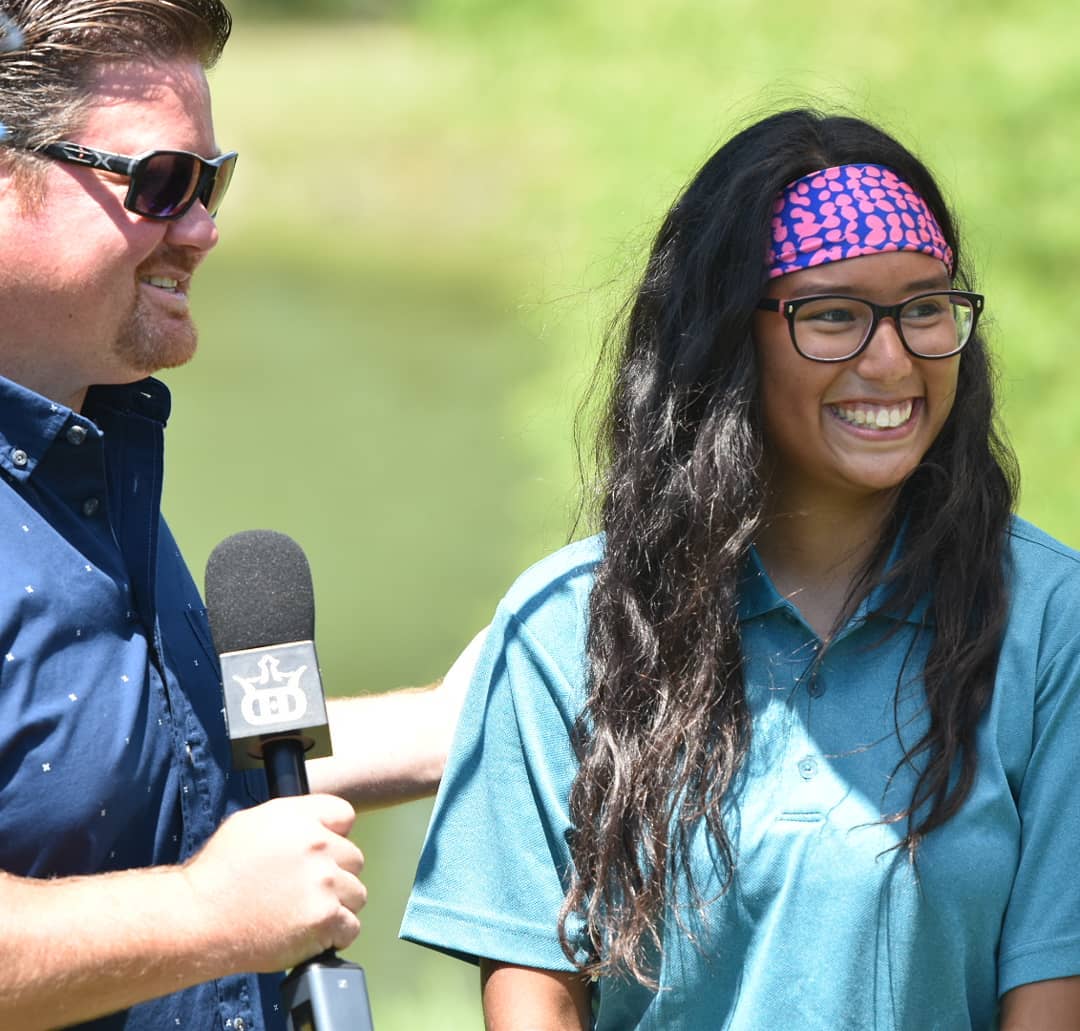 An emotional Melody Castruita after taking home the FJ18 world title, the second of the day for the Castruita family. Photo: Matt Gregoire, PDGA

The largest margin of victory belongs to Hope Brown of the Junior Girls 15 &Under division (FJ15). After shooting the best score during five of her six preliminary rounds, Brown went into the finals with a ridiculous lead of 29. With such a large gap between herself and the second place finisher, Aria Castruita, there was no reason to play conservative during the finals, and she didn’t. Brown’s score of 31 for the finals added six more to her margin of victory, earning her third world title by 35 strokes.

Hope Brown tapping in for the win after a landslide victory in the FJ15 division.

The Junior 12 & Under (MJ12) division saw a close battle throughout the week between Kolby Sanchez and several of his varying cardmates, but he never allowed anyone to take over the lead position from day one. His opening round that was four better than anyone else in the division gave him the cushion he needed to remain at the top of the leaderboard, and he continued to add to it as the week went on. When their final round began, Sanchez led by eight and then shot the hot round to grab his second world title as a junior with a total score that was 12 better than second place finisher Carter Ahrens.

While her older sisters were on the course working their way through the final nine loop, 11-year-old Haley Castruita was heading into the last few holes competing in what would turn out to be the tightest race to the finish in the Junior Girls 12 & Under (FJ12) division. Castruita snagged an early lead of seven after the opening round and would fend off MaryJane Stevens for the rest of the week. It wouldn’t be easy though, as Stevens chipped away at Castruita’s lead in both the second and third rounds, bringing the gap to just two strokes with two preliminary rounds still remaining. Castruita played strong as the week came to an end, shooting the hot score for round five to bring her lead back to four and then tying Stevens for their sixth and final preliminary round on Saturday morning. Stevens gave it her all and shot one better than Castruita in the finals, but it wasn’t enough to stop Castruita from becoming one of two Castruita world champions in the end. 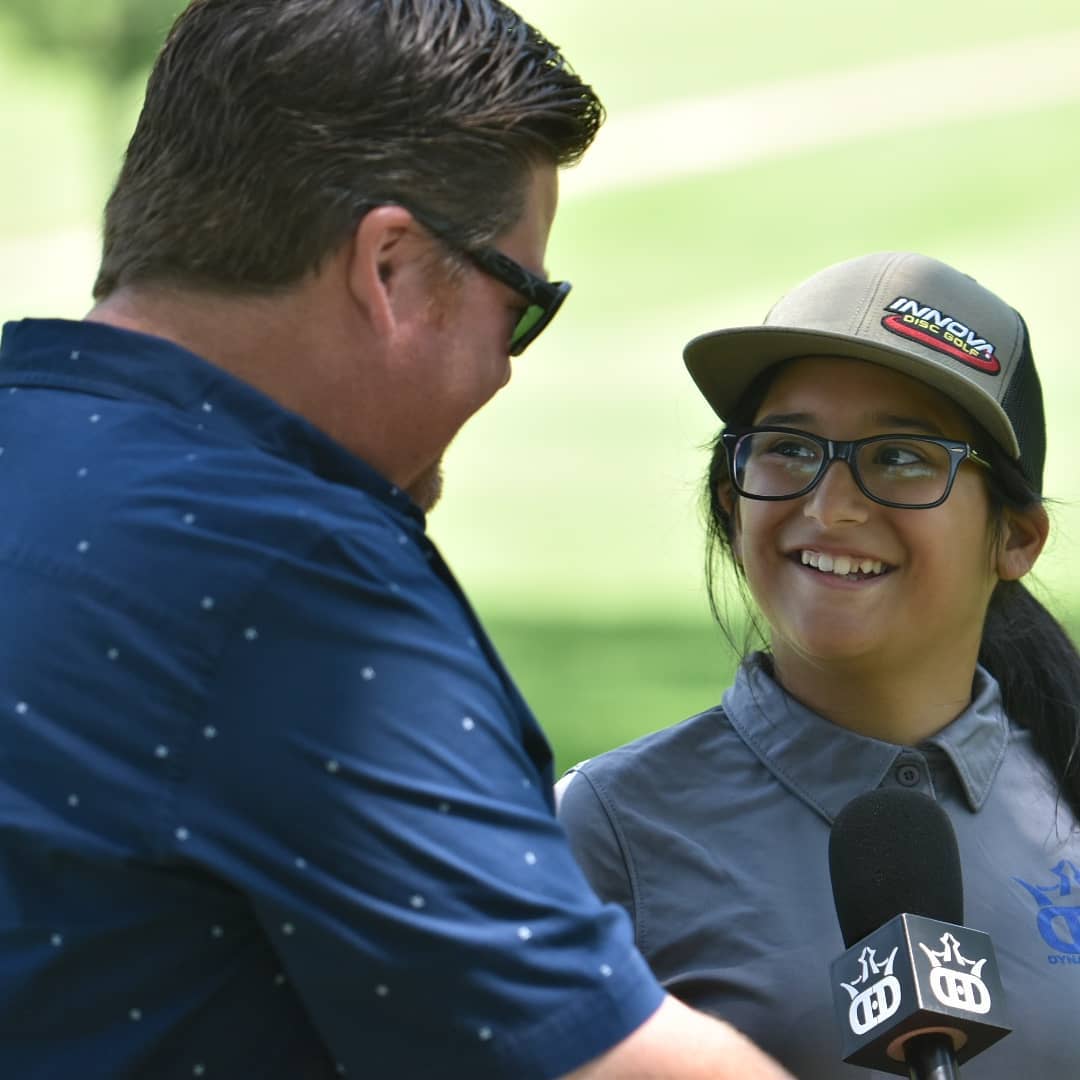 A very happy Haley Castruita after her win in the FJ12 division. Photo: Matt Gregoire, PDGA

Having already won world titles in the Junior 8 & Under (MJ8) division in 2017 and the Junior 10 & Under division in 2018, it was time for Wyatt Mahoney to go for a third title, in a third division, the Junior 10 & Under division. At just nine years old, his victory at the 2019 Junior World Championships is an incredibly impressive feat. Not only did he earn a world title for the third year in a row, but he did so with ease, finishing seven ahead of Uriyah Kelley. 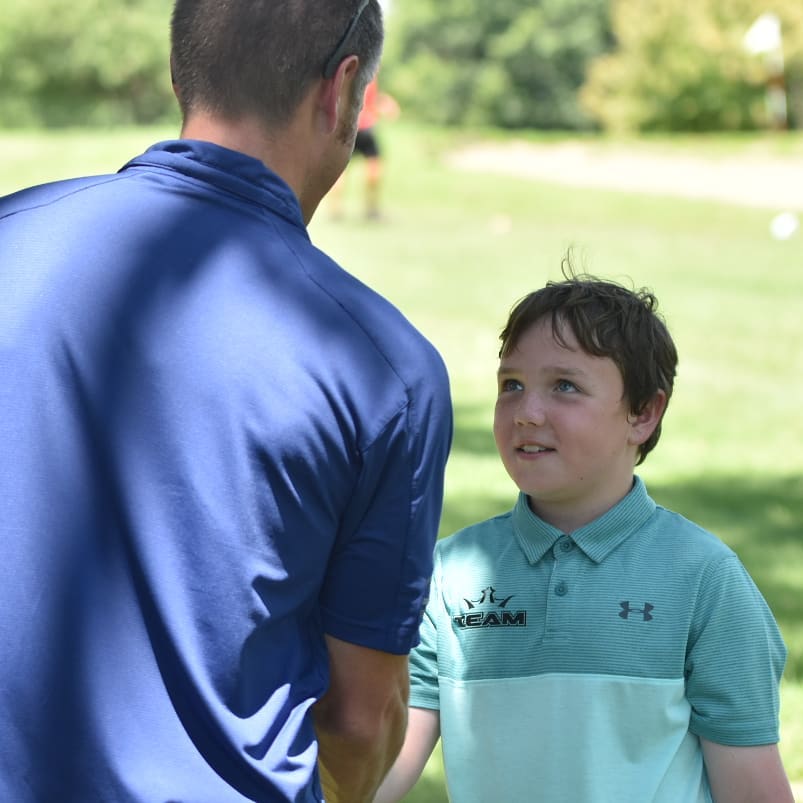 Last but certainly not least, and first to tee off for their finals on Saturday, were the top two competitors from the Junior Girls 10 & Under (FJ10) division and the Junior 8 & Under division playing together as a foursome. 10-year-old Zoey Lynn Martinez had little to worry about on her march to victory having already amassed a substantial lead heading into the finals, joined by nine-year-old Olivia Scott, who played her way to a sudden-death playoff against Lily Schultz on Saturday morning for her spot in the finals.

The 2017 Junior 6 & Under world champion, Kaidin Bell, after finishing in seventh place at the 2018 Junior World Championships in the Junior 8 & Under division, was on a mission to take down the title in 2019. Mission accomplished. At just seven years old, Bell earned his second world title with a wire-to-wire victory, taking the lead after the first round and holding onto it until the very end. It was the second closest battle of the tournament, as he and Jackson Green duked it out during the finals. An OB penalty on the second to last hole made it a bit more interesting, but it wasn’t enough to stop Bell from taking home the title, four ahead of Green.

Live coverage from the last four holes of the MJ8 and FJ10 finals.

Thank you to the City of Emporia, Dynamic Discs, and the dozens of staff and volunteers that helped make the 2019 PDGA Junior Disc Golf World Championships one of the most fun events to be a part of for all parties involved. The PDGA Junior World Championships will return to Emporia once again in 2020, so start making plans for next summer!