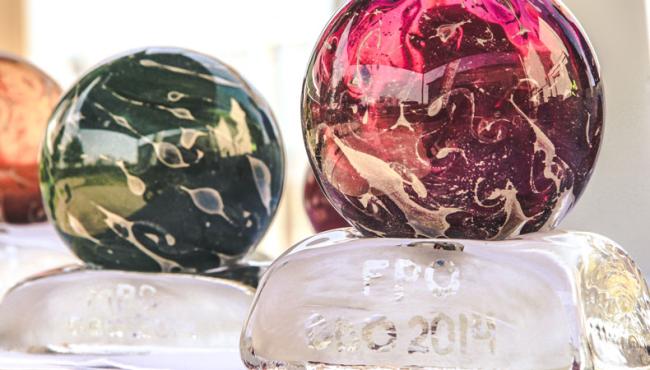 Story and images provided by Dynamic Discs in collaboration with the PDGA.

Some might think that registering five months early for a disc golf tournament is going a little bit overboard, but for the 306 that are already signed up for the 2015 Glass Blown Open (GBO) as of Monday November 17th, it makes perfect sense. The GBO, now heading into its 13th year, has already made a name for itself as one of the most fun and best run events in the country but 2015 marks a new milestone for the GBO. It has been selected to be one of the seven PDGA National Tour events for next season, meaning we can only expect it to be bigger and better than it has ever been before.

In 2003, Eric McCabe #11674 (2010 PDGA World Champion) and best friend Gabe Werly #17552 brought together 88 players for a B-Tier in the town of Emporia, Kansas, and called the event the The Glass Blown Open. It has since has grown from those humble beginnings into an event that draws people from all over the United States and from many other countries around the world.

In 2014, 512 competitors ascended upon Emporia to compete on top-rated courses and the bar is being raised much higher for the National Tour event in 2015. Dynamic Discs is setting a goal of 900 registered competitors. Hitting this goal would make the 2015 GBO one of the largest disc golf tournaments in the world and if there’s any group of people that can pull off such a feat, it’s the Dynamic Discs crew. With the support of an entire town behind them, they’ve proven year after year that whatever they put their minds to is possible.

“The city of Emporia really comes together to help get the courses ready, check players in, and to make sure that everyone has a good time”, says McCabe. And that might be somewhat of an understatement.

For those of you that don’t know me, my name is Matt Gregoire #28647 and I’m the Media Manager for the PDGA. As someone who went to every National Tour event and almost every PDGA Major in 2014, I can personally tell you that being at the Glass Blow Open this year was one of the most unique disc golf experiences I’ve ever been a part of.

The entire town was truly taken over by disc golfers and the warm welcome we received was like no other place I’d been before. For example, Main Street was closed off in the town center, on a Saturday night, for the sole purpose of a block party for disc golfers. “Only in Emporia”, became my phrase of the weekend.

Activities that are already scheduled for the 2015 Glass Blown Open include:

Registration for the event opened on November 3rd and within the first 48 hours had 186 players signed up which makes the goal of 900 players well within reach. To learn more about this event go to the official 2015 Glass Blown Open website or shoot an email to the tournament director (also the head of Dynamic Discs), Jeremy Ruscoe #29631.