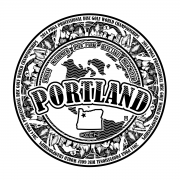 Portland, Oregon is proud to be the host for the 2014 PDGA Disc Golf World Championship. On behalf of all the disc golfers from the Portland metro area and throughout the Northwest, we look forward to having the opportunity to show you what our region has to offer during the week of August 9th – August 16th.

Our Local Organizing Committee is made up of five individuals with over 50 years of tournament directing experience. Two of our members were past office holders on the PDGA Board of Directors, four are past or current Beaver State Fling Tournament Directors and all have been Tournament Directors of many other quality events.  We are honored to be bringing the World’s best to Portland, Oregon to determine the 2014 Professional Disc Golf World Champions as well as showcasing all the amazing activities and venues Portland has to offer in August.

My name is Todd Andrews #13590, this year’s Tournament Director. I am a past President of the PDGA Board of Directors and the past President of Northwest Disc Golf Promotions that ran the Oregon Series. I was also on the core committee that ran the first Beaver State Fling up through its establishment as a NT Series event. I have been playing disc golf since 1980 and running tournaments since 1998.

Jeff Mittl #25015 is the current Tournament director of the Beaver State Fling and has been involved in the event since 2009. He is also on the board of directors of Stumptown Disc Golf and is the liaison to Milo McIver State Park Disc Golf Course. Jeff performs all levels of maintenance in the park and has a team of dedicated golfers who work hard to make this park a real gem. Jeff Mittl was awarded the PDGA’s Tournament Director of the year in 2010 for his part in shaping and developing the Beaver State Fling.

Jeff Hagerty #24724 was a co-founder of Stumptown Disc Golf in 2007 and became the President of Stumptown Disc Golf from 2011-2013.  He is the current Co-Tournament Director of the Beaver State Fling and has been involved in the Beaver State Fling since 2011.  With the help of many local volunteers, Jeff helped coordinate the installation of the Blue Lake Park, one of the courses we are playing this year.  Jeff also runs the Oregon Disc Golf Championships in early September and the Stumptown SLOSH Series during the winter in Portland.

Cris Bellinger #18301 was previously on the PDGA board of Director, and one of the founders of the Famed Oregon Series. Cris helped put Oregon Disc Golf on the national radar and provided great examples of well-run tournaments all across Oregon. He was the tournament director of the Beaver State Fling from 2002 – 2008. He has a strong background in the promotion and development of disc golf and has supported many of the disc golf clubs throughout Oregon.

Michael Phillips #25296 has been involved with disc golf since his first exposure in Corvallis, Oregon thanks in part to the Willamette Disc Golf Club. He has helped install several courses in Oregon and led a team of golfer in the design of Stub Stewart State Park Disc Golf Course. He was a co-founder of Stumptown Disc Golf in 2007 and the treasurer of the club from 2011-2013. He learned the ropes of disc golf promotion and directing from the Oregon Series and assisted with various tasks within the Oregon Series. He also shared the PDGA’s Tournament Director of the year Award in 2010 with Jeff Mittl.

Portland has an array of disc golf parks around the area and we have grabbed 5 of the best courses to help determine this year’s champions. If you have played in a Beaver State Fling you will be familiar with Milo McIver East and West. If you played in the 2013 Women’s USDGC you are familiar with Pier Park and Blue Lake Park. The two additional courses that we will be using are Trojan Disc Golf Park home of the Oregon Disc Golf Championships and the newest addition to the area, McCormick Disc Golf Course.

Our host hotel is the Monarch Hotel and Conference Center located in Clackamas, on SE 93rd Ave just south of Sunnyside Road. The Host Hotel is located near many food and shopping options and can be reached by Light Rail from the Portland International Airport. Just hop on the Red line to Gateway station and then get on the Green line to Clackamas Town Center, transit time is around 40 minutes and the cost is $2.50 for Adults. A short walk or ride from the host hotel shuttle will put you on the front steps of the hotel.

Other than our great courses, what else is it about Portland that should entice you to come here?

Known affectionately by many names; The City of Roses; Bridgetown; Stumptown; Beervana or simply, PDX, whatever you like to call it, Portland, Oregon is a unique and interesting metropolis. Geographically it is bisected by the beautiful Willamette River just upstream from where it joins the mighty Columbia and is located less than 1 1/2 hours from the mountains or the coast. The majesty of Mt. Hood and other volcanoes of the Cascade Range are visible from many points within and around the city.

Portland has a very mild climate, and the average temperature in August is 80 degrees with very low humidity. Portland offers first-rate accommodations, a model mass transit system, and an international airport rated #1 in the country. With no sales tax in Oregon and an atmosphere of foremost hospitality that extends from first-class hotels, restaurants and shopping to permeate the entire Portland culture, the “Rose City” offers an event experience unlike any other.

The Portland experience for disc golfers and their families is unmatched, the short blocks that make it the nation’s most walk able city and light rail and streetcar lines that run throughout downtown Portland and into the suburbs make it very easy to get around. The nation’s largest wilderness park within city limits is located in Portland.  Forest Park covers more than 5,000 acres.  Portland is also home to the world’s smallest park, Mill Ends Park, which is a two-foot-diameter circle. Also worth mentioning is Washington Park, just West of downtown, which is home to the Oregon Zoo, the Portland Japanese Garden and the International Rose Test Garden.

Apart from its natural beauty, there are many reasons to come visit. Portland was named by Money magazine as the most livable city in the country; Portland has also been referred to as one of the most environmentally friendly cities in the world. Popular Science has continued to award Portland the title of the Greenest City in America and Grist magazine lists it as the second greenest city in the world. As home to the headquarters of Nike, Adidas America, Columbia Sportswear and Keen Footwear, Portland has a preexisting base of sports and outdoor enthusiasts, an advantage that separates it as a sports event destination from other cities.

For those of you who are 21 years old, Portland is well known for its microbreweries and with more than 40 throughout the city it truly has a reason to boast that it's the beer capitol of the world. Portland is also located at the Northern end of the Willamette Valley, home to one of the best wine growing regions in the United States. Less than an hour away, it takes very little time to get away from the city and experience the bucolic setting and enjoy world class wines and restaurants. Additionally, Portland is home to a growing small batch distillery scene as well. Oregon boasts over a dozen distilleries, with at least eight in Portland. The city even has its own “distillery row”, a small area of Southeast Portland near downtown. So much to enjoy it seems, but so little time.

Lastly, we would like to give a very big thank you to our generous sponsors. Please utilize their goods and services when at all possible. They are having a tremendous impact on this tournament so please support them.