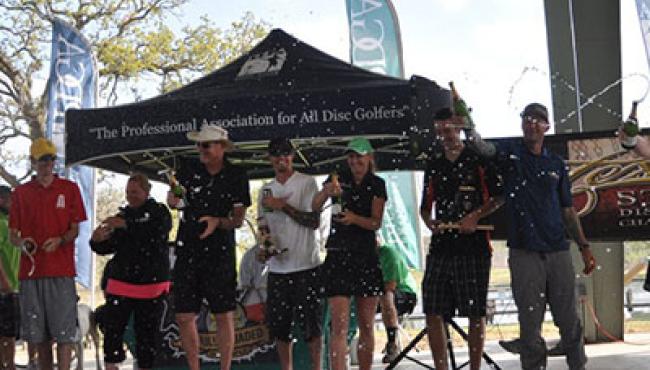 There's something different about the final day of a big disc golf tournament. Obviously there's the fact that the winners will be crowned, but there's something else in the air that's difficult, maybe even impossible, to truly explain to someone who hasn't been there all week. Everyone has a different attitude and demeanor. The players who are behind know they have one last chance to gain some ground. The leaders know they have targets on their backs and have to deal with the stress of knowing everyone is after them. The event staff is exhausted and likely more excited for the tournament to be coming to an end than they are about who will win or lose. The parking lots are always jam-packed and impossible to navigate. The people that just happen to be in the park that don't know what disc golf is are confused, excited, and maybe even a little bit freaked out. It's truly a day of disc golf madness at any big tournament and most certainly at the 2013 Texas State Championships.

The leaderboards were set up and ready to go at 10:50am when the Women's lead card teed off. At the start of the round, Catrina Ulibarri sat one stroke back from Sarah Hokom, who could have had a nicer cushion had she not taken a triple bogey on the final hole the day before. Paige Pierce and Des Reading started the day in 3rd and 4th, respectively, and would finish the tournament that way as well. Each of the women had some rough holes during the round, but Sarah played smart and hit her lines all day to significantly pull away from Catrina. She would eventually win the tournament by a surprising 9 strokes.

Catrina seemed doomed from the get-go. She took a double bogey on hole 2, only to follow with another bogey on hole 3, and another double bogey on hole 4. She followed with back-to-back birdies but it wasn't going to be enough to catch Sarah. Frustration is a game killer in golf, and it only takes a few bad holes to lose sight of someone you're trying to beat. After the first 9 holes, Catrina went from 1 stroke behind the leader to 9. That's all there was to it. Pierce finished the day with a 7 over par and right behind her was Des Reading with a 9 over.

The lead card in the Men's division was destined to be a fun one to watch. 2012 World Champion Paul McBeth along with Nikko Locastro and Paul Ulibarri started the round tied for 2nd place at 10 under par for the weekend. Paul McBeth is the Tiger Woods of disc golf in the sense that he seems to always play his best rounds on the final day of the tournament when it matters the most. He finished 13 under par for the round, the 2nd best round of the entire tournament, and finished in 2nd place for the second time in two National Tour Elite Series events.

Locastro uncharacteristicaly missed a few putts from inside the circle early on in the round, but he got his head back in the game and finished strong. When it was all said and done he ended the tournament in 3rd place, finishing 7 strokes behind McBeth overall with a 1035 rated 6 under par. Ulibarri had an exciting start to the round, with a near-ace on hole 2 in front of the gallery. His disc hit off the top of the basket and left him with a 15' putt for what should have been an easy birdie. When he stepped up to putt, he had a momentary loss of focus caused by the flashing of several cameras in the gallery and he missed the putt by hitting off the rim of the cage. The gallery was quickly instructed to disbale the flash on their phones and cameras. He seemed off his game from that point on. By the end of the round he dropped from tied for 2nd place...to tied for 11th.

Ron Convers finished the tournament in 4th place after shooting a very impressive 9 under par on his final round, reminding the 20-something year old current stars of the sport that disc golf isn't just about having a huge arm. Convers consistently hit his lines and placed his drives accurately off the tee. Experience (and lights-out putting) can get you a lot farther, even at the NT level, than one might think.

Wysocki had no intention of letting anyone get within reach of his 12 stroke lead. McBeth did everything he could to catch him, but for every great drive or putt McBeth had, Wysocki had one too. He finished the round at 11 under par, which was the 3rd best round of the tournament. He throws putters off the tee when others throw midranges. He hits dead center on putts where others lay up. He is as good with his forehand as he is with his backhand, both on the tee and off. At 19 years old and only a few months in to his 2nd year as a touring pro, one has to wonder what this kid has in store for the disc golf world in the weeks, months, and years to come. When he is on his game, he is simply unstoppable.

The next stop on the National Tour Series presented by Vibram is the Steady Ed Masters Cup in Santa Cruz, CA at the infamous De Laveaga course. Congratulations to Ricky Wysocki, Sarah Hokom, and the winners of all the divisions for their victories this weekend in Austin. We hope to see all of them in Santa Cruz in 6 weeks!