The saying goes, “Everything is bigger in Texas”. For the Waterloo Disc Golf Club, this hold true for both disc golf and charitable contributions.

The 38th Annual Waterloo Disc Golf Classic’s donations total came to $9,400 and raised the total cash donation to the local charity to an amazingly jaw dropping $107,943.  This is in addition to many boxes of food, household goods, and toys for the families who use RMHC CTX, plus over 140 gallon-jugs full of aluminum can tabs over the past 17 years.

At 38 years old, this historic disc golf tournament is the oldest, longest running tournament in the Southwestern U.S. (one of the oldest in the world), and is held annually on the third weekend of October. This year’s event was held at Austin’s own historic Hancock Golf Course, the very first ball golf course in Austin, TX (opened in 1889).  Austin’s first disc golf event meets Austin’s first ball golf course, a perfect match.

Since 1998, the year of the 21st Annual Waterloo Disc Golf Classic, the tournament has supported families that rely on the Ronald McDonald House as a “home-away-from-home” while their children are in the hospital, helping the families as they cope with the physical and emotional stress of having critically ill or injured children. In addition to all the cash that is raised, the Waterloo Disc Golf Classic also collects in-kind donations including food, household items, toys, and thousands of aluminum pull tabs that are redeemed for cash (over 140 gallon-jugs full of aluminum can tabs have been donated so far).

Back in 1998, the tournament was going through a transition, having been run for many years by Disc Golf Hall of Fame member John Houck #1688 as well as the Houston Flying Disc Society.  A new Austin group was formed, the Texas Women’s Disc Golf League, to run the 21st Waterloo.  The group wanted to do more than just run a tournament; they wanted to make a difference in the community. 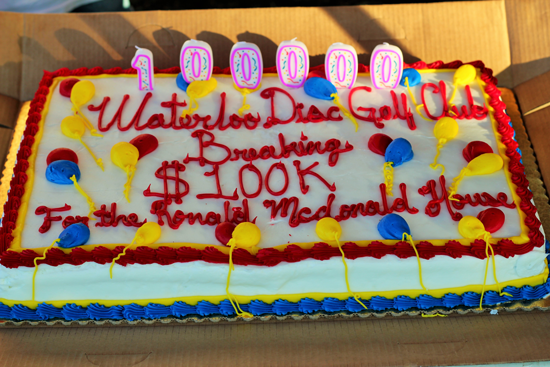 They decided to support a local charity that provided a great service.  They also wanted to work an organization small enough that the money raised by the disc golf club would be create a significant impact for the cause. RMHC CTX fit all the qualifications plus it had another aspect that no other charity had:, the actual Ronald McDonald House was located in one corner of Waterloo Park, the site of the tournament’s original location in downtown Austin.

RMHC CTX has since relocated to a bigger and better location near the new Dell Children’s Hospital.  After that successful first year, the founders of the Texas Women’s Disc Golf League got together and decided that Austin needed its own club to promote the sport and speak to the city and county on disc golf issues. And so, the Waterloo Disc Golf Club was born in 1999.

The 22nd Waterloo in 1999 was the club’s first big event, and RMHC CTX was retained as the charity.  The Waterloo Club continues to run the event to this day and still raises money and goods for Austin’s Ronald McDonald House.

During that first year in 1998 of supporting RMHC CTX, the tournament raised $1,754 and the amount has steadily increased since then, reaching $9,000 last year and a record $9,400 here in 2015. Waterloo Disc Golf Club’s total financial contribution since taking over the tournament stood at just under $100,000 after the 2014 tournament, so this year’s event was all about a huge celebration of crossing that $100,000 threshold.

The money raised each year comes from:

That passionate statement from Gordon set forth a mission mindset that the Waterloo Disc Golf Club took as a challenge, that it would not miss out on the opportunity to help the RMHC CTX in such a significant way.

“We are so grateful to the Waterloo Disc Golf Club for supporting the thousands of families who rely on our services while their children heal,” says Carolyn Schwarz, Chief Executive officer of RMHC CTX. “Their efforts to organize and host this event makes a big impact on how we care for our families – especially now since we have recently been 100 percent occupied with a waiting list. We are truly fortunate to be their charity partner". 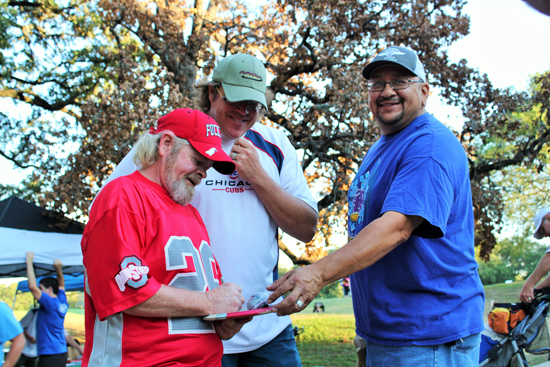 Seventeen years in the disc golf community can bring a lot of things. In that time, our sport has grown by leaps and bounds with players, technology, passion, and global presence, but nothing could have been expected to grow as big as the donations the Waterloo Disc Golf Club raised for the RMHC CTX.  To help surpass the amazing $100K milestone, players from around the Texas disc golf community and even some from other states came out once again in great numbers to support a great cause. The normal 9-hole Hancock Ball Golf Course was transformed into two custom 18-hole courses by local pros Joel Kelly and Mike Olse.

They were able to utilize all of the features that the course naturally provided, while also, including some of their own signature challenges. The course looked simple on paper, but once at eye level in the field of play it challenged many of the locals and well known pros like Bradley Williams #31644, Jay Reading, Des Reading #15863, Vinnie Miller #5521, and Joel Kelly #9152 during the three days of fun and competition.

Since the charity partnership began between the RMHC CTX and the Waterloo Disc Golf Classic, it is estimated that over 3,000 players have participated in the event.  While many of the players come back year after year (some have even played 30-35 Waterloo DG Classics), there are always some new players each year who join the “Waterloo family” in its annual cause for charity, and the Waterloo family welcomes its new members gladly.

The Waterloo Disc Golf Club, in Austin, Texas, was created to promote the sport of disc golf to the general public through organization and education, and to give disc golfers a voice in general community issues which impact the sport. The club is also dedicated to the giving back to the community through charitable contributions of our members’ time, talents and treasures.

Troy Herman #32289 is a member  of the Professional Disc Golf Association who currently lives in Austin, TX. He is a Board Member of Austin-based Waterloo Disc Golf Club, where he also manages the club’s website, Twitter and Facebook pages. Troy has been playing disc golf over 15 years competitively and non-competitively, in local and national events. He is an avid photographer and has been published in DiscGolfer Magazine, and Yahoo News, while featured in Austin Man Magazine and The Daily Texan (University of Texas). He also volunteers regularly to promote disc golf, teach kids the sport, clean parks, and help build new ones.

You want your answer to growing the sport , Austin's got your answer when you give it will be given back. Ask them how they have grown and the great stories that have come when you open your heart for others. Thanks to you all.

Thank you Randall... we earnestly try our best. As one of the oldest clubs around here and one of the stewards of our sport, we always strive to improve the community connection and charitable contributions with any event we put our effort into. We support clubs and events far and wide. The RMHCCTX charities truly appreciate our support. We directly work with them regularly and seeing the smiles on the kids and families is priceless. I guarantee that the next $100k will NOT take as long.