Power to the Players: The PDGA Disciplinary Process

Power to the Players: The PDGA Disciplinary Process 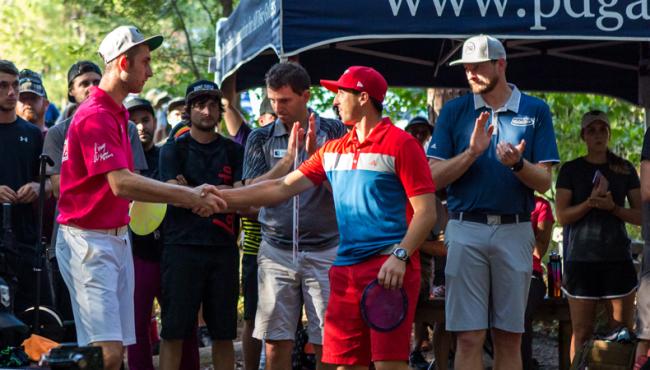 Article by: Justin Menickelli, Ph.D. / PDGA Board of Directors President

In the relatively short lifespan of the PDGA, there has been a slow but steady trickle of misinformation on how player disciplinary issues are handled by the organization. Confusion has led to frustration, and even anger a few times. Some have even suggested an alternative disciplinary process for different professional tours. I will attempt to clear up some of this confusion about the PDGA disciplinary process and explain why the PDGA is as much of a players’ union as it is a governing body.

It is not surprising that many players are either unaware or confused about the PDGA disciplinary process, after all, it impacts very few members. Of the nearly 40,000 active members of the PDGA, around 80 (only 0.22 percent) are currently serving a suspension or probationary period. About 70 of whom are tournament directors that owe tournament fees to the PDGA. Around ten (or 0.02 percent of active members) have egregiously violated rules or found it challenging to adhere to the Disc Golfer’s Code of personal responsibility: Play smart, Respect the course, and Represent the sport. Most players, particularly experienced ones, abhor disgraceful behavior during competitive rounds and applaud the PDGA for discouraging such behavior.

Unlike most team sports like football, baseball, and basketball, both disc golf and traditional golf are sports in which players call their own rule infractions.  Golfers of all types, in essence, police themselves. PDGA rule violations that result in suspension are extremely rare. Most suspensions involve players witnessing inappropriate behavior during a sanctioned tournament round, then reporting it to a tournament director. The most common of which I describe as the “series of poor throws followed by a total meltdown.” Nobody seems to lose their cool when things are going well. The tournament director may then choose to file a report with the PDGA and the ball gets rolling—uphill at times.

A committee made up of amateur and professional players, appointed by the elected members of the board of directors, thoroughly and fairly investigates potential disciplinary infractions and decides if a warning, probation, or a suspension is warranted. Contrast this to other sports where commissioners, and not player representatives, ultimately decided a player’s punishment. (Hint: rhymes with “Deflategate.”)  The PDGA Executive Director is not involved in the disciplinary decision process. He simply ensures that a certified email is sent to the offending player-- not exactly a broad grant of power. The board of director’s president, in most cases, only drafts the letters.  Any player disciplined by the PDGA may choose to appeal to the disciplinary committee and the BOD president.

As of this year, we send certified emails in lieu of certified snail mail letters in large part because players asked us to do it. Among the many advantages to using email, touring players can readily access a certified document on the road. This is one reason why it is important to make sure that the email associated with your PDGA membership is up to date.

Seattle Seahawks running back, Marshawn Lynch once quipped, “I’m just here so I don't get fined.”  Maybe Lynch would be more at home with a disc than a football because the PDGA doesn’t fine players. I suppose we could but with professional disc golfers earning so little relative to other professional athletes, it seems exceedingly punitive. I am not sure how it would work with amateur players. Perhaps we could fine them product. Kicked the basket in disgust? Gimme’ your favorite putter. All kidding aside, it would take a formal resolution on behalf of the players for the PDGA to start issuing fines.

The World Anti-Doping Agency lists over 100 banned androgens, hormones, stimulants, diuretics, narcotics, and cannabinoids-- and the PDGA doesn’t test for any of them. Drug testing is a very expensive proposition and again, it would take a resolution by the players for us to consider doing so. Each year, a few players are disciplined for using alcohol or drugs during competitive rounds. These are typically at larger events where spectators and media may be close enough to witness such alcohol or drug use. Image is important and we don’t want to detract from the spectacular athletic play. If we want disc golf to be considered for the Olympics someday, we will have to address drug testing. For now, our requirements are much more modest—we are simply asking players not to partake during competitive rounds. If you have a local IPA to share, chances are I will drink it with you when our round is complete (note for anyone who wants to take me up on this: I prefer New England IPAs—the hazier, the better).

At the 1984 Worlds in Rochester, New York, "Steady" Ed symbolically handed over the PDGA reigns to the first commissioner, Ted Smethers, with a handshake and a can of locally brewed Genesee Cream Ale. The PDGA became a player-run organization and we never looked back. In my opinion, our disciplinary process is and should be more educational than retaliatory. In the future, I hope it continues to affect very few players. In the PDGA, the players administer discipline and we alone have the power to change the process as we see fit.

Justin Menickelli is the newly elected president of the board of directors of the PDGA, co-author of The Definitive Guide to Disc Golf book, and the 2015 PDGA/EDGE award recipient.  He lives in the Smoky Mountains of North Carolina with his wife Kristin, and three children:  Aidan, Noah, and Addison.

I am proud to be a member of the PDGA and firmly agree that discipline is an important factor if we are to continue to grow the sport. While I have rarely seen misconduct on the course, I am appalled to see so many TDs sanctioned for failing to follow through with their tournament fees. I am sure this is as much a minority of TDs as the current sanctions are on players. I would be interested to know if a TD never submits the fee, are they sanctioned for life?