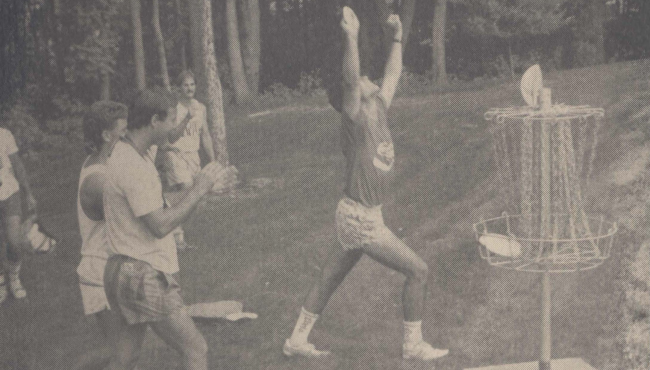 This is the first in a three-part series celebrating the pageant and history of the PDGA Professional Disc Golf World Championships. Special thanks to Joe Feidt for contributions to this story. Pictured Above: John Ahart in 1988.

There are several methods for trying to identify various “chapters” in professional disc golf history. One could simply examine the sport by decade – the 1980s, 1990s, and so on. Or, one could identify “eras” dominated by certain players. One might even look at major milestones in equipment development, or in the PDGA’s structure, to find the benchmarks for the end of one chapter and the beginning of another.

But, flying disc sports have always championed finesse – a knack for “feeling” what makes sense to get to the target.

That technique is on display here, in an attempt to briefly summarize 40 years of PDGA Pro Worlds history into three parts.

For some, it will be a recap. For others, an introduction.

“Jumpin’” Joe Feidt is the editor of DiscGolfer magazine. Thorough readers already know Joe – his “First Tee” column appears at the beginning of each quarterly issue.

When compiling a short list of disc golf historians – especially those with detailed knowledge of the sport’s foundational years – Joe occupies a big seat in a small circle.

Within minutes of our long-distance conversation, at Joe’s prompting, I had multiple browser windows open on my computer screen. PDGA records, event pages, winners’ lists and, most notably, the archives at flyingdiscmuseum.com.

“The early Worlds were wide open. Lots of good golfers from all over.” said Joe. “Any of about 15 players had a chance. No single dominant player.”

For those living in a tl;dr (too long ; didn’t read) world, the early years of Pro Worlds sum up like this:

Pro Worlds in the 1980s visited a number of early disc golf hotbeds, including Huntsville, Tulsa, Charlotte and Toronto – the only Worlds hosted outside the United States (so far).

Los Angeles hosted the first Pro Worlds in 1982. Seventy-six players competed with Harold Duvall crowned as first world champion. (Of note, there was no women’s division.)

Participation was strong throughout the decade, with field sizes eclipsing the 200 mark on several occasions. A women’s division competed beginning in 1983. Marie Jackson was the first FPO world champion.

But, why stop there…?

A Deeper Dive… in the words of Joe Feidt

The first Pro Worlds was held at three LA-area courses: Whittier Narrows, Sylmar and La Mirada. Why not Oak Grove? Only Steady Ed knows. This championship was organized quickly; Steady Ed tabbed Dan Mangone, his Wham-O regional rep for LA, to be tournament director. Only Wham-O discs were used, and there was no FPO division.

Tom Monroe and Lavone Wolfe took over the tournament in its second year. The 1983 event was open to all manufacturers’ discs including the new “Eagle” (the Aero prototype) from Champion Discs, and the “Puppy” from Destiny Discs. For the first time, an FPO division competed, along with some masters and grandmasters divisions.

Tournament Director Jim Palmeri, an experienced showrunner, steps in to run disc golf’s biggest event. Marie Jackson Elsner goes back-to-back. Perhaps the most noteworthy occurrence at this world championship is what happened at the players meeting before a single disc was thrown: Steady Ed Hedrick ceremoniously hands over control of the PDGA to the new PDGA “Commissioner” Ted Smethers, sealing the deal with a green bottle of Genesee Cream Ale. Libation aside, this moment is one of the most significant in PDGA history.

Charlotte emerges as a hub for disc golf in the southeast United States. Johnny Sias makes an ace in the final round en route to a seven-shot victory in the MPO field.

Vanessa Chambers repeats as FPO world champion at, so far, the only Pro Worlds to be held outside the US. Players, staff and spectators must ride a ferry to Toronto Island every day, and in the end are treated to a shocking ending in the MPO division. Canadian champ (and crowd favorite) Mike Sullivan competes in a playoff with Gregg Hosfeld who is not well known outside of his home base in Florida. On the final hole, Mike’s “perfect putt” somehow spits out, and Gregg makes his to win. 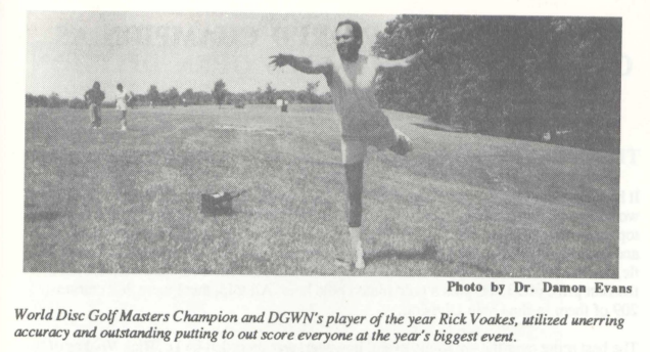 In 1988 in Ohio, open and masters players all play the exact same courses, from the same tees to the same baskets. And, a weird thing happens: Dr. Rick Voakes—in the masters division—has the lowest score of ALL male players by 5 shots. To this day, some think Rick should be declared overall champion. Regardless, “The Amazing Dr. Rick” moniker is born. 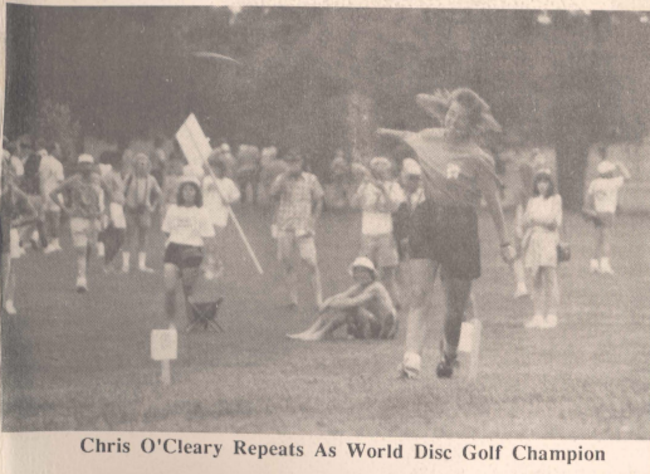 Chris O’Cleary becomes the third back-to-back FPO world champion in seven years. Meanwhile in the MPO division, an unknown 19-year-old, long-armed kid from Florida makes his first appearance at Worlds. With his doubles partner, CR Willey, they surprise everyone (except themselves probably) by winning the doubles world championship, foreshadowing things to come. The kid, Ken Climo, finishes 5th in his first Pro Worlds.

He would become “The Champ,” in the coming years. How? Stay tuned for Part 2…

Johnny Sias had a near ace in the final round, it actually got rejected.

Gregg Hosfeld was actually well known as a comedian, juggler, course collector... he was probably one of the most well known disc golfers.

I started playing in 1988 at Adler Park in Libertyville, IL. I was not yet aware of the PDGA nor the World Championship. Thanks for a walk down memory lane.

Gregg is also known as the "Miniac" and is an accomplished Freestyler.