Roll the Credits on this Epic 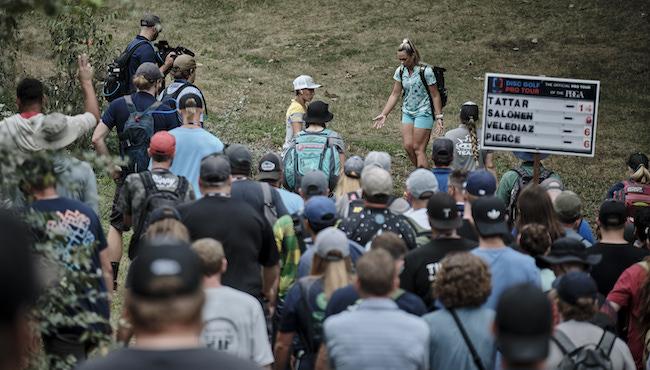 Are you not entertained? The gallery jams the fairways to follow the FPO action at Pickard Park.

Most Broadway scripts are written in three acts.

The first act “sets the stage.” We learn about the setting, who the stage-players are, and how the plot takes shape.

The second act is vital. It provides the buildup for the final, climactic moments of the story.

That said, the third act is the reason why we watch. If it disappoints, the whole production falters.

But if it thrills, we’ll come back again and again.

In FPO, Things Got Interesting... Then a Fitting Conclusion

Kristin Tattar opened play on day one with a scene-stealing 9-under. Then on day two, Eveliina Salonen made things interesting, getting as close as three strokes.

On Sunday, with Macie Velediaz and Paige Pierce leaning into the picture, Tattar tried to reassume the leading role, but struggled, as Salonen closed to within two strokes after a Tattar double bogey on hole 10 and Salonen’s own birdie on 11. 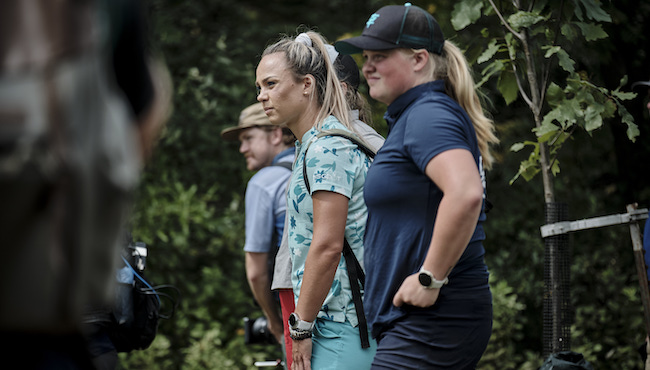 On the back nine on Saturday and again on Sunday, Eveliina Salonen (right) pressed Kristin Tattar to showcase her best golf when it counted most.

Then, on the stretch run at Pickard Park, Tattar birdied three-of-four holes to resume control.

On hole 18, in front of a packed house, Tattar tapped out a par, securing a four-stroke victory and making herself a three-time victor on the Disc Golf Pro Tour’s top series in 2022.

Heading into Sunday’s final round, a few players were typecast as the front runners they typically play. Paul McBeth, Kevin Jones and others found themselves part of a crowded list, and hoped to issue an expectedly excellent performance.

Several others were looking for their big break on the sports big stage. Evan Smith and Niklas Anttila, plus a few more.

Some shone. Some faded. And in the end, a superstar and a newcomer shared the stage – and 18 final round holes weren’t enough to determine a conclusion involving Simon Lizotte and Robert Burridge. 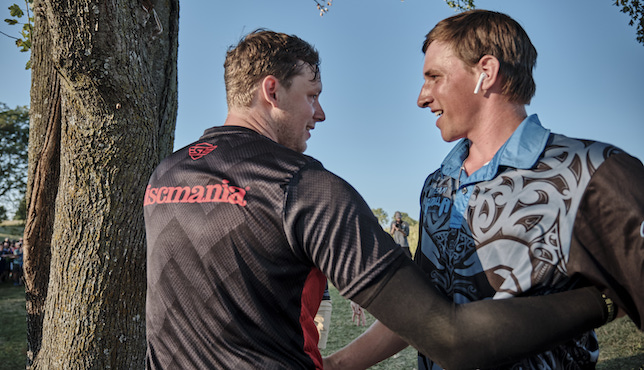 Suspense built, as scores between Simon Lizotte (left) and Robert Burridge swung back-and-forth on the back nine on Sunday.

Simon Lizotte is a two-time Disc Golf Pro Tour winner in 2022. Robert Burridge is the 2021 United States Amateur Disc Golf Champion. And, between the two, the drama hit its stride on hole 12, where Lizotte missed the mando and Burridge carded a birdie.

Just three holes later, at the par 4, 15th hole, the two-shot-swing swung the other way, with Burridge taking bogey and Lizotte taking birdie. Lizotte would ultimately birdie each of the last five holes in regulation.

On hole 18, both Burridge and Lizotte holed birdie putts in front of overflowing bleachers, and the Des Moines Challenge went to a sudden-death playoff.

On hole one, Burridge’s potential tournament-winning putt from just outside the 10-meter circle went wide. On hole three, Simon matched a deep Burridge putt with one of his own to push the match another hole.

Then, on hole 4 of the playoff…

Burridge’s sky-high drive over the water angled to the ground just a few paces from the basket, but skipped off a tree stump and landed outside the circle. Lizotte played his drive very wide, slicing into dry land close enough to the basket to force Burridge to putt first.

Seeing water just steps beyond the basket, and seeing the remaining length for Lizotte’s putt, Burridge elected to layup for par, and the moment fell to Lizotte.

Before the putt reached the chains, Lizotte pointed toward the massive (and massively pro-Lizotte) gallery, and a Lizotte-roar echoed over Pickard Park.

Simon Lizotte, the 2022 Des Moines Challenge winner is a three-time winner of an elite series, DGPT event in 2022. 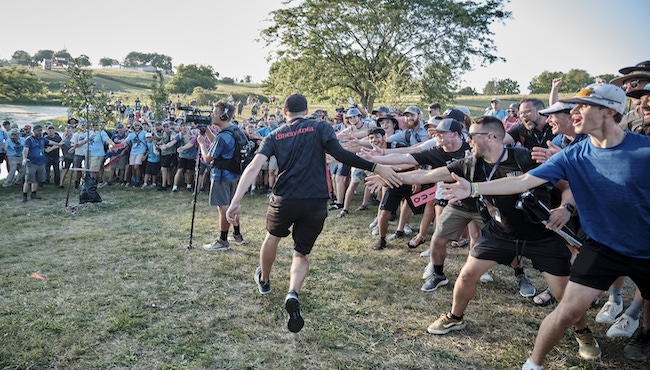 Simon Lizotte rewards the Iowa spectators with his third DGPT victory lap of 2022.