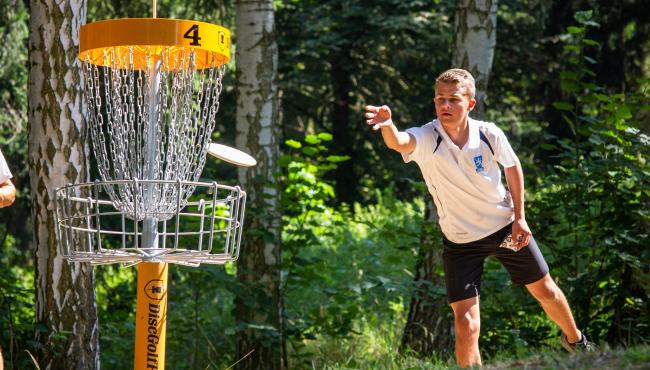 The biennial European Championship is the most prestigious and magnificent disc golf event in Europe. This year was no exception either, although we had to wait longer than normal when the event was postponed from 2020 to this year due to COVID19. 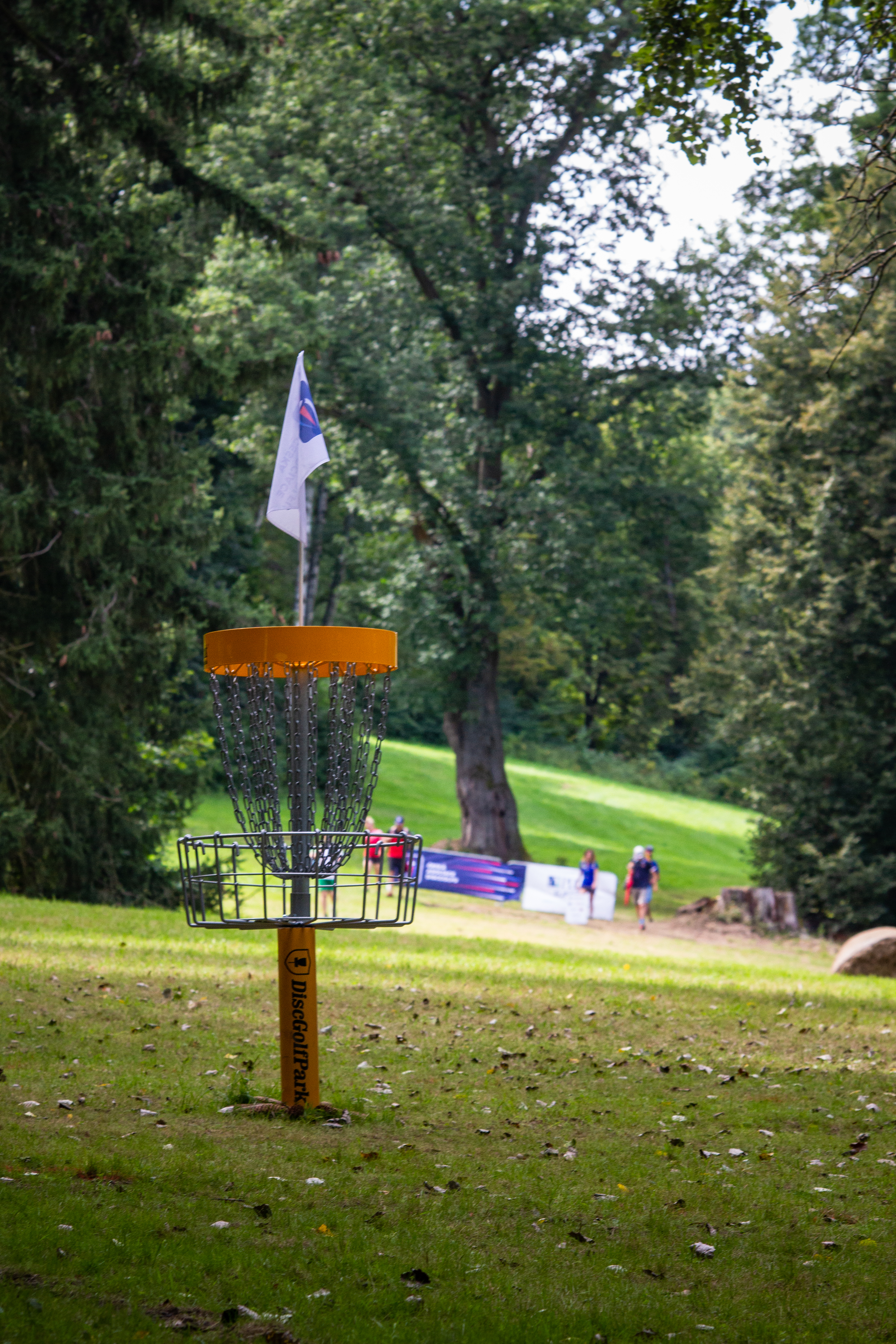 Konopiště was the stage for the 2021 European Championships. Photo: PDGA Europe

With a combination of forested holes and open fairways, the course presented the competitors with a relentless challenge that required an accurate placement of each throw and the ability to take advantage of opportunities to grab a birdie at the end of long fairways. Master and Female Juniors divisions competed on a new 2,259-meter par 62 Konopiště Meadows course that follows the same style as Franz Ferdinand, but the fairways are a bit shorter.

Players who were qualified to the event to represent their own country had already earned a huge reason to be proud. They were selected by their national associations and team captains were selected based on merit. All told, more than 300 of Europe’s top disc golfers from 26 countries participated in this PDGA-sanctioned event. 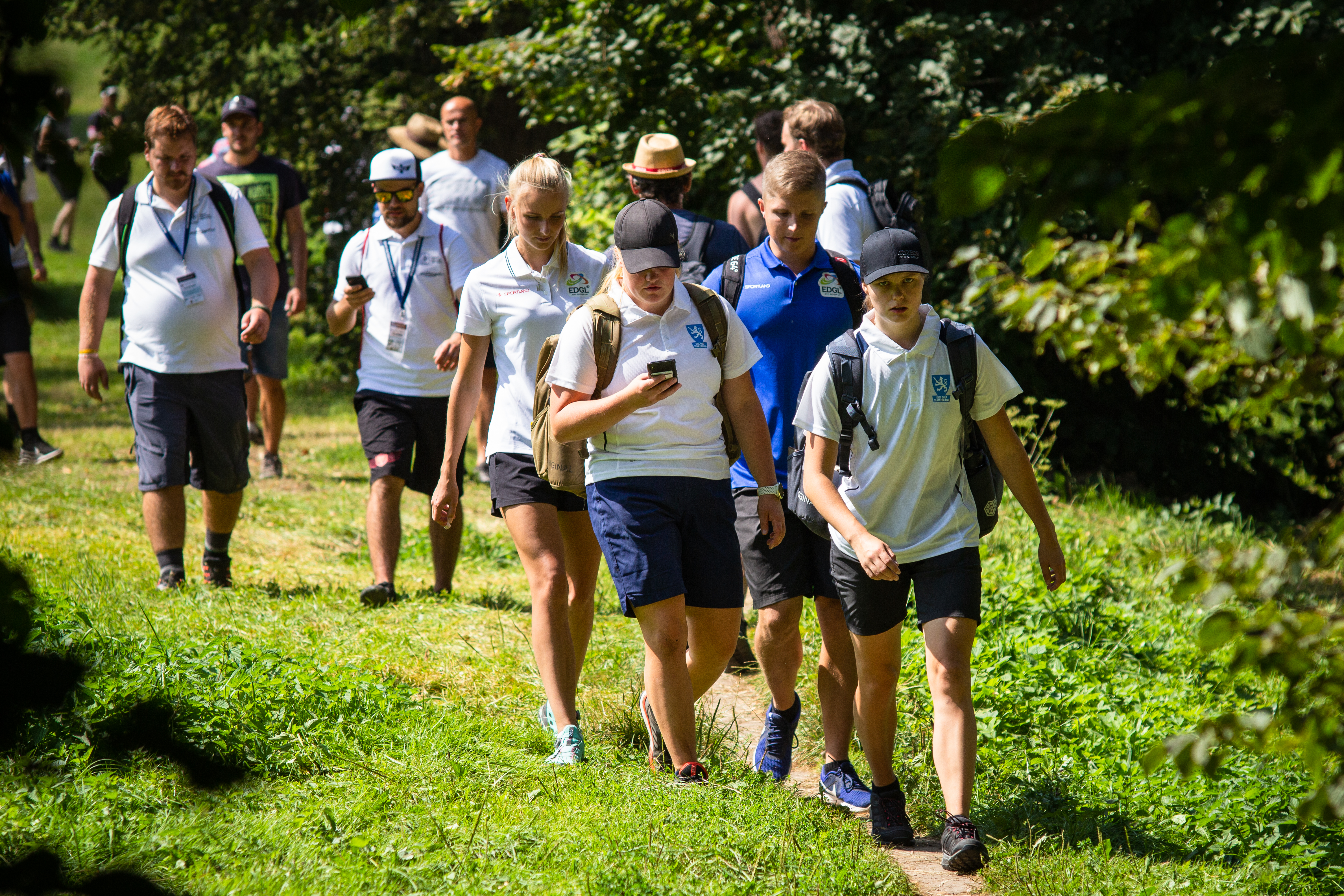 Henna Blomroos walks to the next hole at the 2021 European Championships. Photo: PDGA Europe

From day one, it was clear that non-traditional powerhouse countries had taken tremendous steps in disc golf and the gap between the countries is smaller than ever. It was even hard to find favorites to win the titles because the level of the tournament was exceedingly high. 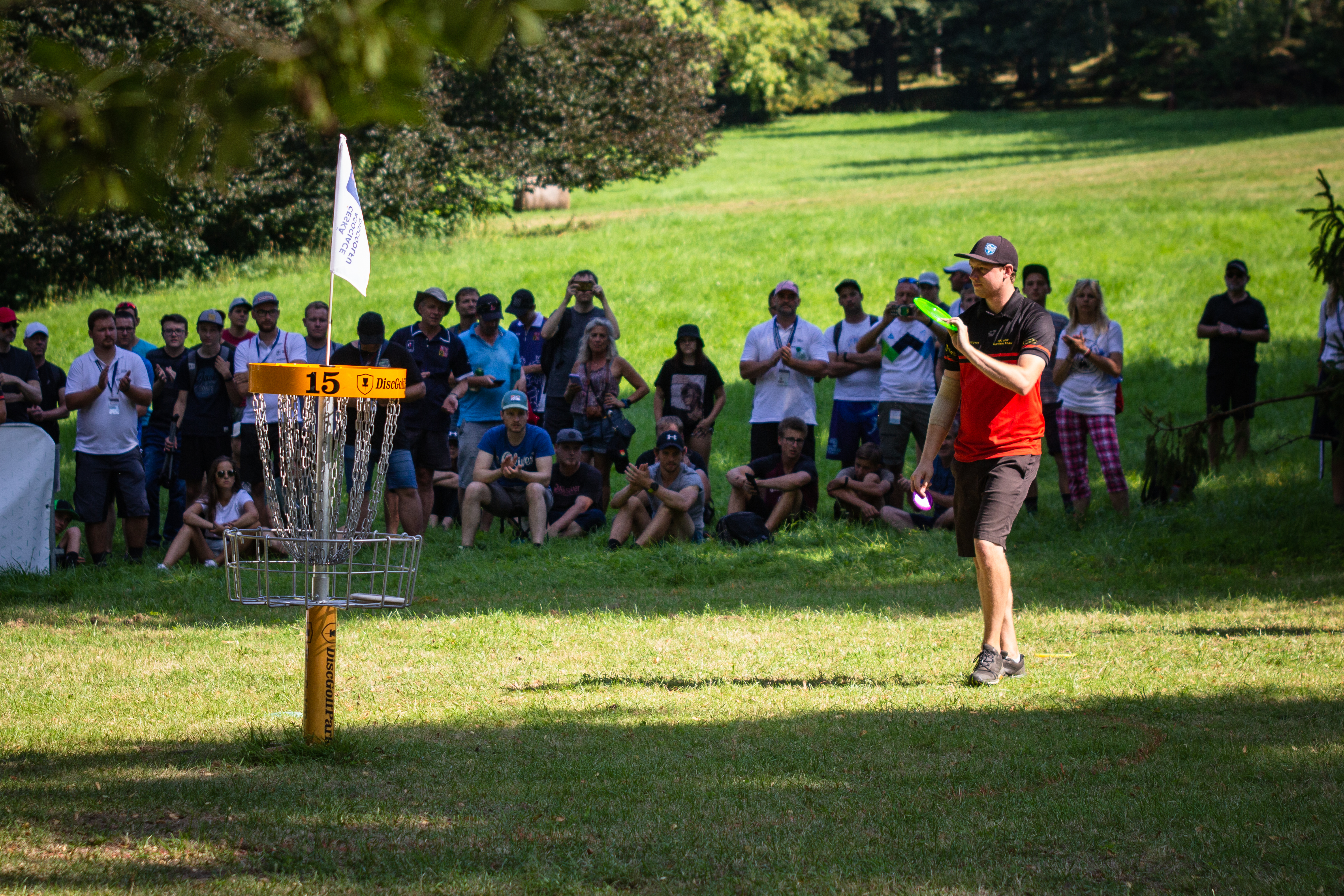 Simon Lizotte finished in a tie for seventh at the 2021 European Championships. Photo: PDGA Europe

After three rounds, the field was cut to the top 50% plus ties, with those who had failed to stay in fairways and make the clutch putts reduced to spectators. When the final putts nestled in the chains with tears of happiness, seven different nations tasted victory.

While Finland led the medals table with seven, all told players from nined countries were called to the podium, including the first ever medal for Poland.

Here’s how the drama and excitement unfolded:

Reigning Finnish Champion Niklas Anttila won the European Championship in Open. He led by two throws before final round and remained calm under pressure while Swede Linus Carlsson really put a lot of pressure until the very last putt. These two players proved to be in their own class during this tournament. Anttila led by one on hole 18 and both were circle 2 after first throws. Carlsson got a chance to force it to playoffs, but his putt was just an inch too high, and the battle was finally over. 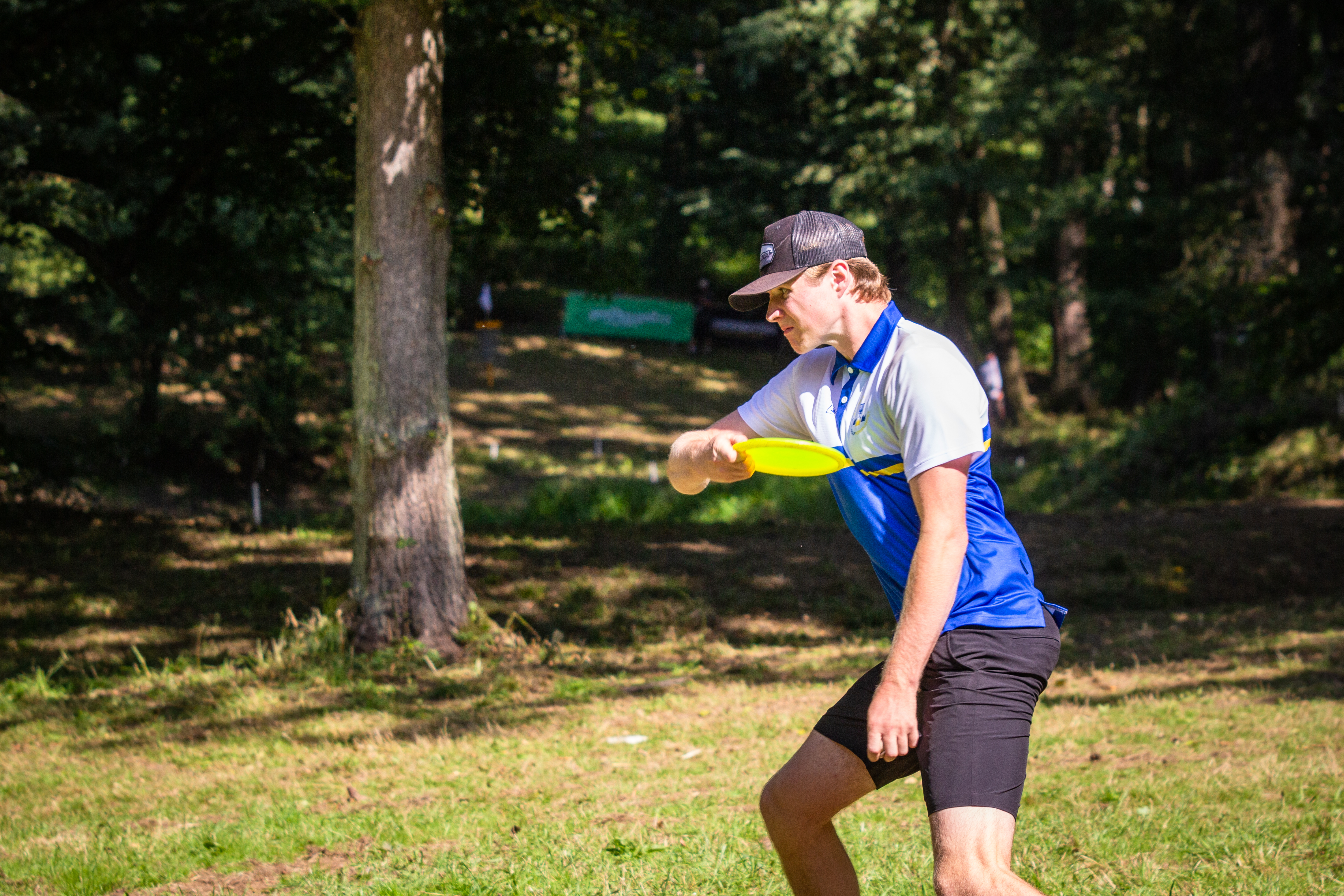 After slow start, Finnish Joona Heinänen woke up to fight for the bronze medal, and no longer agreed to give up his third-place position.

Eveliina Salonen, Kristin Tattar and Henna Blomroos were competing in the FPO and it seemed to be Finnish Eveliina Salonen´s show as she seized control with a superb 1019-rated second round, and then stretched her lead to six throws.

However, on the 18th hole of the third round she took triple bogey with five putts and failed to fix her game for the final round and lead was gone during front nine.

At the same time, Estonian Tattar and Finnish Blomroos continued to play even better and they proved why they are one of the best female players in the world. Blomroos took birdie on hole 14 and 15 when Tattar had to settle for par, causing the lead to increase to three throws. That was enough for Blomroos to secure the title, Tattar took silver and Salonen bronze. 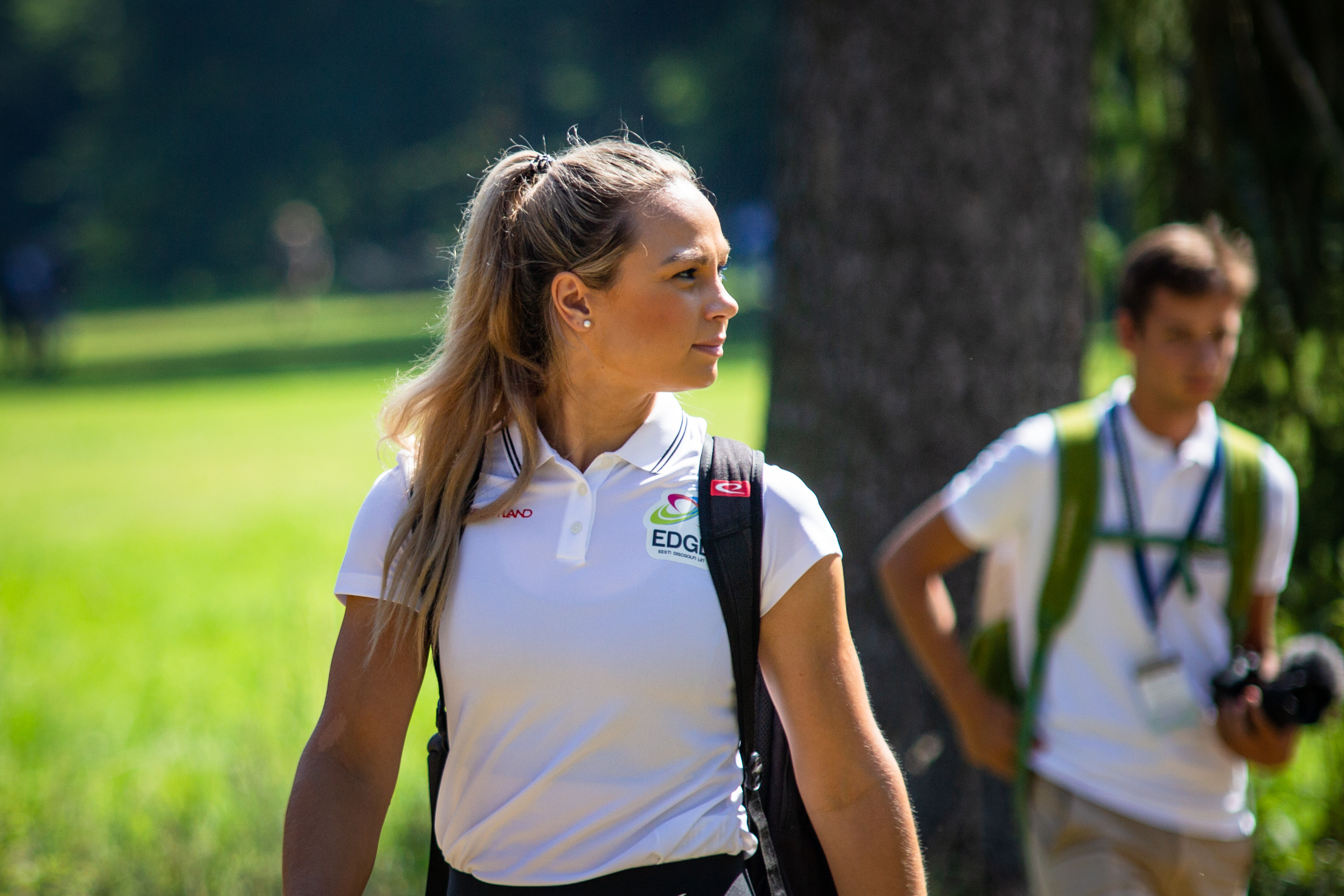 Denmark’s Karl Johan Nybo finished the tournament in style, with an eagle on hole 18 which guaranteed him the MP40 title over Finlander Ville Piippo. Slovakia’s Katka Bodová cruised home in FP40 by 14 throws, with Swiss Natalie Holloköi grabbing silver.

Complete coverage of the 2021 European Championships»

Swede Richard Kappling, Swiss Paul Francz and Lydie Hellgren earned the titles in MP50, MP60 and FP50, respectively. Charlie Mead was the winner of the MP65, which was his eighth European Championship medal.

The Finns were victorious in the Junior divisions as well. Silva Saarinen ran away with FJ19 and Daniel Davidsson threw an amazing 34-under total score, average 1026-rated disc golf, to taste gold in MJ19. That would be good enough for third place in MPO.

On behalf of all the players, team captains and disc golf lovers who had the privilege of being here or watch the event, the PDGA and PDGA Europe would like to extend its sincere thanks to the tournament director Kryštof Novák and all of the amazing volunteers, for their stellar job in organizing and running this first-class event. Special thanks go to media teams More Disc Golf and SpinTV, who make it possible to watch the event to those who did not get to the venue.