Memorial Championship Produces Yet Another Unforgettable Final Round

Memorial Championship Produces Yet Another Unforgettable Final Round 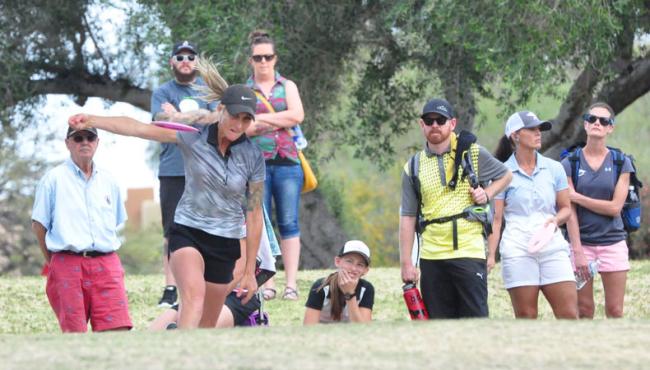 Final round drama has become somewhat of an expectation at The Memorial Championship presented by Discraft these days. Somehow, year after year, the event always finds a way to deliver. Whether it’s the sudden death playoffs of 2013 caused by a scorecard error penalty, the insane out-of-season flooding of 2014, or the huge putts by Jeremy Koling and Paul McBeth on the 18th hole to force a playoff in 2015, The Memorial Championship and Fountain Park DGC always finds a way to produce a nail-biting, adrenaline pumping finish.

To say this year was no exception, would be a serious understatement.

After three days and 54 holes of competition, the fight for the title had come down to just two women, Catrina Allen #44184 and Paige Pierce #29190. Sound familiar? Well, it should. Today wasn’t the first time that’s happened, or the second, or the….twentieth. The back-and-forth between Catrina and Paige has been going on for years at this point, and this week was no exception.

The two of them were joined by Jennifer Allen #15354 and Sarah Hokom #34563, taking to the intimidating tee of Hole 1 at 10:45am. Both Catrina and Paige put their drives inside the circle and nailed their putts for birdie, a feat that only seven of the top 20 Open division players pulled off from the same tee pad later in the day.

Paige evened up the scores with another birdie on Hole 2, but would end up losing a stroke to Catrina on both Holes 6 and 7. Catrina was on fire off the tee, and she remained that way for the entire round. Unfortunately, something was off with her putting game. More specifically, something was off with her putting game inside the circle. Nerves? Perhaps. But she’s been in situations like the ones we saw today dozens of times, so it’s hard to say.

On Hole 8, with Paige parked for birdie, Catrina missed a 20’ putt for par, giving the world’s #1 ranked female disc golfer a free pass to tie it up. Catrina kept her head in the game despite the uncharacteristic putts, and earned herself another lead of two after parking Holes 11 & 12 for birdie.

Paige runs a putter right at the pin. She'll be about 10' out for birdie. pic.twitter.com/Q57FHOZg8x

Taking a risky 35 attempt at birdie to an elevated basket on Hole 13, Catrina’s putter missed the cage and chains entirely, leaving her with a 10-12 foot chance to save par. In a similar fashion to five holes prior, she missed while Paige tapped in for birdie, and it was all tied up again.

Catrina gained the lead once again on the following hole, but the nightmare wasn’t over. Catrina, Paige, and Jennifer all parked Hole 16 in front of the gallery, grouping their three discs on a 370’ hole inside of 15’. Jennifer tapped in, followed by Paige, and then…chain-out for Cat as most of the gallery was already walking away. The score was tied up once more, this time with only two holes remaining.

They were still tied on 18, and Catrina took to the tee first. A decent headwind made the drive even more difficult, as there is flagged OB on the right and the lake on the left. Both Catrina and Paige threw drives that flipped up and headed towards the flagged OB on the right. Somehow, both of them curled and rolled back inbounds, nowhere near in range to make a birdie putt to such a dangerous pin location.

Cats shot goes out wide with the headwind but manages to stay inbounds. pic.twitter.com/tMQOZTYq28

Paige tossed a putter to roughly ten feet of the pin. Catrina parked hers even closer. The crowd began getting anxious, with the excited rumblings of a playoff dominating the chatter. As some of them began to head over to Hole 1 for the playoff, Paige stepped up and tossed her putter into the basket. It hit chains low and left, made it’s way through the links, hit the top of the cage and fell to the ground.

It was shocking, and perhaps the most dramatic and least dramatic way the four day battle could have ended, all in one moment. Catrina dropped her putter in for the victory shortly after, and although Paige was visibly upset, the two embraced with a hug before the crowd and players scattered over to Hole 1 to watch the last few cards of the Open division tee off.

Congratulations to Catrina Allen #44184, the 2016 Memorial Championship winner of the Open Women’s division. And thank you to Paige and all of the women that competed that made the event so fun to watch.

Somehow, with all of the aforementioned madness, the Final Round drama was still far from over. The Open division lead group, followed closely by a massive gallery, featured some of the best players on the planet with Nate Sexton #18824 on top of the card. Going into the Final Round with a well-deserved lead after his performance at Vista Del Camino the day prior, a three-way tie for 2nd place just one stroke back was perched and ready to take advantage of even the tiniest of errors.

Tied in 2nd place was JohnE McCray #9852, Philo Brathwaite #26416, and the reigning #1 ranked disc golfer in the world, Paul McBeth #27523. With McBeth being the only player in the group with any PDGA Major or National Tour victories under his belt, it was definitely interesting watching how the others handled the high-pressure spotlight.

Luckily for the spectators and those watching at home via the SmashBoxxTV live feed, all four men played spectacular disc golf. Not a single hole was left un-birdied, meaning the fans got to see at least one great drive and/or one great putt on each and every basket. Furthermore, the same can be said about the chase card as Simon Lizotte #8332 and Nikko Locastro #11534 put on a show, carding a total of 27 birdies between just the two of them.

It wasn’t too far into the match where the momentum was starting to swing in favor of Sexton and McBeth, leaving Brathwaite and McCray in a battle for 3rd place. By the time they reached the Back 9, Sexton still held a lead of one over McBeth, both shooting bogey-free with six birdies.

McCray and Brathwaite on the other hand each had two bogeys, with five birdies and four birdies, respectively. Losing three and four strokes to the leaders is a fairly fatal start at Fountain Hills, considering the Back 9 is without question a much less dangerous run of holes. Unlike the treacherous Front 9, the only real water hazard on Holes 10-18 is Hole 18 itself.

The traveling companions and great friends that are McBeth and Sexton were duking it out alone at the top, setting their friendship aside momentarily in the spirit of competition. McBeth was playing better off the tee overall, leaving himself with much easier looks at birdies, but that wasn’t about to slow Sexton down.

Sexton’s putting game was absolutely on point. The gallery and the pressure of the situation didn’t seem to bother him much, continuously nailing 35, 40, 45, and even 50 foot putts to keep his lead alive throughout the entire round.

Sexton with another big birdie putt. This time on Hole 11. pic.twitter.com/qFm4Xj4Iws

It wasn’t until Hole 14 that he finally left one out there, giving McBeth a chance to tie it up. Sexton left himself with a long and tricky uphill jump putt, with a low ceiling created by the branches hanging from the tree on the green. He missed the putt, and McBeth tapped in from inside of 10 feet to tie it up. With McBeth being arguably the best at thriving in high-pressure situations in the history of our sport, giving up sole ownership of the lead, with just four holes to go, isn’t exactly ideal.

They would remain tied for the next two holes, carding pars on 15 and birdies on 16. Facing the lake, the fountain, and the majestic backdrop of Four Peaks and the Mazatzal Mountains, their drives on the 525’ downhill Hole 17 soared through the air, passing over the top of the gallery as they faded towards the green. Sexton left himself hole high, but way out to the left, while McBeth left himself much closer, just a few feet outside of the circle.  Sexton gave it a good run, but had to settle for par. After 17 holes, McBeth had finally taken the lead.

With the gallery lining the right side flagged OB of the fairway of Hole 18, and the OB lake on the left, McBeth pured a fairway driver on a low B-line directly over the water. Giving it just enough speed to flip up ever so slightly, the driver hit the grass and could only continue forward, assuring no chance of it fading out and skipping left towards the water.

“This putt is only 25 feet, but it’s gonna feel like 45 feet,” said McBeth as he waited for his turn to step up to the green in front of the gallery, all of whom were holding their breath. McBeth is no newcomer to victory at The Memorial Championship presented by Discraft, winning it in 2011, 2012, and 2014. He is however all too familiar with what can happen in a sudden death playoff, losing to Will Schusterick #27094 in 2013 and Jeremy Koling #33705 in 2015.

Painful memories aside, McBeth stepped up and did what he does best, nailing the putt in front of the crowd, all of which were holding their breath.

Thank you goes out to SmashBoxxTV for all of their efforts in putting together the daily live broadcasts and after-shows, something we look forward to seeing at many of the PDGA National Tour events coming up later this year. We’re proud to be an official partner and sponsor for what they do, and we look forward to seeing what else they have in store for the rest of the year both with the National Tour and the Disc Golf Pro Tour.

And of course, thank you to all the volunteers and tournament staff that made this, the first event of the 2016 PDGA National Tour, such a great success!

Congratulation goes out to all of the division champions! See you at the next National Tour event, The 2016 Dynamic Discs Glass Blown Open in Emporia, Kansas from April 28-30!

Awesome start to what promises to be an amazing year !
REALLY looking forward to my trip to La Mirada Open, can only hope for an equally amazing finish there !