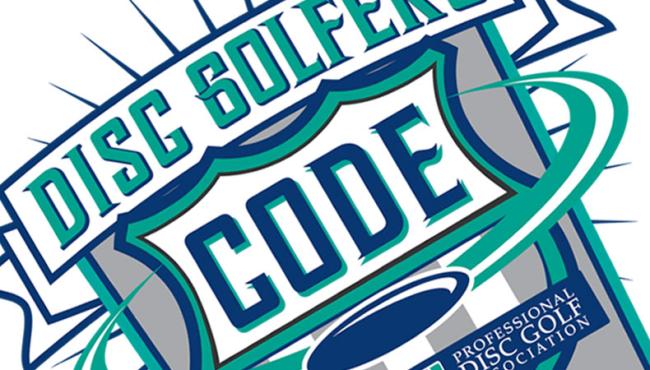 During the 2015 PDGA Board of Directors Fall Summit, I made a statement that caused the room to go silent. A few of the staff looked up from their keyboards with muffled smirks on their faces. One veteran board member appeared to be aghast. A folded piece of paper was passed around the big table and when it got to me, I was thinking there might be YES, NO and MAYBE boxes next to the words “Do you want to be my boyfriend?” like the notes confiscated by middle school teachers. “My first summit and I’ve already caused a stir,” I thought to myself.

It is not so much what I said but to whom it was said. I made a comment that I thought one of Dan “Stork” Roddick’s #3 examples was an exaggeration. Critiquing Stork’s comments was apparently a bit of a faux pas. What most people in the room didn’t know was that my summit roommate (Stork) and I had been up until 1:00 AM the previous night talking about (among other things) personal responsibilities on the disc golf course. I may have been the new guy, but I had done my homework.

Stork has forgotten more about personal responsibilities in disc sports than most people will ever know. After all, he was instrumental in developing The Spirit of the Game used in Ultimate.

“Spirit of the Game. Ultimate relies upon a spirit of sportsmanship that places the responsibility for fair play on the player. Highly competitive play is encouraged, but never at the expense of mutual respect among competitors, adherence to the agreed upon rules, or the basic joy of play. Protection of these vital elements serves to eliminate unsportsmanlike conduct from the Ultimate field. Such actions as taunting opposing players, dangerous aggression, belligerent intimidation, intentional infractions, or other 'win-at-all-costs' behavior are contrary to the Spirit of the Game and must be avoided by all players.”

Stork’s charge was for us, the PDGA Board of Directors and PDGA Staff to come up with a code of conduct that applies to all disc golfers on every disc golf course. It is not enough to say “read the rulebook.” After all, newbies don’t likely own a rulebook and even experienced players don’t often read it word-for-word. The entire rulebook contents don’t fit well on a course sign and during casual or practice rounds, it is just fine not to abide by every rule.

Over the next few months the board and staff developed a concise, universal code of responsibilities that all disc golfers should adhere to at all times on the course. We hope that every player, from absolute beginner to seasoned veteran, will agree to obey the code and spread it far and wide. Simply stated, we think it can only help to improve the sport that we all love to play so much.

Stork, in his infinite wisdom, summarized the Disc Golfer's Code as follows.

"There aren’t many words here, but they may hold the key to the sustainable growth of our sport. Our previously exclusive pastime is expanding at a positively viral rate and we are no longer just a few kids fooling around in the park. If we have aspirations to be a significant part of the global (and local) sports scene, it’s time for us to step up and represent our very best. Consider how many disc golf shots are now taken every day. Each one of those flights is a tangible part of building and maintaining a bright future for our game. Our time has come to get serious about having fun. The Disc Golfer's Code - Know It and Throw It!" 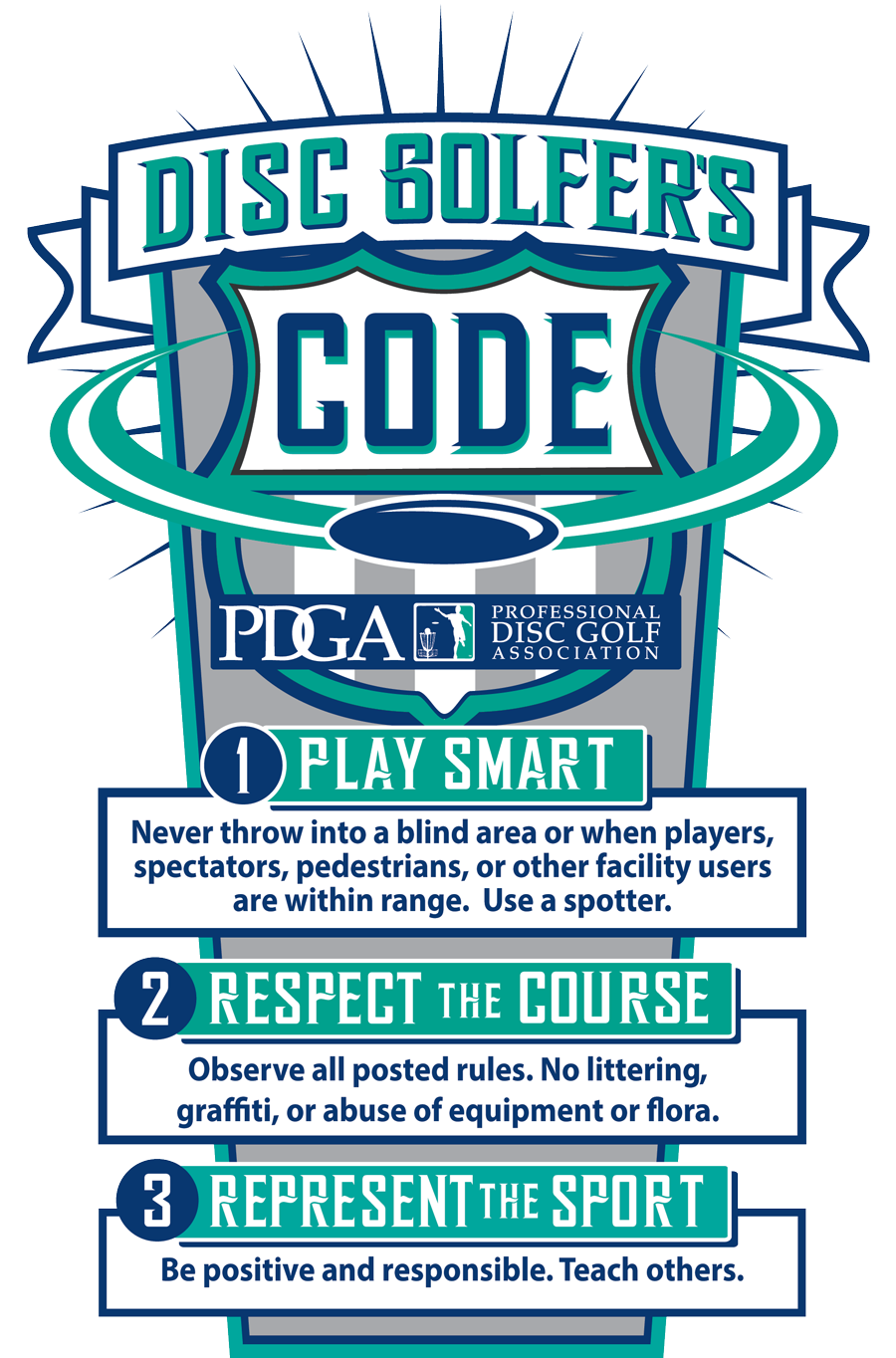 Code of Ethics, COE, PDGA Board of Directors

This would make a Great stamp on the membership discs

Where can we get the signs?

Hello, I am happy to make the signs… everyone in my sign shop plays "frisbee golf"… haha sorry I am old but can throw 300… sometimes where I want it to go… seriously our company has been making signs for the last 30 years. We know how much volunteer time it takes to create a course. Because we are players as well we sell our signs wholesale to disc golfers.. and we ship nationwide… feel free to write us or phone. www.discgolfsigns.org 541 490 7446

Absolutely support "The Code"
Disc Stamps would be amazing....

Most important though, LIVE The Code !!!

I very recently heard a story of a player - Am in this case - who apparently had a total disregard for the rules. This included "inaccurate" scorekeeping and purposely not playing the proper lie for advantage. When confronted multiple times by the rest of his card he took an aggressive attitude towards them. So much so that they backed down somewhat to avoid possible physical confrontation. And they didn't report it to the TD.

While this story comes to me second hand, I'm sure it is repeated occasionally at tournaments everywhere. As former Executive Director of the Ultimate Players Association (now USA Ultimate), I was involved in many Spirit Of The Game (SOTG) discussions and decisions. Besides the concept of sportsmanship in Ultimate, it also meant growing the sport more rapidly by not requiring referees. SOTG was our "team of officials." Yes, for decades Ultimate was self officiated.

In Ultimate, if you displayed a blatant disregard for the rules, your fouls and violations were called by your opponents, rendering your actions -- well, impotent. There was no "getting away with one" because the ref missed your transgression. Those Ultimate players had to change their behavior or quit the sport.

Disc golf is also dependent on un-refereed play and always will be for the most part. Just like ball golf. And eventually cheating players will be confronted and be suspended or quit the game. It just may take longer because instead of the 100 people witnessing an Ultimate game, disc golf competitors are alone with 2 or 3 other players...and sometimes they can be intimidated by a person they really don't know and with whom they have been carded with randomly.

The disc golfers code, as published here, seems to be targeted mostly at new players. In Ultimate, which is your comparison, SOTG applied to ALL players. My point is maybe we can avoid some of the incidents mentioned above if the Code was made a little stronger and was also targeted towards competitive play. I would suggest something like:
#2) RESPECT
"Observe the posted and universal rules of the game. Respect the course and its environment. Above all, respect other players and competitors."

I like your suggestion, but it seems that this code is finalized. To me, it seems incomplete and should have been open to more discussion before being finished. For example "Play Smart" is really about safety and could possibly read "Think Safety First", or "Think before You Throw". I'm not suggesting that these examples be used, but something like these should be considered. And, is it really a player's responsibility to teach others? I mean, I get it. I try to inform others when it seems appropriate, but often it is not and can be received poorly. "Teach others" obviously is well meant, but should it be a part of a code? Maybe "Encourage Proper Golf Etiquette" would suffice? Maybe. The point is, as you approached yourself, there is some tidying up to do with the code.

Thanks to all who have posted their comments. The disc stamp idea is excellent. Course signage information is coming soon.

As a former college Ultimate player (LSU 95-98; Our team captain won the Callahan), I love the ideas posted by nealpdga. This code is targeted at new players but applies to all players-- in both competitive and non-competitive environments. Nealpdga is spot on-- respecting each other is paramount.

Here is where I make a shameless plug for a new book that discusses some of the etiquette and behaviors that nealpdga mentioned. It is obviously a lot more in depth than the Code but worth the read.

The Code is a great idea. Would fit nice on a mini disc too. They would be great give a-ways for tournaments!

Does anyone know if there will be a vector graphic available for us to use?

If it were me, I'd add a fourth. Call The Rules. We have regular discussions in many venues about rules that are ignored, foot faults being a key one. Enhancing rules calling by players would be a good thing! Keep in mind, it isn't my opinion that players are purposefully ignoring the rules; it takes a full on effort to watch what your card is doing.

We will check on the vector graphic. I totally agree with you lyleoross! Keep in mind that the Code is indented for all players during all rounds. During practice or casual rounds it is fine not to abide by every rule (e.g., a player might choose to throw 2 drives from a pad or not keep score).

The sporting instinct influences all behavior in a civilized world. It is the agent that challenges the view that human progress stems from ruthless competition. Individual satisfaction from competition begins with cooperation, as cooperation is needed to mutually establish the conditions where all may compete. We make rules so that our success in competition has universal meaning. Each of us begins with the sporting instinct; then we mis-learn through false examples of achievement. Hope for the outcast remains where personal distinction apart from the community is soon recognized as less sweet than achievement within and for the community. Rules observed without devotion to sporting fundamentals will not sustain us. Understand the rules, and be the sport.

If you have the vector graphic , can we then translate it in German and use it for free, or does it have a Copyright?

Vector art can be downloaded at http://www.pdga.com/files/code/disc-golfers-code-v2.zip

Thank you for posting the file steveganz

Membership discs for new PDGA members are an easy way to get the code out to new members and whatever is sent to renewing members are obvious choices for the PDGA to make to distribute the code.

Can we know the name of the white font...so we can translate the code to other languages? (Slovenian in our case ;) )