The Explosive Growth of Disc Manufacturing

The Explosive Growth of Disc Manufacturing

Story written by our friends at the Infinite Discs Blog. Photo of Dynamic Discs warehouse by Bobby Brown.

As disc golf becomes undeniably more popular, more discs enter the disc golf scene, vying for space in disc golfers bags. These facts about how many discs are being approved today, vs just 10 years ago may blow your mind.

One final way to look at how disc production has changed, is to view the average number of discs approved per year, during a given decade.

Brand status for the last 2 Years

The entire list of 160+ discs that have been approved since 10/15/2012 can be viewed at the bottom of the Infinite Discs Blog. 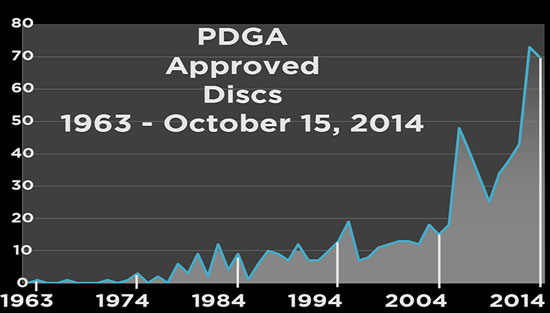 what is the difference between Dynamic Disc and Dynamic/Destiny Disc? Also how can one company take part of another companies name to make another company making similar products?

Dynamic Discs, the company you know of today based out of Emporia, KS is not the same sa Destiny/Dynamic Disc. Destiny is no longer in business. I'm not sure I understand your second question but you should start by contacting whatever company has the name you'd like to borrow from.