The first round of the sole European PDGA Major of the year kicked off at 08:00 this morning in a somewhat chilly and overcast Finnish summer weather. Luckily for our players, the winds today weren’t as high as on the past couple of days, and as the skies held without pouring much any rain on The Beast. Overall the scoring conditions were pretty good for the 18 holes of the 2017 European Open and at the very end, we even saw the clouds parting allowing Nokia to bask in the sunshine.

The young Finns challenge the top US ladies

Over at the Women’s division, a total of twelve women from six different countries set out to conquer The Beast this morning. With 4x World Champion Valarie Jenkins, and 1x Catrina Allen, both fresh off the back of winning the Presidents Cup, the USA brought two heavyweights to the competition.

Nevertheless, it was the freshly crowned 2016 PDGA Europe Player of the Year, Eveliina Salonen (FIN), who took an early lead. She was the sole player who survived the first three holes without incurring any bogeys, and it wasn’t until hole 7 that Catrina (who had carded 2 birdies on holes 5 and 7) managed to catch up with Eveliina. During holes 5 through 10, the field drew a lot closer, with holes that were much more suitable for the Womens Division (6 of the 9 birdies carded in this division took place on these holes). 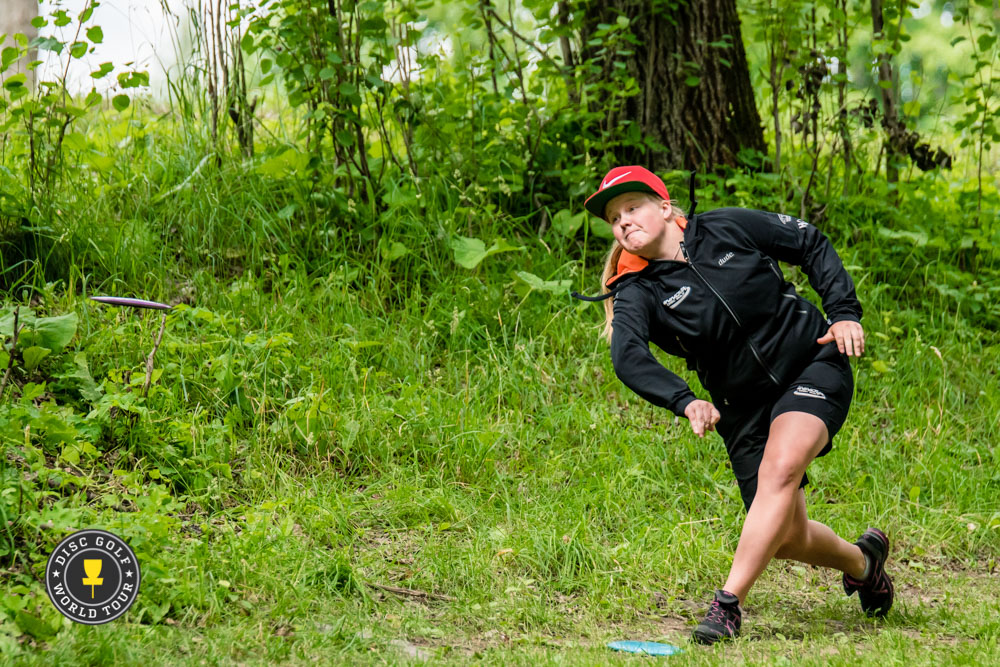 Eveliina Salonen’s long game of the tee gives her an advantage on this course.

Catrina rises on top at the end

Henna Blomroos, managing to string together lone birdies on holes 9 and 10 pulled to the front, and didn’t give up that position until the last two holes, where she found 3 OB’s, that cost her dearly with two double bogeys. Up until that point, it looked like Henna and Eveliina were causing a bit of an upset, by constantly staying just ahead of Val and Cat. But Catrina, being only one of two players to stay bogey-free on holes 17 and 18 (Slovakia’s leftie Katka Bodova being the other) managed to take the lead after 18. 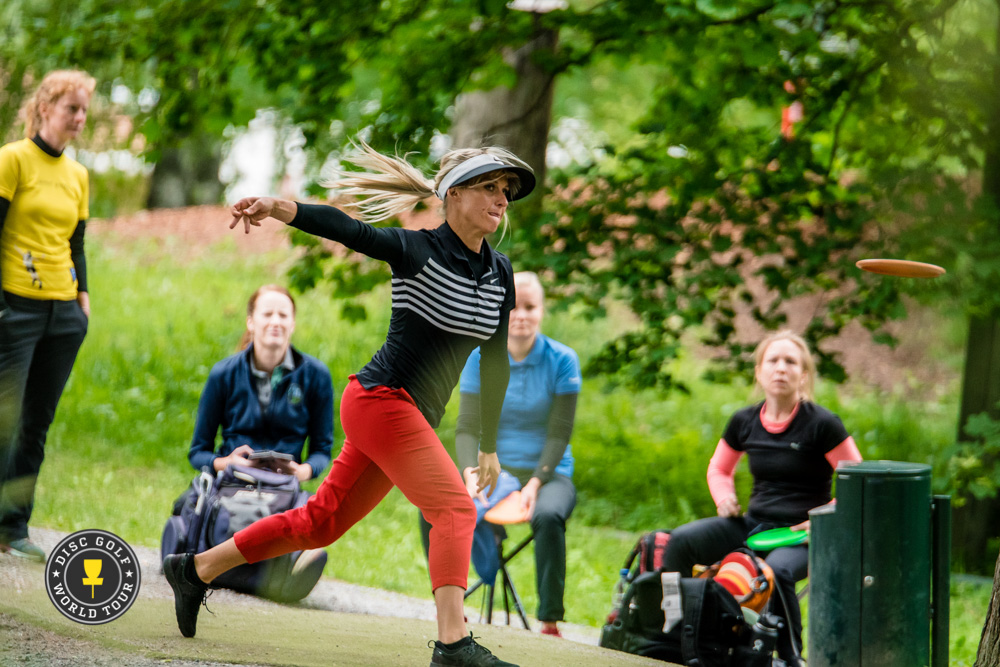 Catrina Allen claimed the top spot on the home stretch.

Tomorrow’s Ladies Division lead card will consists of Catrina, Eveliina, Henna and Valarie. Each in turn 1 stroke ahead of the next. This promises to be an exciting round tomorrow. And don’t rule out the chase card yet, with Katka Bodova, Estonia’s Kristin Tattar, and Finnish Anne Kettunen all continuing that ‘1 stroke more than the previous’ string.

One man above them all 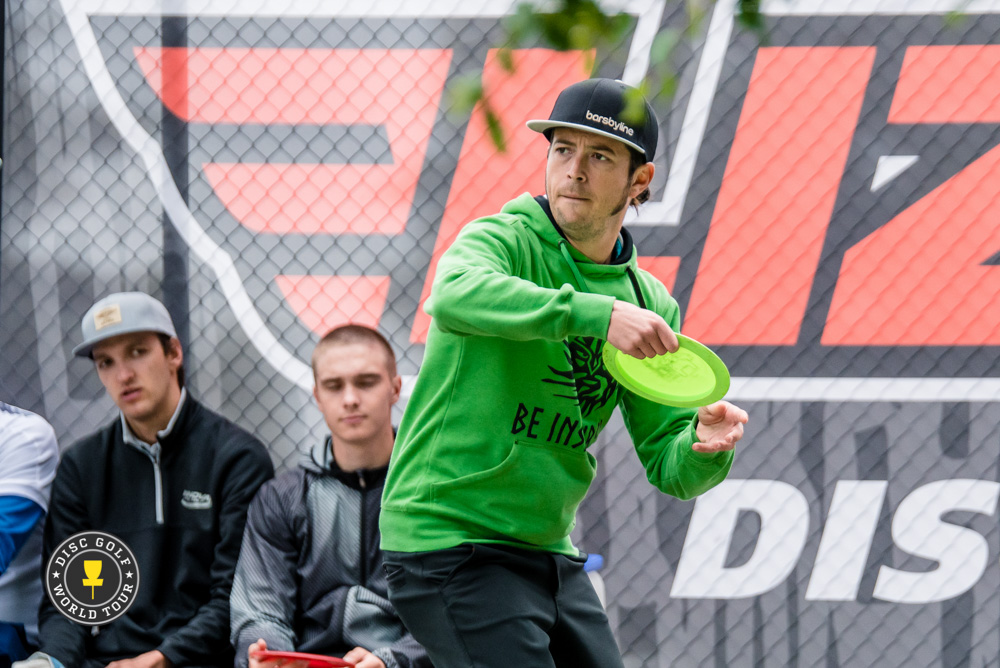 Gregg Barsby is your leader in the clubhouse after round 1.

Over on the Open Division, one man stood above the rest today. This man was Gregg Barsby out of Grass Valley, California, who shot a lights out, bogey-free 11 under par on the Beast this morning. On a course like this, shooting a great score is really up to keeping your head cold all the way until the last putt and that’s what set Barsby above the rest of the field today: despite getting a penalty stroke on both the 16th and the 18th, Gregg was able to keep his game together and save his par on both holes.

Video: Paul McBeth was picking up birdies left and right until the last hole.

For a long time during round 1 it looked like the 3-time and defending European Open champion, Paul McBeth, could very well be able to catch Barsby’s score, but had to settle for a -9 after hitting a bogey on the last hole, as his upshot found OB in front of the scoreboard podium. Paul’s -9 for the day places him on the 2nd place at the scoreboard after round 1.

Experience shows on The Beast

McBeth and Barsby will be joined on tomorrow’s lead card by European Open veterans Karl-Johan Nybo and Nate Doss. KJ’s strong routine and and well thought-out game plan made a difference on the tight fairways today, as he also almost was able to keep his scorecard bogey-free. Only the treacherous and OB-ridden hole 11 yielded a bogey for KJ today, after going OB with his tee shot. Doss on the other hand, was able to card an impressive 10 birdies today, but his bogey on the 4th and double bogey on the 15th kept him from being right at Barsby’s heels after the first round.

One of the highlights today was Norwegian up-and-comer Øyvind Jarnes. The 21-year-old Langevåg native probably wouldn’t had believed he’ll be the first guy on the chase card on round 2 if someone had asked him that after the first 4 holes. Øyvind started his round with a pair of pars and a bogey after the first 3, putting him 1 over as he dropped his scorecard on the first scoring station. It took until hole 5 for the young Norwegian to kick his game into gear and after that there was no looking back. Jarnes ended up shooting the rest of the round bogey free with 7 birdies, resulting in 7 under for the day, same as to top Finnish player, 22 year-old Mikael Häme. This ties the duo with Nybo and Doss, but places them on the chase card due to their higher PDGA number, as stated on the DGWT rules.

Recap on the Round 1 action!

Video: Simon Lizotte starts his round on hole 1.

During the first round of European Open, our social media team was following mostly the Open division feature card. As a result, you can find a lot of photo updates, as well as hole-specific play-by-play videos on our Instagram account. Make sure to check them out here!

We also have The SpinTV production crew piecing together play-by-play tournament coverage videos from the feature card’s final round, to be released early next week. You can always find all of our official videos here and check out our Facebook live recap show from after round 1 below: