ROCK HILL, SC -- There is almost no where one can turn these days where media does not play a role in their personal or professional life. A combination of more affordable production cameras, video streaming, and software combined with the burgeoning number of distribution outlets for this content has certainly congealed in the disc golf world, where we now often find dozens of media production personnel on the course scrambling for access to the players and their performance during competitions. With growing rumbles for the need to manage the sometimes distracting and unwieldy activity of photographers and videographers on the course, the 2014 United States Disc Golf Championship, in cooperation with the Professional Disc Golf Association and Terra Firma Media Group, is launching a pilot program to credential the various media personnel who want to work at the historic Winthrop Gold disc golf course during this year’s championship.

“We have never enjoyed more coverage of disc golf than we have today,” said Jonathan Poole #7505, Tournament Director for the USDGC. “This is a very positive development in our sport, but one that needs to be managed, as we find more and more people with cameras and recording devices finding their way onto the course and mingling with our players.”

To address the growing demand of media outlets who want to cover disc golf, this year’s USDGC will adopt a pilot program to study a two-tiered system of credentialing media personnel who are reporting on the event. Using a proposal that was developed by Dr. John G. Duesler, Jr.#12789, Principal of Terra Firma Media Group and a long-time media production partner in disc golf, the United States Disc Golf Championship saw this as an opportunity to continue its mission to use the tournament as a platform for developing new and innovative ways to grow and advance disc golf.

“The Championship has been on the forefront of advancing disc golf for a number of years now,” smiled Duesler. “From its inception and making the tournament only accessible to those who qualified, to the position of ropes on the course to denote out of bounds, to the recently adopted Performance Division, the USDGC has been a place where disc golf innovations have long been tested. With the support of the organizers and the PDGA, we view this credentialing pilot program as a first step in seeing if managing the media personnel on the course during the competition can find a balance in providing as much access as our media agents need, but in a way that does not interfere or distract our disc golfers who are competing for this prestigious title.” 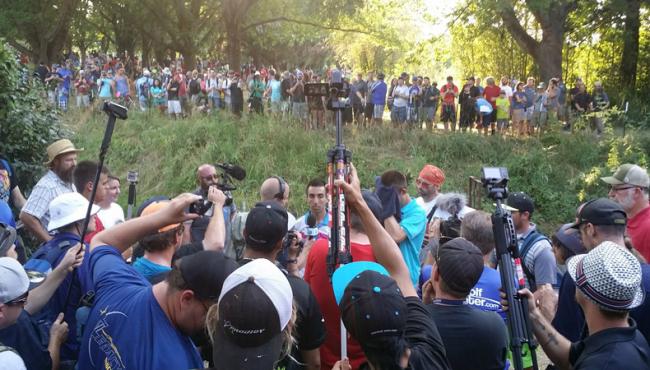 The principle for the two-tiered credentialing system is based on the PGA Tour’s method of prioritizing who is allowed in the fairways and who must stand to the side. Duesler’s proposal consists of seven priority levels ranging from the live or TV broadcasting, at the highest level, down to the casual fan who is taking pictures or Instagramming with their smartphone. The awarding of credentials will be based on how the media is being distributed, which provides an objective measure for granting access either inside the USDGC ropes or outside them.

“The USDGC is a tremendous gathering of friends and the disc golf family,” Poole said. “So we had to introduce a way to determine who could be on the fairways and who could not that did not offend friends of The Championship. We believe that the Terra Firma proposal is a great start for objectively determining the degree of access our friends and other media outlets require during the competition. With the support of the PDGA, we will see how this pilot program works at finding that balance between the growing demands of media and providing our friends the access they need.”