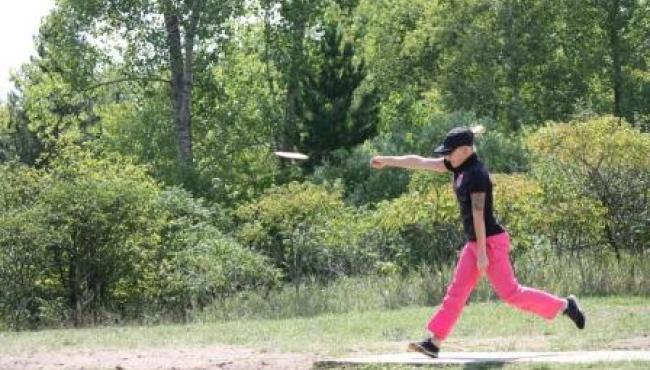 The 2012 CCR Open (August 10 - 12) came to a close with Mother Nature finally cooperating and providing sunshine and blue skies for a nice little Sunday in Mid-Michigan! The tournament registration was lower than expected due in part to the wicked weather hovering around the first 2 days but 130 brave souls withstood the elements and contributed to a fantastic event. The layout for the tournament included both courses at Burchfield in Holt and a new 24 hole layout at Grand Woods in Lansing. Both courses received glowing praise from professionals and amateurs alike with Rivers Edge at Burchfield (completed earlier this summer) receiving the highest of them all.

After the first day of competition, Paul Ulibarri and Catrina Allen were atop the leader-boards despite heavy competition from the Michigan professionals and they weren't going anywhere until the job was done. The final round open men's card consisted of Ulibarri, Ziggy Bierekoven, Kevin Baldwin and Kevin Tomasaitis. After the dust settled, Ulibarri beat the next closest challenger by 5 strokes to be crowned 2012 CCR Open men's champion and 2-time winner of the event. Catrina Allen held off local pro Jayne Snider to win the open women's division.

Matt Rinker, President of the CCR, honored founding members DJ, JBird, and Keith Aten with lifetime bag tags for all of their work on behalf of the club and disc golf in Michigan. The club recognized all of the sponsors and volunteers who helped put together the event noting that, "without the support from Jeremy and Steve-O from Dynamic Discs, Jay and Keith from JBird Discs, DJ Discs, Priority Auto Body, H2O and CCR member Matt Mooney at Ace Graphics and Signs we would have never been able to add $3000.00 to the pro payouts!" Vibram was also recognized for making the CCR Open a qualifier and adding that extra boost to the event.

After the last bit of funny money was spent, and all of the banners were taken down, in the field about to tee off on hole 1 at Grand Woods were six CCR members that all played in the tournament. Many of us shook our heads in disbelief that they still had something left in the tank after such an action packed weekend, but that was a telling sign of the commitment and love we all have for the sport here in the Lansing area. A personal thanks goes out to all of our club members, friends and administrators from other clubs across the state. It's always a pleasure to spend time with good people. We hope that our guests felt the same way and come back to see us again soon!

Written by Jeff Dutka (#44391), Co-VP of the Capital City Renegades