Brinster on Top of Open Flight

Brinster on Top of Open Flight 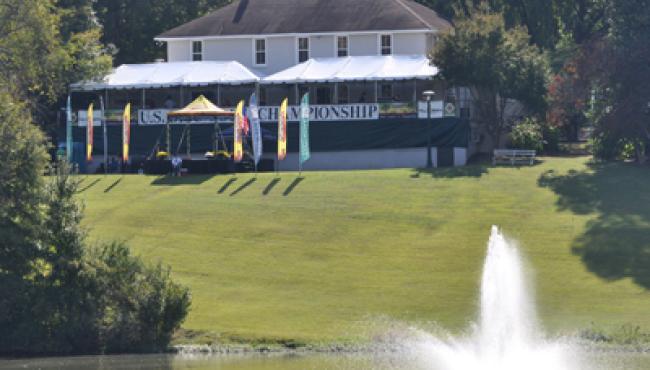 With World Champ Paul McBeth and defending US Champ Will Schusterick having a lukewarm first round, New Yorker Steve Brinster took advantage and now sits atop of the USDGC’s leader board. Not far behind him is 3-time US Champ Barry Schultz.

Throwing no bogeys, Brinster birdied seven of the front nine holes and maintained control for the duration. Known to be one of the Northeast’s best, this year Brinster, of Warwick, N.Y., has had three top ten finishes at National Tour Events and an 8th place World Championship finish. His last two appearances at Winthrop, Brinster has finished 5th and 3rd.

Schultz came out firing on Wednesday and was pleased with the result.

“I made some mistakes early on in the round but I stayed positive and kept my composure,” said Schultz.

Schultz gave everyone watching a treat when he threw-in a birdie from his knee on hole 7 after he landed a few feet outside the bamboo wall’s gap. Schultz said he actually practices that horseshoe type throw during his warm-up routine.

“It was a nice little five minutes,” he said of the putt and the hearty applause he received from the visiting school children taking in the event.

Despite shooting a 62 (-5), defending champ Will Schusterick of Nashville was not at all pleased with his round. He said he wasn’t quite sure what was holding him back and when he was asked what he’d do to come back in round two he replied, “Anything is better.”

Shooting the same score, McBeth of Clearwater, Fla., had two bogeys and a double bogey to finish the round. Watch for them to pick it up later this week.

Grouped together with Schusterick, Brian Schweberger, of Tarboro, N.C., was quite pleased with his 64 (-3), which was one stroke better than his best round during Monday Qualifying. Like Monday, Hole 17 tripped him up and he scored a double bogey. Besides hole 17, he said he’d like to keep doing what’s he’s doing for round two.

“I wouldn’t be upset with a round like today,” said Schweberger, adding “It’s hard to get good solid rounds out here every time.”

After the round 5-time US Champ Ken Climo, who shot 64 (-3), said his seesaw round had many narrow misses.

“I had the birdie count (8), I just had a few too many small mistakes,” said Climo.
Both Climo and Schultz felt mostly positive about the OB changes after the first round. Climo said it’s better to see players having to shoot “in-between” shots after crossing OB instead of re-teeing, which is what would often happen during the years with stroke and distance penalties.

“That’s part of golf. You’ve got to play these shots that you don’t practice,” said Climo.

The Open Flight will take the earlier tee times again on Thursday and it’s a safe bet that all of the big guns will reload to try to shoot the next hot round.  Be sure to check into usdgc.com and pdga.com for updates and live scoring.  Photos can be seen on Flickr.com.