We’re halfway through the 2017 European Open here at Nokia, Finland and boy what a day it was today at the Beast! The Finnish disc golf fans came to see their favourite players in great numbers. Today we saw an estimated 600-800 people following the top cards on the course. The crowd and the players were also blessed with a great scoring weather, as the wind was down and we got to enjoy sunny skies for the best part of the day.

Cat and mice play on the FPO lead

Catrina Allen started the the day in the lead.

Round 2 kicked off with a dramatic start on hole #1, as Henna Blomroos (FIN) was the only player on the lead card to hit the green off the tee, converting the birdie chance. This instantly moved her from 3rd to tied for first, as Eveliina Salonen (FIN) 3’d and Catrina Allen (USA) bogeyed the opening hole. On hole 2, Catrina restored order, with the lone birdie on the long par 3. For the next 8 holes, this Cat and Finnish mice game continued; Catrina staying literally just 1 stroke ahead of the two Finns who kept leap-frogging each other for second place. It wasn’t until Catrina scored a birdie on the 203m long hole #10 that she finally managed to take, and keep, a bit of distance, from Henna and Eveliina. Tomorrow, Catrina will defend a 3 stroke advantage over the two Finns, and they in turn have a 6 stroke gap to fourth. 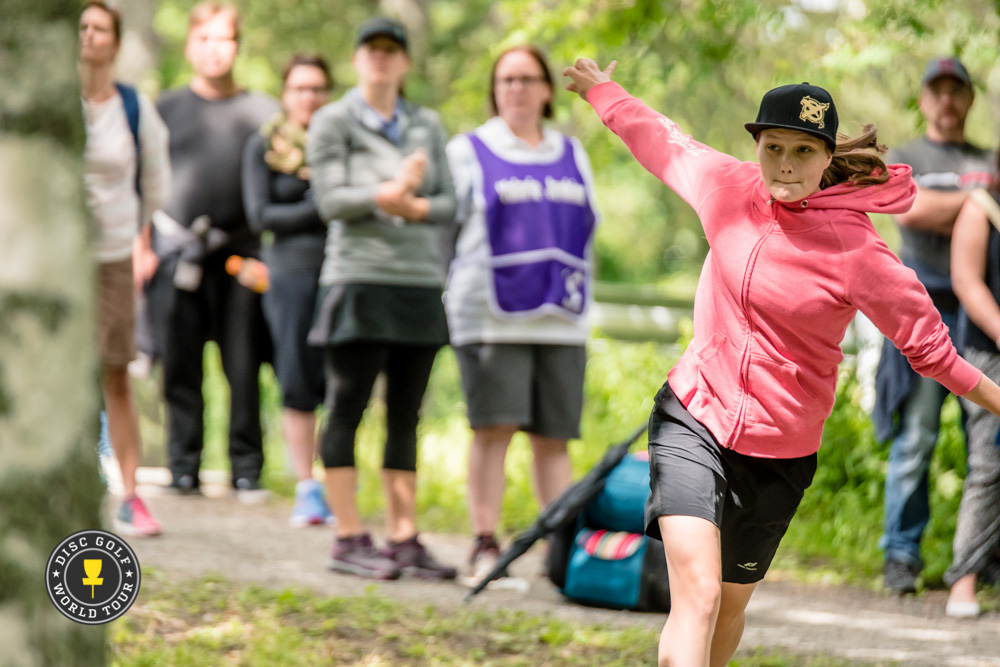 From hole 11 on, the fight for 4th place got really fierce. Until then, Valarie Jenkins (USA) had managed to stay in the wake of the top 3 players, but as Val carded 3 bogeys in a row from 11 to 13, the door was opened for the chase card players to inch their way forward towards the fourth spot, or better. Kristin Tattar (EST) and Hannele Määttä (FIN) both played a solid +8 round, and they’re now within arm’s length of Valarie. Katka Bodova (SVK) played a good round, but her double OB quad bogey on hole 3 took the wind form her sails, leaving her on the 7th place, 12 shots behind Catrina going into moving day.

Barsby & McBeth battle for the top stop on the front 9

Over on the Open division, Gregg Barsby (USA) started round 1 with a 2-stroke buffer over the defending, and 3-time, European Open Champion Paul McBeth. Gregg was able to extend that lead to 3, as McBeth’s drive on hole 1 sailed deep, resulting in a par over Barsby’s birdie on the first hole. The par 5 hole 3 however brought a bit of a momentum shift to the lead card, as Paul’s birdie allowed him to move to just one shot from Gregg, who hit early branches on his 2 first shots and was forced to take a bogey on the on the long and challenging 3rd hole.

For the next few holes Barsby and McBeth went back and forth from 1 to 2 stroke difference up until the last hole of the front 9, where Barsby turned a birdie opportunity from just inside the circle to a bogey while McBeth nailed his putt from similar distance to convert the birdie and tie the lead.

Barsby shoots lights out on the Back 9

On the back 9 though, Barsby was simply unstoppable today. From hole 10 until 14, Barsby hit back-to-back birdies, all of which came from inside the circle and most of which within 5 meters or so from the basket. It’s safe to say that Gregg’s drives and approaches were on point today. The only mishap on the back 9 came on the downhill par 4 hole 15, where his drive slipped off his hand early and was luckily stopped by a tree before going ob. After this Gregg regrouped and played a smart and safe par, minimizing his losses after the errand tee shot.

Video: Barsby with a squeaky clean birdie on the treacherous island hole 16.

Barsby seemed to clearly be able to feed off energy to the dangerous last 4 holes from the massive gallery following the final group. The crowd went wild every time he made a birdie putt, a treat that happened on 3 of the last 4 holes. 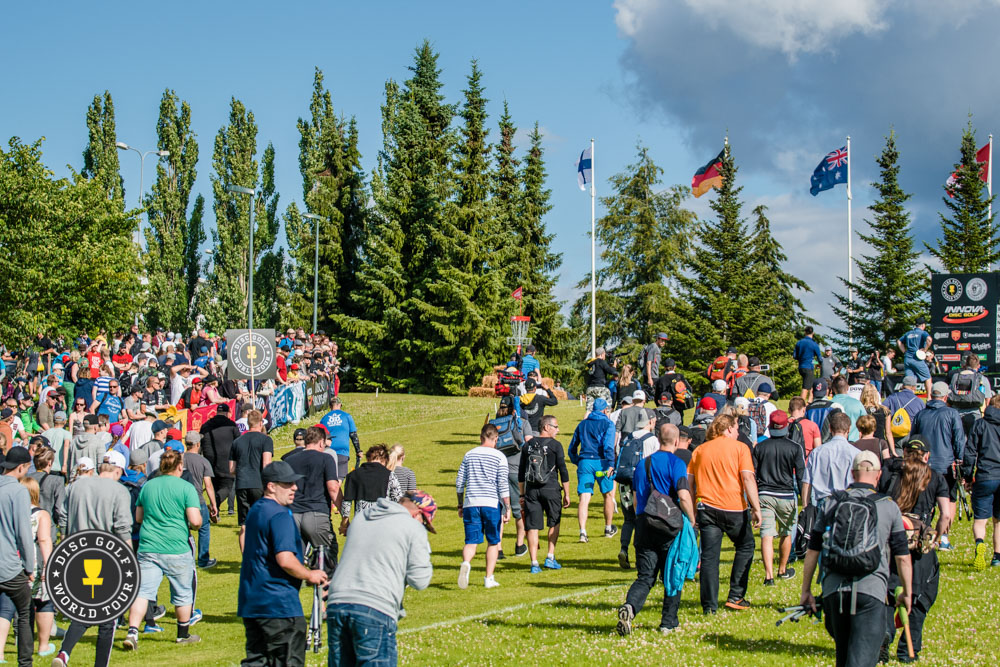 We had great gallery following the 2nd round today.

Barsby’s 8 birdies and one par on the back 9 is what really made the difference today. He finished the day at -11, same score as yesterday, but this time with 13 birdies and 2 bogeys. This places Barsby on top of the leaderboard with a fairly comfortable 6 stroke advantage over McBeth, who’s currently at -16 for the event.

Other top performers on the Open division today were Eagle McMahon (USA), Seppo Paju (FIN) and Simon Lizotte (GER). Eagle McMahon, who was at even par going into round 2 after struggling on the last 4 holes yesterday, came out of the gates guns blazing, carding 9 consecutive birdies on the first 9 holes. At this point already the tournament center was buzzing that a new course record might be in the works by the young Coloradoan. Unfortunately for Eagle though, on the stretch of holes from 10 to 14 he shot all pars, leaving the possible new course record up to the difficult and OB-ridden final 4 holes.

Video: McMahon kept his cool on the final stretch today.

Unlike yesterday, McMahon was able to finish strong today, birdieing 3 out of the final 4. This resulted in a very respectable -12 for the 2nd round which ties the course record shot by Paul McBeth and KJ Nybo in 2015. Eagle’s great round today moves him up the scoreboard from tied 51th place to the tied 6th place. Not bad for just one round! 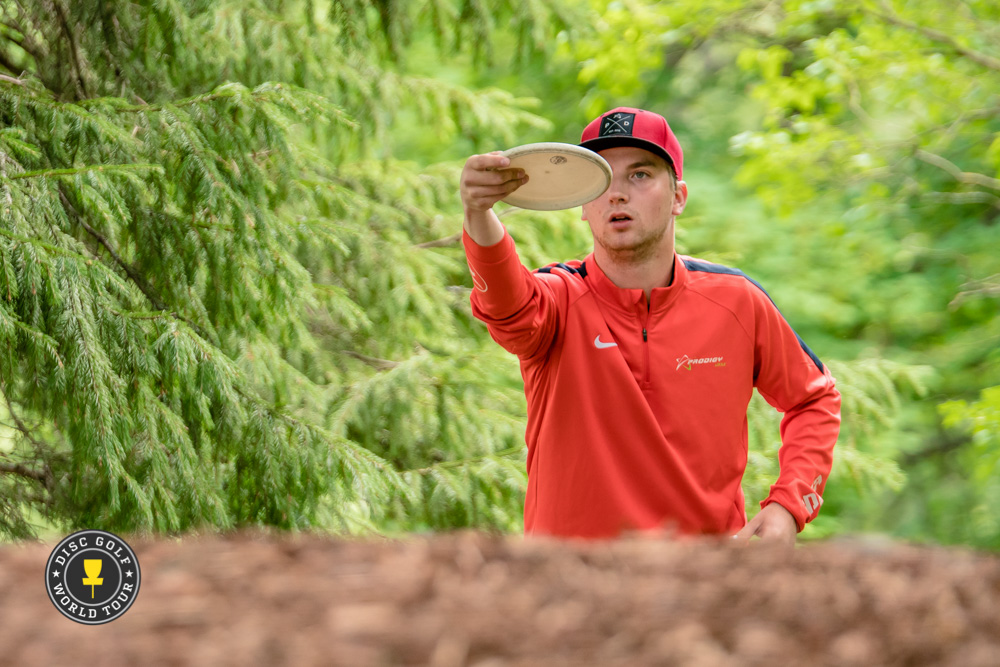 Seppo Paju, who had his own squad of fans following him during his round, also made big moves up the scoreboard today with his bogey free -10. Seppo started the day on the tied 34th spot and will be joining Nate Doss, Eagle McMahon and Mikael Häme on the tied 6th place in the chase card tomorrow. Simon Lizotte, who’s had his putting game really dialed in this week, was bogey free all the way until the very last hole. At that point Simon was at -10, a score that would have tied him on the 2nd spot with McBeth. Unfortunately for Simon, his tee shot on the 18th sailed OB and he was forced to break his bogey free stretch on the final hole of the day. Simon is currently at -15 for the tournament and will be teeing off tomorrow in the lead card on the 3rd place.

Video: Lizotte with a text book birdie on hole 15.

We will be able to witness half-american, half-european lead group on moving day, as Denmark’s very own KJ Nybo will be the 4th person on the card with the elusive 14:00 tee time. KJ’s -6 for the day was probably not exactly what the European Open veteran was shooting for, but still enough to keep him well in contention for the top spots as we move towards Championship Sunday.

2 Aces and an Eagle

The 2nd round also brought us 2 hole in ones and 1 eagle on the Beast. Markus Mäntylä (FIN) started his day the right way, as his sidearm tee shot found chains on hole 1. The other ace today was made by Devan Owens (USA) on the heavily rightwards turning hole 9. Fun fact: both of today’s aces were made by left-handed players.

On a course like the Beast, eagles tend to be a rare treat. The sole eagle of the tournament (if you don’t count the aces on par 3’s) came on the island hole 16, where Joonas Kuitunen (FIN) threw in his 2nd shot from about 90 meters. Congrats to Joonas, Devan and Markus for the great shots today!

Recap on the Round 2 action!

Video: Gregg Barsby with a great birdie on the difficult par 3 hole 17.

During the 2nd round, our social media team was following mostly the 2 top cards of Open division. As a result, you can find a lot of photo updates, as well as hole-specific play-by-play videos on our instagram account. Make sure to check them out here!

We also have The SpinTV production crew piecing together play-by-play tournament coverage videos from the lead card’s 2nd round, to be released sometime tomorrow. If you haven’t already, make sure to check out the feature card’s 1st round coverage by The Spin TV here and here! You can always find all of our official videos here and check out our facebook live recap show from after round 2 below:

Round 2 Live Recap Show from the 2017 European Open with interviews with Simon Lizotte and Gregg Barsby!

We also highly recommend checking out the leaderboard and Metrix and course stats from the final round. The new feature we added last year, player- and hole-specific Instagram videos on the scoring interface, is in place here at the European Open too, so make sure to check those out by clicking the tiny camera icons where available.

Find the PDGA results page with preliminary round ratings here!

There’s still plenty of action to come, so make sure to check back often as the week progresses!