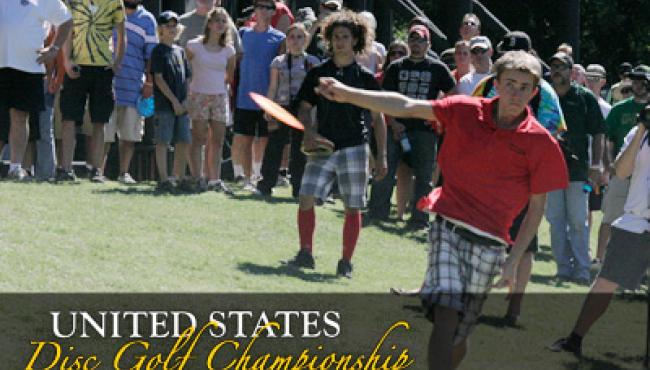 Dustin Perry Turns Heads in ATL as top qualifier
A relative unknown disc golfer, Dustin Perry, made the disc golf world take notice after he took three-time US Champion Barry Schultz to the edge at the Remax Atlanta Open, and in the process wound up on top of the DGU Performance Leaderboard. Perry, 24, of Rome, Ga., not only beat his projected score at the April 16th-17th tourney, he slapped it around. Overall he finished 21 strokes below his projected, with 11 of those strokes coming in the second round when he tied the course record with a 1079-rated round under heavy winds. Look below to see how 2011 USDGC qualifying works.

Qualifying Method Explained:
The 10 disc golfers with the best "Performance" from each regional qualifying tournament receive invites to the 2011 USDGC this October. During regional qualifiers, each player with a PDGA rating of 850 or higher who plays the same course layout as the open division is eligible for USDGC qualifying. Eligible players receive projected scores for each round through a combination of their player rating and the course's layout. After each round, players are ranked regardless of division according to how their projected score and actual score compare. For a full listing of qualifier events and Performance Leaderboard results, visit the Regional Qualifying Results page.

This year the US Championship is all about playing your best personal disc golf, and according to USDGC Event Director Jonathan Poole, that's just what Perry did at the Atlanta Open. “Dustin essentially came out of nowhere and put on an outstanding show. He played well the entire way and his second round, in a steady and howling wind, was nearly flawless. The performance format is geared to reward performances like that.” said Poole, who attended the event. Until the Atlanta Open, the 988-rated Perry had never played an A-tier event as a professional. But he must have felt right at home because going into the last round he had a six stroke lead over a field that included Schultz, Dave Feldberg, and Ken Climo – three of the game's best ever. Just who was this Dustin Perry must have been the most frequently asked question during the tourney.

However, by the time the last hole at the Fly Boy Aviation Course was over, Schultz, a two-time World Champion, had managed to tie it up. It was still tied going into the second playoff hole when Schultz, teeing off first, drove the 300-foot downhill hole no. 2 to within 12 feet of the basket. Perry, who has never birdied the hole, must have felt the magic slipping away at that point and later admitted muttering to himself at the time, “Oh great. No pressure.”

Perry couldn't match Schultz's near perfect drive and had to settle for second place, but he ended up stealing the show with his surprise performance. To Dustin, though, his heady play was no surprise. Since picking up the game in 2008 as a way to keep competing after his football years, Perry has swiftly molded his game to compete within any division. Beginning at the bottom, it didn't take long before he was dominating in the PDGA recreational division. In 2009 he won the 93-player strong rec. division at the Amateur Championships at Bowling Green, shooting a 990-rated round two. Not bad for a rec. player. Later that year he moved up to advanced and won a Georgia c-tier event. Last year he started playing pro predominantly and his success has continued. He won the b-tier Belch'n Turkey VIII in Chatanooga and the c-tier Tennessee Open in Athens. And before this year's Atlanta Open he had tied for second at three c-tiers in Alabama, one of which he was also bested by Schultz. His fast track to success hasn't been any accident. Perry attributes it to finding the right techniques then practicing like crazy. “I've always been told if you've got the work ethic things will work out,” the full time student said.

In the past, that strategy has worked in everything Perry set his mind to; be it football, track and field, or school. And, it naturally transferred to disc golf as well. Looking to develop solid disc golf fundamentals early in the game, Perry studied those that had mastered disc golf like Georgia great Phil Arthur and others in order to mimic their style. Then came his discipline to practice, which seems to be Perry's specialty. Just like when he practiced football for several hours a day at Shorter University near Rome, he now puts those same man hours in disc golf. One of his best tools is a nearby course with 10 not-so serious holes that's otherwise seldom played. However, it becomes very useful practice to Perry when he creates safari holes based on tough shots from tournaments he's attended. He says he's constantly adjusting his improvised brick tee pads in order to master shots he's struggling with. A day after the Atlanta Open, that's exactly where he was, practicing the same shots that had failed him during the tournament. He hopes he can fix all of those shots by October for his first Championship experience as a competitor. Regardless of the USDGC's format this year, he wants the win.

“At the end of the day someone's gonna get the ring. You don't get the ring anywhere else,” said Perry. Perry is ready for some big wins in disc golf. Despite his small college football team winning their conference one season, his sports career has seen several heartbreaking near-misses. In high school, his football team lost the state championship with 19 seconds left in the game. Then, Perry lost the state championship in the long jump by mere inches. “That's why disc golf has got to get it done for me at this point,” Perry said with a laugh. Although he doesn't plan on making a living at disc golf (he wants to work in the medical industry after graduation), he believes he can hang with anybody. He certainly showed it at the Atlanta Open. Who knew that just a few short years after watching an instructional DVD featuring world champions Ken Climo and Dave Feldberg, that he would end up beating them at the Atlanta Open?

Glass Blown Open Sends 3 Women to the USDGC
Three USDGC qualifying spots were awarded to women including three-time world champion Valarie Jenkins after stellar play at the Dynamic Discs Glass Blown Open April 16th-17th. The three round A-tier event in Emporia, Kansas was host to some 354 disc golfers and the USDGC's Region 6 qualifier, which includes Kansas, Missouri, Nebraska, Iowa, Minnesota, South Dakota, and North Dakota. 884-rated pro Catrina Allen of Arizona led the ladies after shooting six strokes below her projected score for the tournament. Jenkins of California and Sarah Hokom of North Carolina, who finished first and second place respectively in the women's pro division, both ended up shooting five below their projected scores. Jenkins, who had a 1013-rated first round, is no stranger to the Championship. This will most likely be her fifth year to attend. Hokom said she'll probably be there as well. Although it would be her first time to play in the USDGC, she's already familiarized herself with Winthrop Gold. Last year she caddied for Geoff Bennett, and after moving to Charlotte she's been playing the course fairly regularly.

Hokom said she's looking forward to all of the energy that surrounds The Championship and hopes to see that again this year. “It'll be cool. It's exciting to be a part of it,” said Hokom, who felt her Glass Blown Open play was pretty solid. She said she's a little worried about the stroke and distance penalties, which are again in play this year, but she has confidence more practice will steer her in the right direction. On the men's side, 976-rated Robbie Bratten of Texas and 969-rated Tracy Ruder of Kansas were on top of the DGU Leaderboard when they beat their projected score by 10 strokes for the tournament. Also making the grade were: Steve Mills (-9), Chris Greenleaf (-7), Brian Miller (-7), Marshal Wolfe (-6), Michael Austin (-5), Aaron Martin (-5), Mike Robinson (-5), and George Smith at (-5). For this tourney only pro's played well enough to qualify.

The Glass Blown Open drew a lot of talent as usual. Nine members of the men's pro open field including former USDGC champs Nate Doss and Nikko Locastro and current world champion Eric McCabe were already pre-qualified for The Championship. Region 8's qualifier comes next at the People's Championship on May 15th-16th in Lehigh Valley, Penn. The region encompasses most of the Northeast. For more details visit USDGC.com