John Houck's current article in discgolfer magazine clarified that we're really talking about "risk versus reward" instead of the more common phrase "risk and reward" in course design. In a similar way, disc golf is "players versus courses" where course designers serve as proxies to try and make sure their courses challenge players.

Disc golf at its core is players against the course, not directly against each other. Player ratings are based on your score versus each course you play in competition, regardless whether you finish first or last in your division. Course designers like Harold Duvall and Stan McDaniel pictured above can be conflicted. They can use their wicked design chops to make each hole as brutally tough as possible. But most designers are active players and want you to enjoy their course design or at least feel it's fair overall. These competing goals are the narrow tightrope designers willingly must traverse.

Unfortunately, making all holes immensely Challenging and awesomely Fun is impossible and likely not even desirable to produce a well balanced course. Complicating it even further, consider that the same hole can be seen and play differently depending on a player's current skill level. Try to think of these three factors in 3D space as shown in this Designers Dilemma diagram. 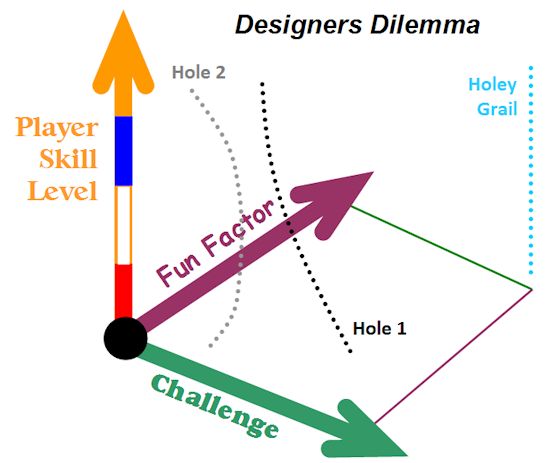 Each dotted line indicates how the same hole might be seen by players at different skill levels moving from red level up to gold. The "Holey Grail" dotted blue line out to the right is a "perfect" hole that has maximum challenge and fun factor for every skill level. Holes that might get close to this ideal are probably downhill, short enough to be reached by most skill levels, have some tricky elements such as well positioned trees, and likely some OB. Even then, it's tough to tweak these holes so it's challenging enough (not fluky) for the top gold level and not too challenging for rec players.

Let's go out on a pretty sturdy limb regarding human nature and how we approach challenges, in this case, tackling a course. Competitors strive in varying degrees to develop mastery in their sport and discover their competitive edges. Many are open to learning and even creating tricks, discovering legal angles, developing creative ways to do things that the rules may not have addressed (yet), and some will even bend the rules to gain an edge over competitors. In disc golf, our goal is to "defeat" the course.

Examples of disc golf advances over its 40+ year history that have been developed to either enhance or tame the competitive edges of players and disc golf courses are:

Some of these rules additions were done to either counter an innovation or behavior that perhaps might produce too much of an edge or to embrace and manage that innovation so everyone had the option to take advantage of it. In some cases, an advance or innovation might initially be considered "cheating" within the current environment until it was either sanctioned as a legitimate option or was formally made illegal via updated rules.

From a player perspective, both innovations and new rule restrictions are more likely to threaten a player's current level of mastery requiring more effort on their part to continue. These general human resistances both to change and restricting behavior are deep-rooted survival instincts and can produce a negative reaction unless an innovation is far and away a clear improvement. 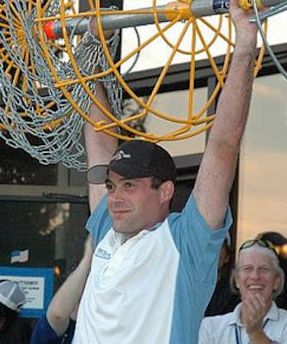 While designers seek mastery of their craft on how to design courses, the designer mastery we're interested in here is their specific efforts to challenge, even undermine, the mastery players try to achieve on their courses. The struggle between players' desire for mastery and designers to challenge mastery has produced some behaviors, perspectives, opinions and Discussion Board tension across the sport, some which you may recognize here:

The examples above show that most of us, as players, desire to master aspects of our game from rec to championship rounds. But your mastery may plateau in terms of skills, types of throws, local routes, tricks and "insider" edges. Try to be more open-minded toward future innovations and changes whether equipment, rules, holes or competition formats that may at least temporarily challenge your mastery with the potential to enhance it in the long run.

As a designer, your mission is to challenge every player's mastery at some level, especially raising the bar with future redesigns as the game advances - not out of malice - but in the spirit of competition. But look for ways to also make your designs as fun as possible for as many as possible. Tame your inner evil designer (except for the USDGC) so players at each level at least have a chance to try and master your designs.

As we wrap this tournament year with a bow, hopefully this story provided some understanding of the sometimes conflicting goals driving players and designers who are simply striving to make this sport of ours even better in the new year. Here's to a great 2014.

These guys are the leading edge of current course design, but there's so much to consider!

This concept is achieved with great success at courses like Tyler, with its relatively open woods fairways and 3 pin positions consistently being rotated, and also Iron Hill, with 4 permanent layouts, the hardest designed to make par a 1000 rated round and the shorter layouts making for a fair but semi-challenging experience for lower level Ams.