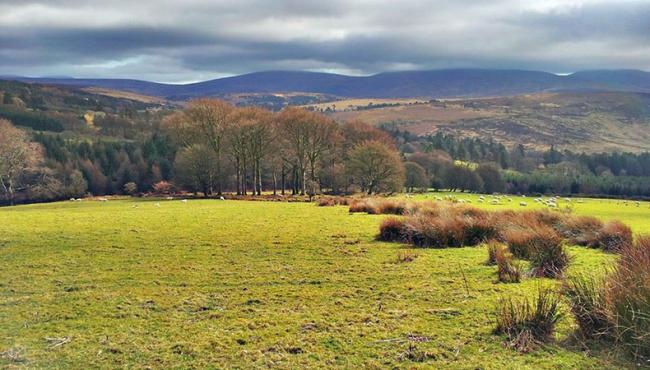 My good friend Ken Jarvis #14118, and I, David Moore #24306, are an American living in Ireland and Irishman living in America, respectively. We have a shared dream of introducing disc golf into Ireland. We joined forces after I stumbled across Ken's Facebook page, Disc Golf Ireland, and together we started to actively look for ways of promoting the sport and ultimately raise enough money to build the first course in the Republic of Ireland.

When I first started playing disc golf about ten years ago, I had this dream, and actively pursued promoting the idea in Ireland. I traveled to Ireland a few times over a two year period and had meetings with many different people from parks departments, city councils, county councils, forestry departments, the Irish Sports Council and finally a representative from the Minister of Sport. There was a lot of interest but the dream ultimately failed because I was looking to secure both suitable land and funding for the course and nobody was willing to take such a risk.

Years later, I found the Disc Golf Ireland Facebook page and saw that there was a kindred spirit championing the sport of disc golf in Ireland and I contacted the page’s admin. Ken used to play disc golf professionally in the USA and was well known as one of the longest arms in the sport. He has an unparalleled passion for the disc golf but his love for an Irishwoman tipped the balance which is why he ended up in the only English speaking country in the world without a disc golf course.

He has a car full of discs and a full size approved target and has been championing disc golf in Ireland for the past few years, traveling around the country, setting up the basket and introducing the sport to as many people as possible. Connections would be made through his Facebook page and meetings would be set up.

Initially, when I contacted Ken, I offered any help I could from my failed past experiences of trying to introduce the sport. This quickly renewed my motivation and together we hatched a plan. We figured if we could raise the capital to pay for a course it would be infinitely easier to find a suitable location. Without a club or even a player base this became a daunting process. How do you raise money for a sport that nobody in the country plays or even knows about?

We decided to promote the sport through the Disc Golf Ireland Facebook page. It was both a way we could introduce the uninitiated to disc golf as well as a forum for supporters to show any possible investors/visionaries how much interest there is in building a course. With fantastic photographs of "dream holes" to instructional tidbits from Ken, the interest soared and the page quickly grew to over 2000 likes.

My attention was then brought to the Marco Polo Grant offered by the Professional Disc Golf Association. The Marco Polo Grant was created specifically to promote the introduction and growth of disc golf into new countries. I applied for this at the same time that Ken was looking for alternate sponsorship. Through some old connections, he got a few pledges that started us off on the right track and after a few months and a re-write or two, the PDGA generously accepted our application. We are honored to have been entrusted with this $5000 grant and have pledged to build the best possible course we can.

In order to do this right, we are committed to not only finding a location and building a course but also to actively promote the sport by exposing as many people to it as possible. Ken, being the unbelievable ambassador that he is, has since taken the promotion of disc golf in Ireland to the next level. He’s already put on three very successful demonstrations, introducing over 1000 people to disc golf.

The first thing we did was to have "Disc Golf Ireland" join forces with the Irish Flying Disc Association (IFDA), an established Irish sporting organization who run the successful, and very popular, National Ultimate League. They have agreed to also represent disc golf on a national level in Ireland and are also committed to growing awareness and promotion for disc golf.

The first public demonstration was on March 22, 2014, at an Ultimate meet held by Trinity Ultimate (one of Ireland's oldest and most respected universities) at Santry Park in Dublin. Between the 10 men’s teams and the 8 women’s teams, there were about 200 players in total. It was an all-day event, and the disc golf demonstration was held for two hours during the lunch break. About 50 participants were obviously hooked as Ken showed them different grips and the distinctions between a golf throw and an ultimate throw. They all got to try out these techniques.

What Ken found was that these players, already being flying disc enthusiasts, were immediately quite adept at putting but found their driving would need a little practice! A good time was had by all, but in true to Irish form, the demonstration started with beautiful blue skies and ended with a torrential downpour, which may have kept some of the other 150 people players away.

The second and third demonstrations were held on April 20th, 2014. This was quite the promotion as it was a well-advertised annual Easter family treasure hunt. For the past three years the city of Dublin has put on this event. Coincidentally, the company contracted to organize the event is Kippure Estate which is an established adventure center and is one possible location that we have been considering as a location for Ireland's first course. Being that they are familiar with Ken and our dream to promote disc golf, they asked if they could add a "disc golf challenge" as the final activity in the hunt.

Unlike the weather in March, this day turned out to be warm and sunny, with both events completely booked. The first event was from 11:00 AM – 1:00 PM at Griffeen Valley Park in County Dublin. It was attended by 450 people, the majority of which were children. The turnout was so big that two staff members of the adventure center had to help Ken with the challenge.

After cordoning off danger zones, three lines were formed (distance from the basket depended on the age of the participant.....15', 20' and 25') and every treasure hunt participant got to throw three discs at the basket. There was a three meter "green" marked off and every child who got a disc onto the green was entered into a drawing to win a half day's activities at Kippure Lodge and adventure center. Every child made the green so they all felt like winners and those who made the basket got spot prizes such as chocolate eggs.

The same format was employed later in the day, from 2:00 PM – 4:00 PM at Corkagh Park (also in County Dublin) where there was an even larger turnout of 600 people! There were a lot of happy faces and on a single day we exposed over 1000 people to the joys of disc golf!

More exhibitions and demonstrations are in the works and I will be happy to keep you all updated to our progress in the coming months. If you are interested in hearing more, please like our Disc Golf Ireland Facebook page. If you would like to donate towards Ireland's first disc golf course please head over to our GoFundMe page!