Pierce Adds a Major Title To An Already Incredible Year 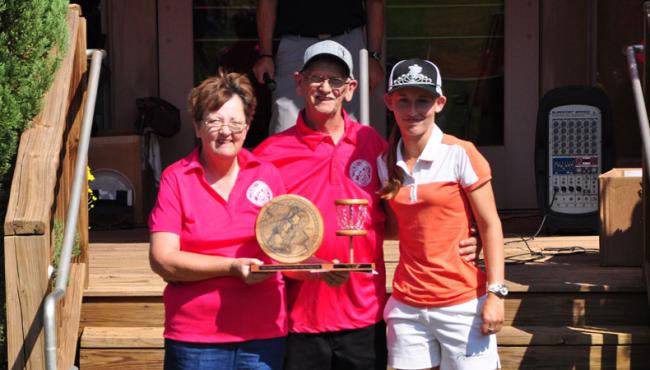 The 2014 United States Women’s Disc Golf Championship has officially come to an end and we can’t express in words how delighted we were to have been the gracious hosts of the event here at the International Disc Golf Center, as 99 women from 41 states made the journey to the IDGC to compete. After several weeks of intense preparation, we’re very proud to say that the event went off without a hitch. As an added bonus, we were blessed with the presence of Mom and Old Man Wallis all weekend, both of which came down to the IDGC all the way from Peoria, IL to run their eighth successful USWDGC.

The final day had all the divisions playing one last but critically import round. The A-Pool (Open, Grandmasters, and Advanced) would take on the W.R. Jackson course for the first time all weekend. The B-Pool would take on the Steady Ed course from the short tees, just as they did for their first round on Saturday.

If you’ve ever walked or played the W.R. Jackson course at the IDGC, and if you know anything about Paige Pierce #29190, then you probably could have predicted the outcome in the Open division today. The Jackson course is an 18-hole beast, clocking in at par 69 and 9,300 feet. Add to that the fact that not only does Pierce have the biggest arm in women’s disc golf, she’s also one of the most talented players in the world, man or woman.

When the final round started this morning, Pierce was ahead by one over 6X World Champion Elaine King #3090 with several strokes separating them both from third place and beyond. As talented as King is, there’s no way to dispute the fact that on the longer holes Pierce was going to have an advantage. However, if distance was all Pierce had to go on, she wouldn’t have won. The Jackson course is far too difficult for one aspect of disc golf to be enough to finish with a decent score.

Pierce’s ability to play well in all areas of the game is the reason she can run away with a tournament against the likes of Catrina Allen #44184, Val Jenkins #17495, Liz Carr #31068, defending USWDGC champion Sarah Hokom #34563, and many more. Her 2014 resume now includes her first ever USWDGC victory, five National Tour titles, and several A-tier wins.

Perhaps the most exciting finish of the entire tournament took place in the Advanced division. Krystin Nowicki #53699 held a comfortable lead all weekend but her struggle during the final round, also on the Jackson course, opened the doors for her competitors to make a run at the lead. By the end of the round, Nowicki would face a sudden death playoff against not one, but two different women: Allison Carlton #61493 and Jessica Hill #64874.

The playoff brought the three women back to hole 1 of the Jackson course, a par 4 dogleg left. As with most playoffs, it all came down to being able to make the high-pressure putts. After the drives and the upshots, Nowicki and Carlton were slightly outside the circle with open looks at par putts while Hill was in the same area but waiting to putt for bogey. Nowicki stepped up first from roughly 35 feet and nailed it. Carlton followed from a few feet closer, knowing a miss would mean it was over, and unfortunately her putter flew past the basket wide right. And just like that, it was over. Despite struggling in the final round, the woman that lead all weekend proved that she deserved the title.

If you read the coverage article after Friday’s round, you might remember us mentioning the leader of the 16 & Under division, Alex Lambert #49750. We said it’s a name you might as well get used to hearing, and we can now confidently back that statement up. Not only did Lambert win her division, she would have won in EVERY division in the B-Pool. Of the 52 women that made up eight different divisions in the B-Pool, no one shot a better overall score. All we can say is, WOW! We can’t wait to see what the future brings for this incredibly talented young lady.

Becoming a United States Women’s Disc Golf Champion is no small feat. It’s an accomplishment in the sport that is only rivaled by the PDGA Amateur and Professional World Championships. All 11 of the winners listed on the 2014 USWDGC results page are owed a genuine congratulations. We look forward to seeing them and all of the other women that competed this weekend on the tour in 2015!