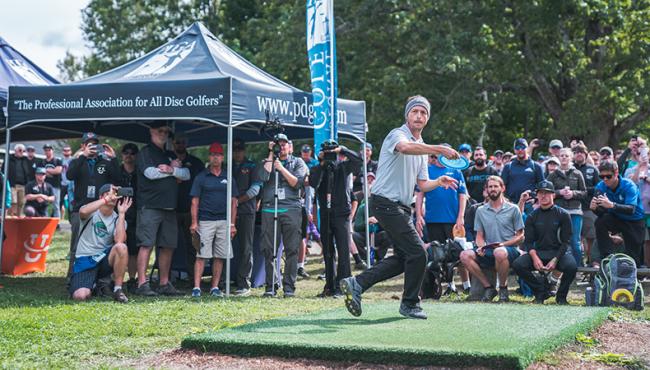 The 2018 PDGA Pro World Championships at Smugglers’ Notch Resort was certainly an event that the disc golf world will remember for a long time, and for good reason: With heated competition across all five days, two first-time world champs crowned, and a stunning setting in the Green Mountains of Vermont, there was a lot to celebrate.

Starting Friday, there’s even more to take in.

Outside TV will air an hour-long program dedicated to the 2018 PDGA Pro World Championships at 8:00 p.m. EST that has the potential to reach 60 million households. The show will feature shot-by-shot footage from each of the tournament’s five rounds, plus a behind-the-scenes look into the lives of some top competitors, including Paige Bjerkaas, Rebecca Cox, Paige Pierce, Nate Sexton, and Ricky Wysocki. It’s the first foray into disc golf for Outside TV, which is the leading video provider for the adventure sports and outdoor lifestyle category.

Check out the full schedule for the show’s run of seven broadcasts:

The production – which was executive produced by Dave Manzo of Philadelphia-based KeDa Creative and Pro Worlds Tournament Director Jeff Spring and features collaboration from Smuggs TV (the resort’s in-house production firm), Jomez Pro, and Central Coast Disc Golf – invites viewers to travel to the Green Mountain State to follow the week-long competition. While there are plenty of actions shots, the show focuses on getting to know the five featured players as they prepare for the most prestigious title in the sport. In addition to these character pieces, the broadcast also gives viewers a peek into the mountain lifestyle permeating throughout Smugglers’ Notch, including highlights the live music of the festival, Smuggs’ FallFest, that takes place during the event.

“We set our goals for this event extremely high, and that included media,” Spring said. “The PDGA stepped up to help us take things to the next level. We wanted to provide all the best coverage that disc golf fans have come to expect, and more. That meant bringing back live coverage to Worlds, providing the highest quality shot-by-shot next day videos, and producing daily recap videos of the action. On top of that, our team had a vision of creating one special effort that would help push the sport forward. After a year of planning and sifting through dozens of options, the Outside TV production rose to the top. We couldn’t be happier with the result.”

Smugglers’ and the PDGA want to thank all the partners that made the production happen as well. “Many disc golf companies stepped up to make sure this production was successful. We definitely couldn’t have found success without the support from all of our partners,” Spring said.

For those unfamiliar with Outside TV, the network delivers high-quality, compelling storylines focused on a wide variety of sports, as well as the full spectrum of the lives of those who engage in them. The network’s Emmy Award-winning content is distributed through multiple platforms, including national cable, satellite and OTT providers; OutsideTV.com; social media; and the network’s app, Outside TV Features. Outside TV’s content is broadcast in more than 100 markets.

While the broadcast is available to millions, there are sure to be some disc golf fans that miss out on these initial chances to view the show, especially those without access to Outside TV. Not to worry: After the run of seven broadcasts, the entire show will be made available through several online outlets of partners and sponsors, including the PDGA’s YouTube channel.

How can I watch this? my cable company doesnt carry this network, I cant find a free app or place to see it, where do I go to watch this disc golf coverage?

We're working on having it available on the Outside TV app, and we'll put out an announcement if we can make that a reality. Otherwise, it will be available via our YouTube channel sometime after this initial run on Outside. Thanks!

That sounds great, thank you for the reply.

Is this available to watch yet? I can't seem to find it