The 2018 PDGA Amateur Disc Golf World Championships came to a bittersweet end on Saturday afternoon in Charlotte with semifinal rounds in the morning and finals that followed shortly after for those fortunate enough to make the cut(s). Thanks to a tremendous effort by the Am Worlds staff and Charlotte’s disc golf scene in general, what is normally a hectic day for Am Worlds felt like a walk in the park, Renaissance Park to be more specific.

There are many great stories to be told from the action on Saturday including several divisions that, despite having played well over 120 holes over the last five days, still needed a nine-hole finals showdown to determine a winner. 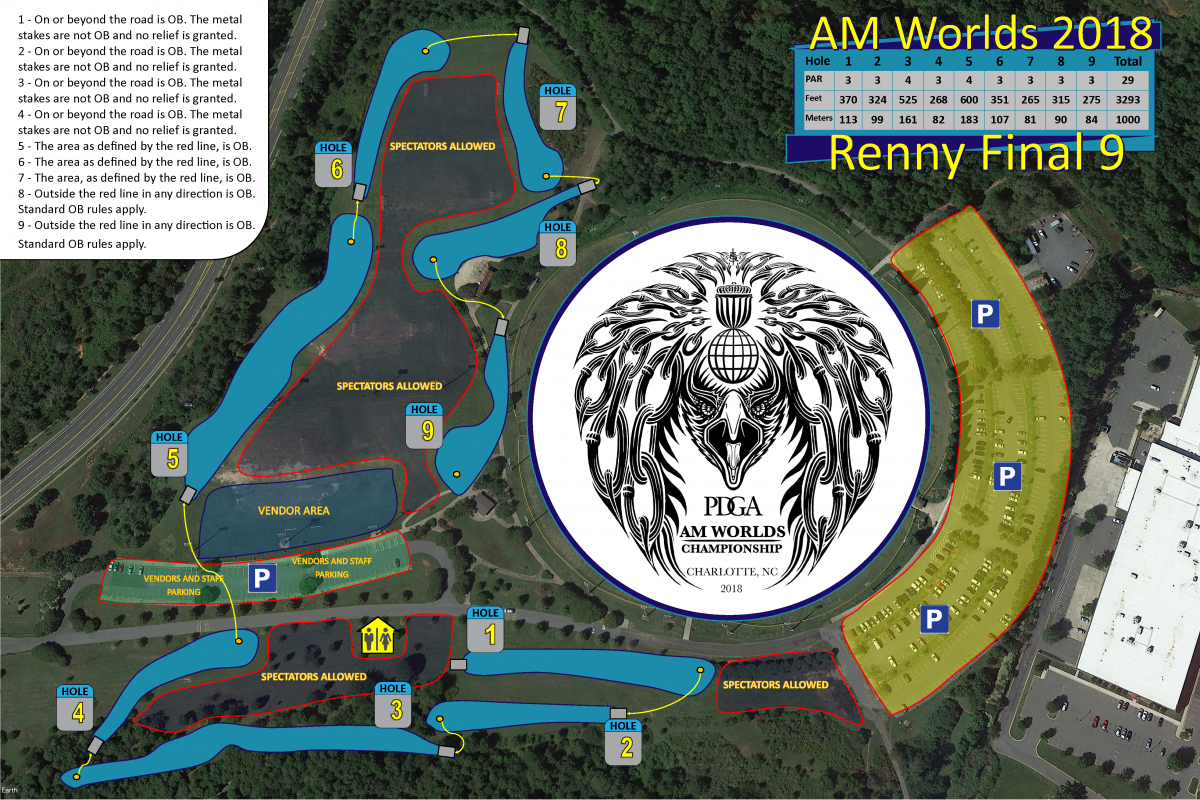 The Amateur Masters Women 60+ (FA60) and the Amateur Masters 70+ (MA70) divisions were the first two groups to take their lap around the Final 9 loop, comprised of four holes from one of the permanent holes at Renaissance plus five temporary holes installed in an area that gave vendors and spectators a way to watch multiple holes at once.

FA60’s Donna Stanley and MA70’s Donald Parker share a similar story, as their world championship titles were won without much opposition, at least by the time they reached the finals. By the time Stanley arrived at Renaissance Park she was already ahead by 13 while Parker led by eight. Both Stanley and Parker went home with their trophies with ease.

The Amateur Masters 60+ division (MA60) division was the closest four-way battle, hands down, with final scores of 411, 412, 413, and 415 at the end of the Final 9. Despite starting the finals loop two strokes behind then leader David Frazer, Mark Hauser pulled off the lone victory by shooting an even-par 29 for the finals.

The Am. Masters 50+ (MA50) and Am. Masters Women 50+ (FA50) also had some tight finishes, with Jennifer Costa edging out Caryn Shearer in a sudden-death playoff for her victory and Bill Cary holding off Jerry Dobbins in MA50 by two. MA40 and FA40 winners Mark Huether and April Gilliam left no one wondering who would be at the top of the leaderboard at the end of the finals, winning by 13 and 18, respectively.

The last of the not-so-close battles was also the last division of the day to finish, Advanced, where Luke Humphries went wire-to-wire to take down the title in Advanced  His 14-stroke victory gives him his second PDGA Major win of the year, as he and his partner also won the Amateur World Disc Golf Doubles Championships in his home state of Texas earlier in the year.

Last but not least, the much anticipated Advanced Women’s division, where Deann Donaldson, Valarie Mandujano, Alexis Mandujano, and Christine Jennings had created perhaps the most exciting back and forth set of scores all week. Despite trailing for the last three rounds to Valarie Mandujano, both Donaldson and Alexis Mandujano came into the Final 9 tied for the lead with Valarie one behind after turning in their scores from semifinals earlier that morning.

The tie wouldn’t last long, as Alexis quickly moved into the lead on the opening hole and never looked back. Playing it safe through the temporary holes on the back and avoiding bogeys, there wasn’t much any of the women could do to catch her seeing that she simply wasn’t making any of the mistakes that they were. Alexis tapped in on the last hole in front of an exciting gallery to become the Advanced Women’s world champion, edging out Donaldson by two and her older sister Valarie by three.

Congratulations to all of the 2018 PDGA Amateur Disc Golf World Champions and thank you to everyone that came out to Charlotte to compete!.