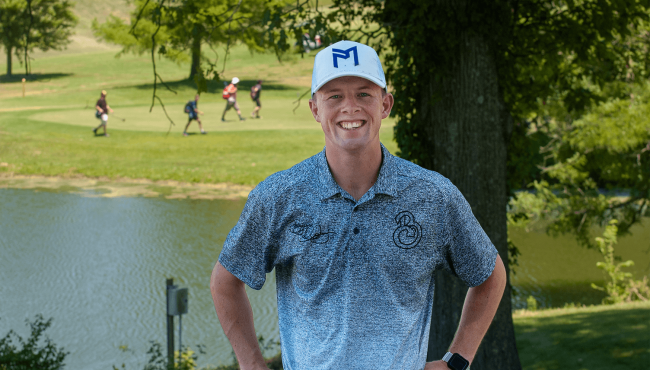 Payton Staman of Indianapolis, IN, matched the hot round of the day with bogey-free 7-under at the Princeton Country Club. Photo: Danny Voss / PDGA

It’s a marathon, not a sprint.

So says the old expression. And, with 90 holes to be played at the 2022 PDGA Amateur World Championships, the expression holds true in southern Indiana.

But, that doesn’t mean the start is not an important component in a run for a championship.

On Tuesday, a field of the best amateur disc golfers in the world faced the first round of a five round PDGA Major, taking place on multiple courses in the Evansville, Indiana area, in the steaming June, midwestern heat.

Just two divisions are represented – age-protected divisions will compete at Masters Worlds and Junior Worlds, to be held concurrently, later in July. Here, throws are tallied, not birthdays.

MA1: 335 Golfers with One Goal in Common

On day one, the larger, higher-rated “A” pool contended with the Princeton Country Club. Meanwhile, the “B” pool faced the Mesker Park Hybrid Course. For now, the leaderboard is made up of a combination of players from both pools, some of whom got to score on the “easier” of the two challenging courses. By the end of day two, all of the players will have completed the same 36 holes, and the pools will be reshuffled to position the top players into new “A” and “B” pools.

The top four through 18 holes includes two players coming off the Country Club course and two players from the Mesker Park track:

Of note, a 7-under round at the Country Club earned a 1032 rating, while 8-under at the Mesker Park Hybrid course netted a 995 rating.

After Wednesday’s second round, players and fans alike will understand exactly who’s who going into the second half of the championship. After Friday’s fourth round, the top 20% (and ties) will play a final round back at the Princeton Country Club.

FA1: Lynds Leaps into the Lead 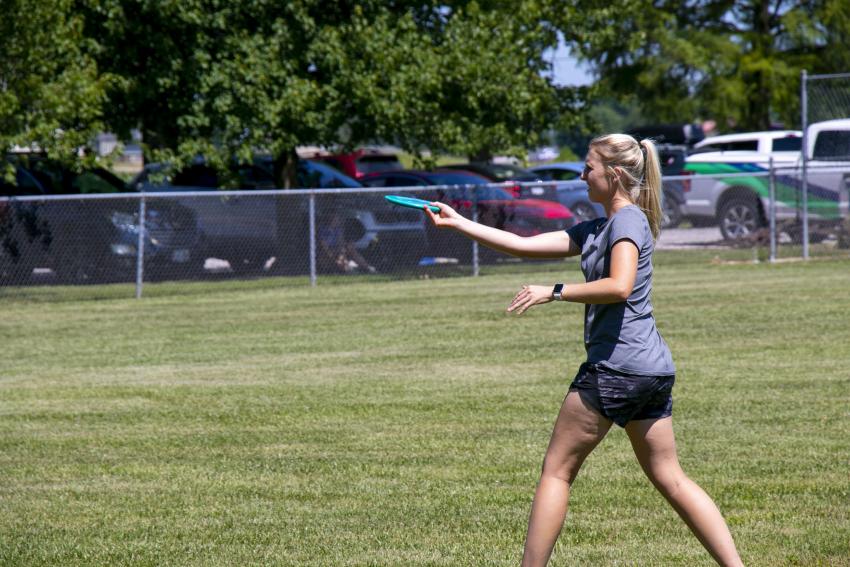 Jordan Lynds recovered from a bogey on hole 1 to shoot the hot round of the day. Photo: Jennie Weigand / PDGA

After playing for 2.5 years, twin sisters Jordan and Morgan Lynds are playing their first PDGA Major.

It's fair to say -- after finishing round 1 in first place and fourth place, respectively -- that things went pretty well for the sisters during the first time out.

After an initial bogey on hole 1, Jordan went on a tear, birdieing five of the next seven holes and ending up four-down on the front nine.

On hole 10, Jordan went OB, skipping into the creek. She made the putt to save par. But, hopping from rock to rock, a young spotter, Alexa Parkerson, played the hero as she retrieved the lost disc.

Once again Jordan found herself OB, just barely onto the rocks on hole 12, but was able to save par from the drop zone.

She would go on to finish bogey-free on the back nine, and five-down for the round, one ahead of Hannah Lengel of Winona Lake, IN.

From the feature card, María Eldey Kristínardóttir of Reykjavík, Iceland, was toward the top of the leaderboard most of the round until an early tree on hole 15 and then another tree on that same hole resulted in a double bogey.

On 17 Kristínardóttir found more trouble just making the Mando and hitting another early tree, but she recovered with a backhand roller that stopped just under the basket for a drop-in par to finish the day one-under par and in sixth place.

Round 2 action kicks-off on Wednesday as the MA1 field moves to Mesker Park and FA1 moves to Pride's Creek.

Follow all the action with our Scores & Coverage page.

Grant Zellner and Jennie Weigand contributed to this article.