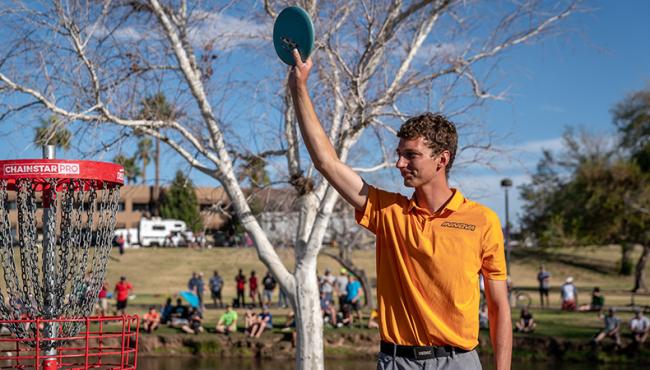 Just as he did in 2019, Calvin Heimburg kicked off the 2020 PDGA Elite Series with a win. This time, it was at the Memorial Championship. Photo: Alyssa Van Lanen

Calvin Heimburg knows how to start the year right.

The 24-year-old Floridian won The Memorial Championship on Sunday, the second year in a row he’s won the first Elite Series event of the touring season. Heimburg birdied holes 5 through 14 en route to his 11-under-par performance, besting Eagle McMahon by a single shot.

“It feels awesome,” Heimburg said right after the awards ceremony. “It always feels great to get a win, especially early in the season, and feel like you accomplished something. I hope to ride that momentum through the rest of the season.”

Heimburg started the day one shot back of Colorado phenom McMahon. The battle between two of the longest arms in the game delivered, as the duo threw crush after crush on the very attackable Vista del Camino XL layout.

The first big mistake happened early, as Heimburg missed a circle 1 putt on hole 2 as McMahon capitalized with a 25-footer for birdie. A few holes later, McMahon returned the favor, switching his mind at the last moment to a sidearm approach on the par-4 6th before missing his short putt for par. Heimburg jumped on the opportunity, making birdie and getting two shots on McMahon.

Heimburg would proceed to go on a streak of spectacular play, throwing a long drive on the 645-foot, par-4 7th that put him nearly in jump putt range. He followed that up with a circle 2 connection on hole 8, and then put his drive on the notoriously difficult 9th to 15 feet.

The drama continued to build on hole 13, as Heimburg placed his tee shot inside the circle; McMahon ended up just outside. McMahon laid up, leaving the door open for Heimburg.

“I wasn’t really thinking what Eagle was doing, because I knew what I was doing at that point,” Heimburg said. “I was going to run the putt because you can’t lay up a 25-footer.” He canned it, putting him up two shots with just five holes to play. “It was a big swing to go up by two [and] give me a little more breathing room.”

The momentum swung the other way on the par-4 15th, with McMahon hitting a circle’s edge putt and Heimburg missing a 20-footer. That gave McMahon the opportunity to pull it to within one.

“I wasn’t really nervous,” Heimburg said. “It just really didn’t come out of my hand quite right.” The tension continued to ratchet up on 16, as both competitors had long birdie looks but came up just short. Both players made quick work of 17, before attacking the new triple mando on 18.

McMahon’s tee shot was high immediately and drifted out of bounds, effectively sealing the deal for Young Vinny.

“When he missed it, I knew it was pretty much over at that point,” Heimburg said.

It was a disappointing end to an exciting weekend for McMahon, whose title defense came up just a couple shots short. Paul McBeth bounced back from a tough round on Saturday to secure a third-place finish, with Vaino Makela shooting 10-under to move into fourth.

Heimburg is signed up for the Waco Annual Charity Open, but mentioned that he might drop due to logistical issues and wanting to play a couple of A-Tiers closer to home. Until then, he will have The Memorial trophy and a $4,500 check to enjoy.

“It’s awesome to win a big event,” Heimburg said. “There’s so many good players now, you literally have to come out with your best game if you want a chance at winning week in, week out.”

Pierce cruises to victory in Scottsdale 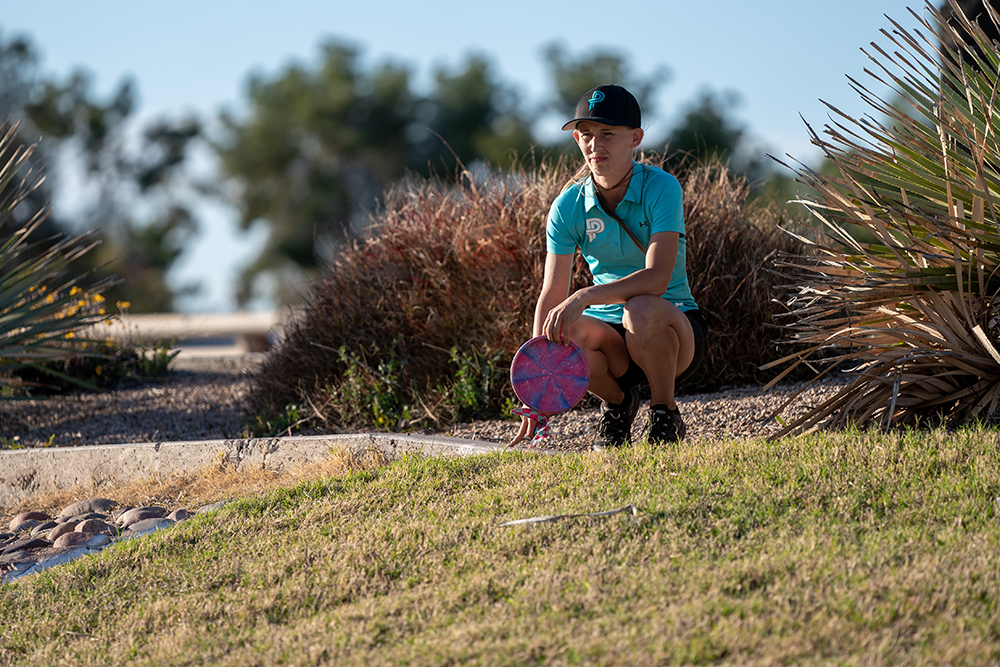 Paige Pierce has won a lot of Memorials. If you want to know how many, though, you probably shouldn’t ask her.

The victory this week was special for Pierce, as this tournament represented her first significant win in 2011. Her sponsor at the time?

“This was my first sponsored win by Discraft, and here I am: Full circle, my first big win of 2020, wearing Discraft again,” she said.

Pierce shot four consecutive four-digit rounds en route to a 14-shot victory, averaging a 1025 rating. Her week was highlighted by a near record-setting performance on Saturday, with her round rated just a few points shy of the highest rated round ever by an Open Women’s competitor. Pierce walked off the course on moving day with an eight-shot lead and only extended her margin on Sunday to cruise past newly transplanted Arizona local Jennifer Allen.

“[My game] feels really good,” Pierce said. “I feel really confident with my discs and the way that my body is working. I feel like my timing is really good. I’m just truly so happy, and I’m ready to keep going.”

The battle for second came down to the wire, with Allen and the Finnish up-and-comer Henna Blomroos going toe-to-toe. Blomroos went into the 17th with a one-stroke advantage, and both players put their putts inside the circle. Blomroos, though, missed her putt and saw her disc roll out of bounds. Allen knocked down her birdie for the two-shot swing and a one-throw lead heading into 18. Blomroos couldn’t navigate the triple mando off her drive, and Allen was able to take down the second-place finish just one week after winning in the Masters Women’s division at Las Vegas.

The Disc Golf Pro Tour takes the weekend off before stopping in Waco, Texas, for the Waco Annual Charity Open from March 12-14.