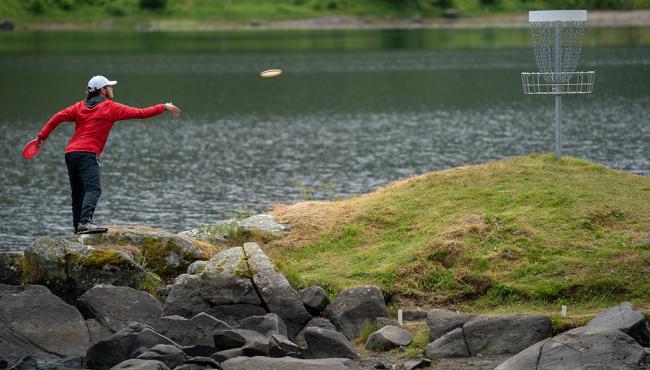 Gregg Barsby found himself looking over the vast fjords on the western coast of Norway, a beautiful disc golf course and a disc golf hungry community behind him.

A destination and experience that is second to none.

“You take a second to look around and realize where you are in the world and what you’re doing,” Barsby said. “At Sula, the water is right there, the mountains, the cliffs – everything. On a clear day when the water is calm, it’s a mirror effect.

“You just have to see it for yourself.”

In 2021, the entire world will get to see what Norway and European disc golf has to offer.

Officially announced on Friday, the Disc Golf Pro Tour will be heading to Europe for the first time to showcase the PCS Sula Open, a PDGA Euro Tour event that will combine the established PCS Open and Sula Open events.

The event will be the first international venture for the DGPT, and will be a joint effort between the PDGA, PDGA Europe and the Euro Tour and is set for July 7-10, the week prior to the 2021 European Open.

“Having the DGPT appearance in Europe is a huge step toward the international recognition of the Euro Tour and European disc golf,” PDGA Europe Tour Manager Matej Verl said. “It starts with the DGPT moving to Europe for one event in 2021. The United States audience will watch the PCS Sula Open and find out that Europe has gorgeous courses they are not familiar with and awesome players that they have never heard of before. This is very exciting for the international disc golf scene.”

Jeff Spring, DGPT CEO and Director, has had his eyes on an European event since stepping into his role.

"For the past year, I've heard from several events and event directors running top level events in Europe. I knew that we wanted to bring the tour to Europe, but finding the right circumstances was challenging," Spring said.

It wasn't until Spring had a conversation with Mike Downes, PDGA Operations DIrector that the pieces fell into place.

Added Spring: "Mike was pivotal in connecting the DGPT with PDGA Europe and Matej and encouraging collboration with an event preceding the European Open. From there discussions took off. After reviewing the PCS Sula Open, it was clear we had an amazing partner"

While the DGPT will plan to provide live coverage on the Disc Golf Network, they haven't committed to it quite yet.

"We hope to stream live coverage on DGN and will be pulling out all the stops to make it happen. We will announce more information about live and other event details later this fall," Spring said.

Deemed as a true Nordic experience for competitors, the two prior events are known for their huge payouts and Viking theme, both of which will be amplified in 2021. The event shifts to Sula in 2021 and the course is regarded as one of the toughest and prettiest in Europe.

“It’s just super cool that the Pro Tour is going over there,” Barsby said. “As far as the kick off for them travelling to Europe, you couldn’t find a better spot for a unique experience when it comes to location and community. It’s a really, really special place to play disc golf and experience the culture.”

Barsby said that he was late to the party when it comes to venturing to Europe but, after his first trip over in 2014, has made it a priority to return every year. Barsby won the 2018 Sula Open, competing with Philo Brathwaite among Europe’s best.

The PCS Open was featured in 2019 by Eagle McMahon and Terry Miller providing coverage.

Names like Paul McBeth, Keven Jones and Cale Leviska – to name a new – were scheduled to compete in the 2020 event, which was cancelled due to the coronavirus pandemic.

“It’s great that they’ve built this relationship with the DGPT,” Barsby said. “The DGPT has a great staff and things are moving forward in a big way so to combine it with the great crew in Norway is just a natural fit because they are two well-oiled machines.

“Adding the Pro Tour element just increases the reason to go over there, if you even needed one, which you don’t. It’s going to be a can’t-miss event.”

A battle, then a celebration.

Keeping true to its tradition and Viking roots, Verl mentioned the tournament will be like Ragnarok, knowng in Viking lore as the final battle were current gods and mankind die and then reemerge in Valhalla, or heaven for the warriors.

After the battle, the community and hospitality aspects take over as the celebration begins.

The event will end on Saturday, giving players and the community a chance to attend the well-known player’s party.

“There’s just such a huge player experience over there and it's truly a destination stop,” Barsby said. “Of course, having the tournament is an amazing thing for European disc golf but having that off-the-course experience with the good times and good people, it just adds so much to it.

“It’s not in the city of a heavily-populated area, per say, so that makes for a really genuine crowd. They’re excited to be there, they’re excited that you’re there and it really just amplifies the experience of the whole thing.”

Added tournament director Sivert Overaas: "The PCS Open crew is more than than excited to be a part of the EuroTour and DGPT in 2021. We had some big ambitions starting the PCS Open back in 2016 and it's crazy to see that five years later, Overas Diskgolfpark will be a venue of a DGPT event. The PCS Open has developed into something very special in a short period of time and, together with our friends from the Sula Open, are ready to present two beautiful courses, some lovely scenery and a unique disc golf experience for the top players in the world. Welcome to Ragnarok!"

Eveliina Salonen tees off during the 2018 Sula Open in Norway. Photo: PA Maseidvag

Due to the global pandemic, disc golf stateside has truly missed the international feel in 2020 but 2021 will provide the opportunity for the entire community to see what disc golf in Europe has to offer – from the hospitality, the views and the ever-rising talent pool.

The event will serve as an Elite Series event, and gain points on the Disc Golf Pro Tour.

“Bringing a points opportunity to Europe has always been a goal. The Disc Golf Pro Tour wants to make it easier for the growing ranks of European pros to gain points on the DGPT, and encourage more travel to the US in the future,” Spring said.

Barsby agreed and, after seeing the talent first-hand over the years, issued a warning.

“It’s going to give so many players the much-need and much-deserved exposure, increase the depth of the field and really just continue to grow the sport on a truly an international level,” Barsby said. “They’re hungry over there for disc golf and it shows. I keep telling a lot of these young guys in the States that they had better get ready and if you want it, you better work hard because there are kids in Norway, Finland, Estonia – all over – that are working hard and treating this like the true sport that it is. They’re going after it and y’all better be ready.

And now, the entire disc golf world will get to see.