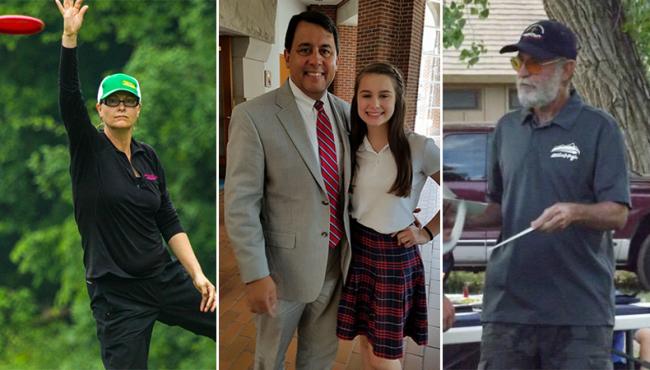 For the first time since the inaugural event in 1993, the Disc Golf Hall of Fame (DGHOF) and the Professional Disc Golf Association will conduct the 2017 DGHOF Induction Ceremony during the 2017 National Tour Elite Series finale event, the Ed Headrick Hall of Fame Classic (HOFC). The tour-ending HOFC will be held on October 13-15 at the International Disc Golf Center (IDGC) in Appling, Georgia, with the induction ceremony taking place on Saturday, October 14th at the IDGC at approximately 6:00pm.

The Disc Golf Hall of Fame is an independent organization dedicated to the promotion of disc golf, its premier pioneers, and players. It was founded in 1993 by Lavonne Wolfe #580 of Huntsville, Alabama. Lavonne also created what is now known as the Headrick Memorial Museum, a collection of memorabilia that help describe the history of our sport, now housed at IDGC alongside of the Hall. The DGHOF celebrates contributors whose passion for disc golf transcends personal gain. Being voted into the DGHOF is considered the highest honor in the world of disc golf. Curtailing on the recent announcement from the Disc Golf Hall of Fame Board of Directors, we are proud to introduce the newest inductees.

HOW AND WHEN SHE BEGAN PLAYING DISC GOLF:

I originally played disc golf in 1992 as a way to enjoy the outdoors, friends and as a break from the rigors of college studies and athletics. I was a Division 1 softball pitcher at the University of Northern Iowa. Armed with one disc and a slew of friends that included Jay Reading, my future husband, I would regularly ride my bike down to play Tourist Park in Cedar Falls, IA. I realized that disc golf was a wonderful lifetime activity that could be enjoyed by all, and that it saved green space in neighborhood communities.

I am passionate about both of these aspects that are naturally highlighted by disc golf and continue to promote and play today because of these characteristics. I joined the PDGA in 1999, while attending a SuperTour event at which a PDGA membership was required. With the knowledge and guidance of Duster Don Hoffman (HOF Class of 2011), I became a vested PDGA member.

I would later meet Glen Whitlock and be introduced to other disciplines of Frisbee sports. After winning my first World Championship in 2002, Legends World Champion Ted Williams came up to me with a kiss and these words, “You will make a fine a world champion and it is a world champion you will always be from this day forward.” I strive to uphold that statement and use my world championships as a platform to promote disc golf, help communities recreate, teach the lifetime benefits of disc golf and encourage educators to implement disc golf into their curriculum.

May we all fly so free.

STATEMENT OF PERSONAL PHILOSOPHY AND GOALS:

To efficiently and effectively promote our game and to work with others to help move our sport into the mainstream.

HOW AND WHEN HE BEGAN PLAYING DISC GOLF:

Introduced to disc golf in 1989 at Pendleton King Park by friends who were all-around competitors.

HOW AND WHEN HE BEGAN PLAYING DISC GOLF (SPORTS):

"I distinctly remember the day I first had the pleasure and experience of throwing my first pluto platter. I was walking through the neighborhood in west Marysville, CA. when we came across two brothers in the neighborhood throwing a plastic disc back and forth to one another. It looked like a lot of fun and just by chance an errant throw landed by my feet and like anyone would do, I picked it up and flew it back to them. There was an immediate rush of excitement that I hadn’t experienced while throwing a ball.

That was in 1960 and it wasn’t until about 3 years later that I would purchase my next Frisbee to get that feeling of excitement and pleasure from something so simple. From that time on I always carried a flying disc of some sort or had one somewhere close by. Through high school, I would throw a disc around, trying new throws and catches with anybody who would fly around with me.

As time went on, I continued to play with a disc more and more often and the passion got stronger as I spent more time playing and creating new skills. Starting Jr. College in 1969, I found myself throwing on the open lawns between classes with anyone willing to play catch. In 1970 I entered one distance throwing competition on campus that I won with a thumb throw probable distance of around 210 feet."

Nice to see you in Hall of Fame Des.I grew up in Waterloo- Cedar Falls and remember playing those courses.Congratulations!

Well deserved John.Johnny Roberts is beaming down on you.Love and Respect.