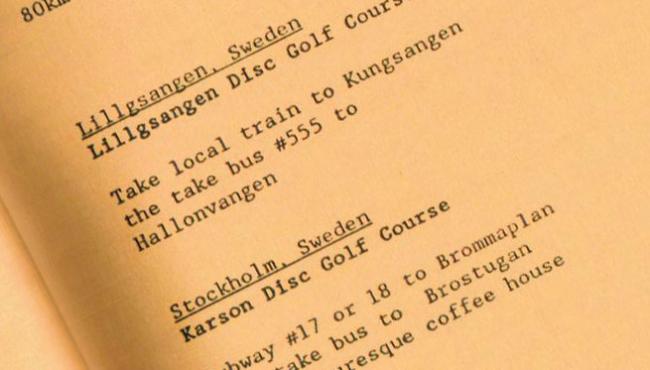 Gathering course information outside of the United States has always been a challenge. For those who enjoy statistics, the 1984 Course Directory had six Canadian courses, two of which were misidentified temporary courses. 1986 listed an additional eight Scandinavian courses. The 1990 directory had 32 non-US courses, in 1993, the number went up to 50. Two years later in 1995 the number broke triple digits with a total of 110. In 2002, the total grew to 219, and then to 337 in 2007. At the end of 2011, there were 499 non-US courses in the PDGA Course Directory. At the end of 2015, there were 1113 active courses, and that number continues to grow.

This growth would appear to be exponential, however, outside of Finland, much of the increase can be attributed to courses finally being added to the PDGA database that had not been previously reported. We suspect that there are still very many courses out there of which we are unaware. 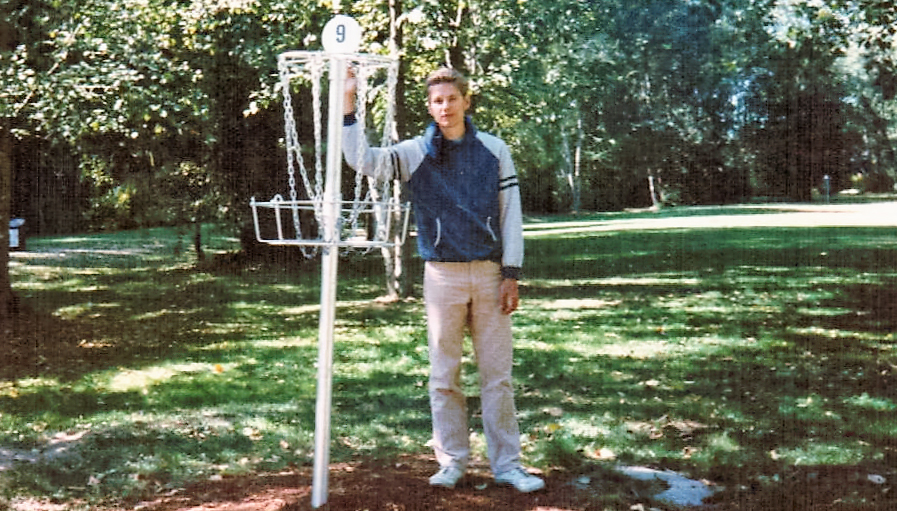 Eric Vandenberg #3089 beside one of the original nine knockoff baskets at Winskill Park, Tsawwassen, British Columbia, Canada. This is the oldest know basket course outside of the United States (some claim a 1976 Install). Photo taken in September 1988 by Elaine King #3090.

The following is a list, by country, of what we currently believe to be the earliest basket courses. If the target was originally not a basket, then the installation year will not match the year that baskets were installed, but the list is ordered by year of basket installation. Courses that have since been removed are crossed out. A list of the earliest five courses per state in the United States has already been released.

If you have documented evidence of different dates, we strongly encourage you to send us your feedback to help us correct our information. Although we would prefer that you contact us directly with any corrections to this early course information, anyone with an account on PDGA.com can edit the PDGA Disc Golf Course Directory to add new courses or update existing courses.

Don't have a PDGA.com account? Create one for free now and start editing, adding, and updating courses today!

Note: You do not have to be a PDGA member to create a login on PDGA.com.

Call me a disc golf dork if you want but I find this stuff really interesting. Thank you for all of your hard work, Eric.