Children - The Real Winners of the St. Jude Charity Invitational

Children - The Real Winners of the St. Jude Charity Invitational

Although there were champions crowned in each of the 11 divisions competing at the inaugural St. Jude Disc Golf Charity Invitational in Seaside, CA this weekend, the real winners weren’t the best disc golfers on the courses. This was a very special disc golf event. One in which the individuals who walked away with victories knew that their wins, although impressive, were but a small part of the bigger picture.

The real winners of the St. Jude Disc Golf Charity Invitational are all of the children that will be helped with the funds raised by the disc golf community worldwide. The donations are still coming in, but as of right now the grand total sits at just under $215,000! Wow! What an accomplishment from our small but steadily growing community! We are so proud to have had a part in this venture and we can’t thank those involved enough. The opportunity to partner with St. Jude Children’s Research Hospital has been truly a blessing.

Fundraisers were allowed to solicit donations as an individual and/or as part of a team. Here are some of the top fundraisers as of tonight, 5:40pm PDT.

Paige started the round in the lead, but only by a single stroke over all three of the others who were gridlocked in a 3-way tie for second place. Throughout their round on the St. Jude Headrick Disc Golf Course, designed by disc golf visionary Jussi Meresmaa #14600, the name at the top of the leaderboard changed several times.

With just six holes to go, the fight was as close as ever. It was less a battle for birdies as it was for playing smart and playing safe, as pars were the name of the game. On the 16th hole, Catrina carded the only bogey, allowing Val to tie her up, meaning they were tied for the lead with Paige and Jessica right at their heels. Val and Cat finished Holes 17 and 18 with identical scores, forcing them into a sudden death playoff.

They would again tie on the first hole of the playoff. And then again on Hole 2. Val positioned herself for the win on Hole 3, but she would need to make the jump putt below, in the wind, with nothing but OB sand traps behind the basket. Showing once again why she is a 3X PDGA Pro Women’s World Champion, she nailed it for the victory!

What a sick putt for the win!!! Val Jenkins is your first St Jude DG Charity Invitational winner! Congrats! pic.twitter.com/lLK1ENxHY5

This was a special event to be a part of as it is the start of a great partnership with disc golf and St Jude Children's Research Hospital. It was an honor to represent disc golf in this light as we came together as a family to support this great cause through fundraising and awareness. Our sport is truly unique in the way that we all come to together to help those within it. This tournament allowed us to show our generosity and help the children and families of St Jude.

As a tournament, this field was just as strong as it is at every PDGA Major and National Tour event, and it felt great to win. Every year it will become more difficult in the women's field and that's a good thing. I'm happy to be a part of this movement, an incredibly competive division that you have to play your absolute best to win. You know there's always someone on your trail with that same goal.

Much like the DeLaveaga Disc Golf Course at the Masters Cup, the St Jude Headrick Disc Golf Course is not for the weak. It was designed with the intent of testing the skills of the world’s top players, and test them it certainly did. As a point of reference, the best score turned in all weekend on the course was -5 (57). It was shot once by the eventual winner of the Open division, Will Schusterick #29064 during Round 1, and once by Bobby Musick #15911 during Round 2, boosting him from 24th to finish tied for 7th place with Dave Feldberg #12626.

Schusterick started the final round with a three throw lead over Paul Ulibarri #27171 and a four throw lead over six other top players in the world, all of which were tied in third place after carding -1 for the first round. At the end of the front nine, Ulibarri and Jeremy Koling #33705 were tied for second place just one throw away from tying it up with Schusterick. However, the other men on the lead and chase card were still easily within striking range.

The back nine saw new but familiar names making a run at the leader. Paul McBeth #27523 and Steve Rico #4666 were on a tear, carding birdies where others could only hope for a par. Coming into the last hole of the tournament, Schusterick still held a two throw lead. Hole 18, an 814 foot left-to-right par 4 with a basket guarded by OB bunkers, tees off into a brutal headwind. Many players felt it played more like a par 5 instead of a par 4, due to its difficulty. Schusterick's tee shot was safe, but he followed it up with a shot that skipped just over the lip of the bunker.

Keep in mind, playing on a ball golf course of this caliber is not something the general rules of disc golf were designed for. For this very reason, it was stated at the players meeting that if a disc were to land in one of the areas where the OB line was not easily distinguishable, e.g. the edge of a bunker where the line between sand and grass is blurry, the benefit should go to the player. Will's disc fell into one of those gray areas, and after much debate, his throw was ruled inbounds.

"When I saw my disc on 18 and where it was laying, I couldn't help but smile. Although the stroke I would have taken wouldn't have mattered, since I won by two, I had to smile a little. After 36 holes, it could've come down to less than half of an inch", said Schusterick after the round. 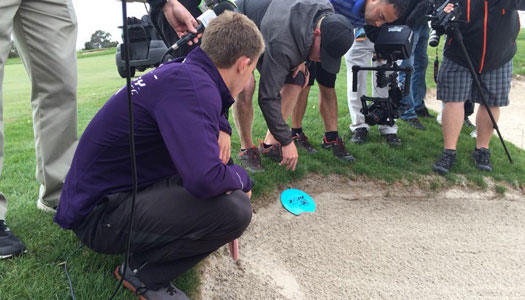 Will Schuertick, Steve Rico, and Michael Downes (PDGA Events Manager/Rules Marshall) debate about whether or not Will's disc is in play. It was eventually ruled inbounds; benefit of the doubt to the player.

Being able to compete in, rasie money for, and win this special event was an eye-opener for Schusterick.

Ever since I went to St. Jude Children's Research Hospital in Memphis, TN a few months ago and actually saw first-hand all of the children that needed help, I started to think of this event a little differently. Being from Tennessee, about a 3 hour drive from St. Jude, I really wanted to be able to help change children's lives with something that changed my own life, disc golf.

Congratulations to Will Schusterick, Val Jenkins, Kevin McCoy, and all the other winners of the inaugural St. Jude Disc Golf Charity Invitational! And of course, thank you to anyone and everyone that helped raise $214,000+ for such an amazing charitable institution, St Jude Children’s Research Hospital. We can’t wait to work with them again for another incredible event in 2016!

Videos of the event are already available on the St. Jude Charity Invitational video announcement, and we’ll be updating it as soon as new videos become available. Follow the PDGA on Twitter and Facebook for updates, pictures, and links to the videos as they become available on YouTube.

On behalf of St. Jude - we are delighted to be welcomed as we have been into the Disc Golf community!